Following its being called out by ABC Media Watch the other day over its crude attempt to pretend Australia’s plain packaging law is not working, Murdoch title The Australian has fought back: in a righteous, rambling and shamelessly self-justificatory editorial, it claims Media Watch was playing the man, and not the ball. Then it goes after Media Watch’s sources, playing, er, the man and not the ball. 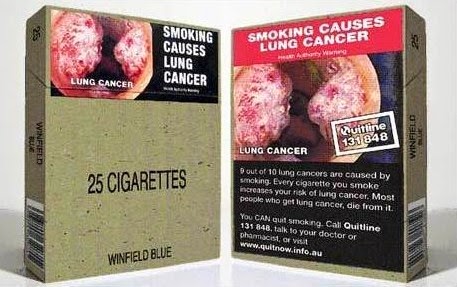 And in an eyebrow-raising move, The Australian is complaining about Media Watch: this is rather like the Murdoch or Rothermere press complaining to Ofcom about the hated BBC. Similar language is deployed: accusations are made of “Big public broadcasting” and “taxpayer-funded activism”. But elsewhere, the shilling for Big Tobacco is encountering resistance.

And it notes that “It was a great scoop. Except it isn’t true ... In fact tobacco consumption in Australia is at its lowest since statistics were first gathered in 1959”. Public health expert Mike Daube is quoted as telling “the tobacco companies want stories ... that will say plain packaging hasn’t helped in Australia. That’s the main game for them at the moment”.

So opinion formers in Ireland are forewarned: meanwhile, The Australian is being opposed by the Australian Medical Association (AMA): “AMA President, A/Prof Brian Owler, today condemned The Australian’s front page promotion of smoking and Big Tobacco, and its constant attacks on tobacco plain packaging legislation, one of the greatest public health initiatives in Australia’s and the world’s recent history”.

And, as for the idea that plain packaging laws might be repealed, “A/Prof Owler said today that Australia’s leadership on tobacco control, including the plain packaging laws, has bipartisan support and has been applauded by public health advocates around the world”. So that’s another hare that won’t be running anywhere soon. The Australian Department of Health confirms the recent decline in smoking.

“Recent figures released by the Australian Bureau of Statistics (ABS) show that total consumption of tobacco and cigarettes in the March quarter 2014 is the lowest ever recorded, as measured by estimated expenditure on tobacco products”. Yet The Australian said sales were rising. Investigative journalism, and shilling for Big Tobacco, are not the same thing – it’s no use pretending otherwise.

But good to see the Murdoch empire is consistently dishonest around the globe.
Posted by Tim Fenton at 10:42

So let me get this straight. Big Tobacco is campaigning against plain packaging because (they say) it actually *increases* smoking? They object to an initiative that increases (they say) their revenue and profits?

I bet that goes down a storm in Marketing...

It was McTear V Imperial Tobacco. Here is the URL for both my summary and the Judge’s ‘opinion’ (aka ‘decision’):

(2.14) Prof Sir Richard Doll, Mr Gareth Davies (CEO of ITL). Prof James Friend and
Prof Gerad Hastings gave oral evidence at a meeting of the Health Committee in
2000. This event was brought up during the present action as putative evidence that
ITL had admitted that smoking caused various diseases. Although this section is quite
long and detailed, I think that we can miss it out. Essentially, for various reasons, Doll
said that ITL admitted it, but Davies said that ITL had only agreed that smoking might
cause diseases, but ITL did not know. ITL did not contest the public health messages.
(2.62) ITL then had the chance to tell the Judge about what it did when the suspicion
arose of a connection between lung cancer and smoking. Researchers had attempted
to cause lung cancer in animals from tobacco smoke, without success. It was right,
therefore, for ITL to ‘withhold judgement’ as to whether or not tobacco smoke caused
lung cancer.

[9.10] In any event, the pursuer has failed to prove individual causation.
Epidemiology cannot be used to establish causation in any individual case, and the
use of statistics applicable to the general population to determine the likelihood of
causation in an individual is fallacious. Given that there are possible causes of lung
cancer other than cigarette smoking, and given that lung cancer can occur in a nonsmoker,
it is not possible to determine in any individual case whether but for an
individual’s cigarette smoking he probably would not have contracted lung cancer
(paras.[6.172] to [6.185]).
[9.11] In any event there was no lack of reasonable care on the part of ITL at any
point at which Mr McTear consumed their products, and the pursuer’s negligence
case fails. There is no breach of a duty of care on the part of a manufacturer, if a
consumer of the manufacturer’s product is harmed by the product, but the consumer
knew of the product’s potential for causing harm prior to consumption of it. The
individual is well enough served if he is given such information as a normally
intelligent person would include in his assessment of how he wishes to conduct his
life, thus putting him in the position of making an informed choice (paras.[7.167] to
[7.181]).