Gove May Be Finished

Those of us who follow the machinations of Michael “Oiky” Gove – and especially his retinue of polecats – know all about the faux facade of politeness that is used to mask a culture of vicious abuse towards opponents, together with using his pals in the press to slag off others on a strictly non-attributable basis. But, it seems, “Oiky” has just tried it on with one opponent too many. 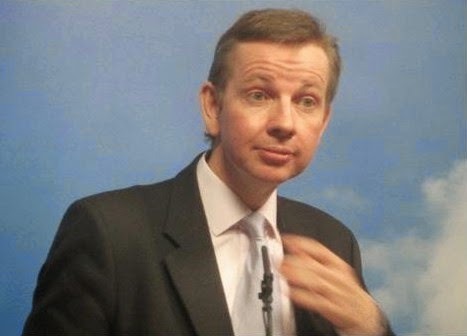 That is because this laughably overrated squirt picked on Home Secretary Theresa May for his latest attempted offload of bad news. This was achieved by running to his former pals at the Murdoch papers and blaming someone at Ms May’s department for not doing what those on Gove’s manor have themselves not been doing. The idea of having the spine to ‘fess up is clearly alien to him.

Some may find it particularly cheap and cowardly for a Minister Of The Crown to sidle up to Rupe’s allegedly upmarket troops at the Times and say, effectively, that he would rather like it if they would put the boot in on the Home Secretary, and especially her counter-terrorism advisor Charles Farr. In pursuit of this, he would give them a few crumbs of information around which they could build the story. 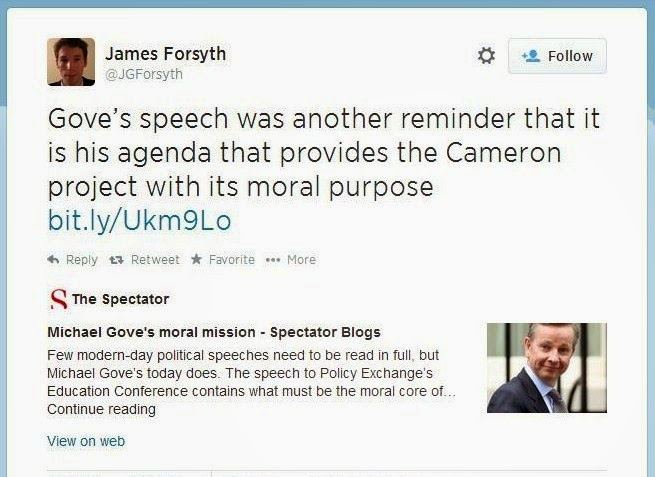 Have that slice of idiocy framed!

And there are those within the Fourth Estate who believe this kind of behaviour to be not merely acceptable, but perfectly excusable or even of high moral tone. I kid you not: one look at the Twitter feed of the Spectator’s James Forsyth is all you need to do. “Gove’s speech was another reminder that it is his agenda that provides the Cameron project with its moral purpose” he gushed yesterday.

Sly attacks on colleagues in order to bodyswerve one’s responsibilities, on top of the systematic alienation of the teaching profession and gratuitous smearing of the educational establishment, along with turning education into not just a political football, but using questionable and often dishonest tactics in so doing, is, I have to remind Forsyth and those of like mind, rather less than a great moral crusade. 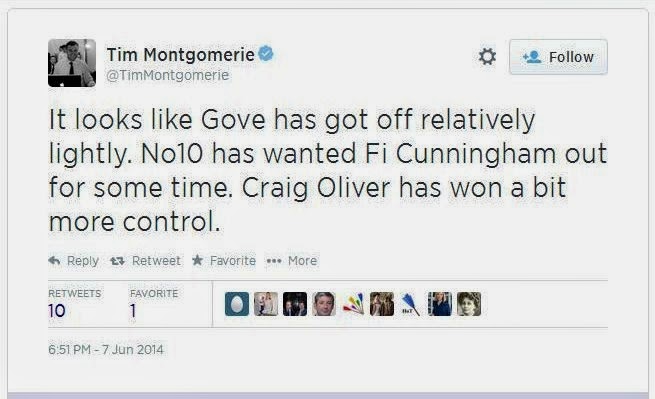 And the ideological blindness towards Gove’s disgraceful, disloyal and crashingly inept behaviour extends to the serially clueless Tim Montgomerie, away somewhere in Murdoch La-la Land, who happily opined “It looks like Gove has got off relatively lightly. No 10 has wanted Fi Cunningham out for some time. Craig Oliver has won a bit more control”. Every day, and in every way, he’s getting better and better.

What so many on the right cannot understand is that “Oiky” Gove has been, in the words of Lyndon Johnson, “inside the tent pissing out” more or less since the Coalition was formed. This time he got caught pissing without opening the tent flap first. And the result was that everybody now knows just what a principle-free sleazebag he is. From here, the only way is downhill.

I doubt he'll be fired. The Bullingdons regard the government of the country as a club perk rather than a public duty, and they don't sack their chums.

I was going to post something ismilar to Philip - he's too much a part of the Cameron/Osborne inner circle to be sacked, and is clearly one of the Tory-approved 'stars' of this administration, with control over what they clearly hope will be their main legacy (free schools, even if they are unpopular with the public in general).

But having seen Tim Montgomerie today arguing that he should be moved, and (correctly) calling him a liability who's fucked most of the Tory reforms up by trying to enact them too soon and alienating every single teacher in the country, I'm not so sure.

This 'polite' thing really pisses me off. What it means is he's a former journo and commands journo loyalty as a result - it's only recently that people like Nick Cohen have started to criticse him, previously viewing him as some sort of weird kindred spirit. But all he has is that loyalty. That's it. He's demonstrated absolutely no actual 'politeness' in anything he's done since coming into office - in the cabinet he tries to undermine people who have disagreed with him by appealing directly to his mate Dave after the event, and in September he was yelling that anyone who voted against action in Syria was literally a fascist.

Weirdly for someone who used to write for an audience, he is the politician who best exhibits the disconnect between Westminster and the country at large. He is, in general, loathed by the population, yet despite the myriad reasons why the public rightly dislike him (both personal and policy-based), his mates in the bubble seem to think he's ace.