Uber And Black Cabs – Someone May Not Get It

Drivers of London’s “Black Cabs” have today been protesting about the failure of their own licensing body – that would be Transport for London (TfL) – in not acting to define the role of Uber in providing transportation within the Capital. The failure not only of TfL, but also of many punters to understand what is involved, I’ve covered previously. But there are still many who don’t want to get it.

A London taxi, demonstrating features that mean it is not the same thing as a minicab, however that is summoned

Too many of those, mostly but not exclusively out there on the right, have decided this is a battle between liberty and servitude, of right versus left, of plucky underdog versus vested interests, of new, innovative and “disruptive” technology versus staid refusal to progress, of choice versus enforced conformity, and, ultimately, of right versus wrong. For them, Uber is in the right. 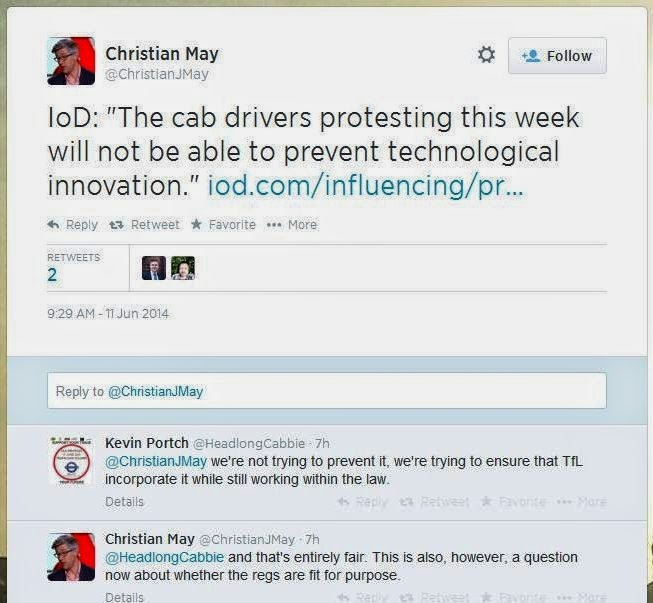 Behold a bringer of soundbites

Why? Well, it’s written, that’s why: it’s “innovative”, it’s new, and you can do it all on your smartphone. It therefore appeals to all those good Conservative Clever People Who Talk Loudly In Restaurants, and no finer example of this genre can be found than the current media face of the Institute of Directors (IoD), Christian May, who may get the media’s appetite for soundbites, but not what it’s all about. 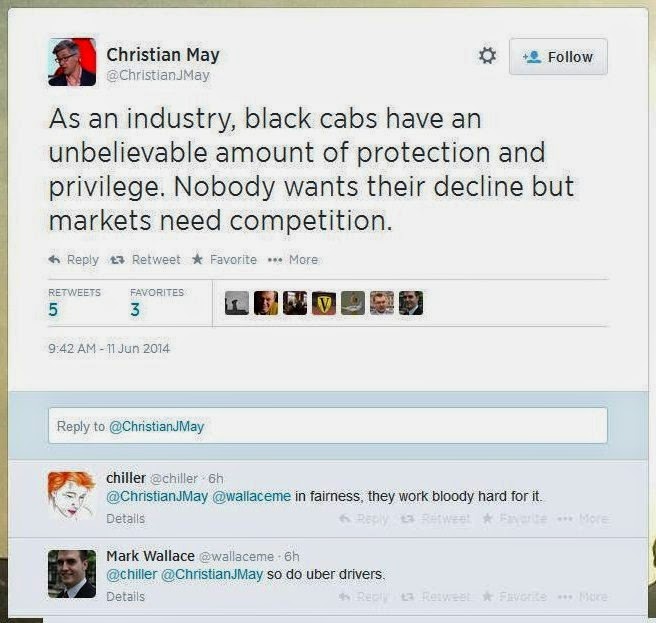 And again I bring you soundbites

“The cab drivers protesting this week will not be able to prevent technological innovation” he declares. They, as was then pointed out to him, are not trying to do so. “As an industry, black cabs have an unbelievable amount of protection and privilege.  Nobody wants their decline but markets need competition” he asserts. If it were about competition, the war would already have been fought over minicabs. 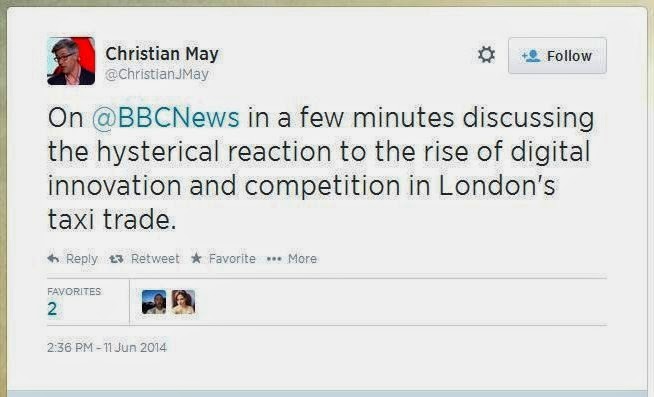 Now it's soundbites versus hysteria!

Black cabs and Uber vehicles are not a like-with-like comparison, despite the attempt of May’s predecessor Mark Wallace to suggest that their drivers work as hard. This is arrant bullshit: when did an Uber driver last pass The Knowledge? But on went May: “on [BBC News] in a few minutes discussing the hysterical reaction to the rise of digital innovation and competition in London’s taxi trade”. 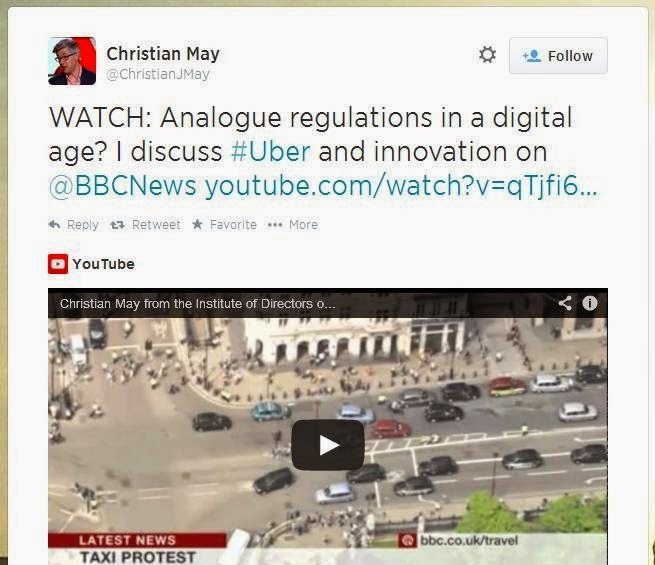 Soundbite or accidental Partridge? You decide ...

Uber is not part of the taxi trade; their drivers are not taxi drivers. Nor do cabbies make the rules, though they would like TfL to wake up and start sorting them out. Yet on goes May: “Analogue regulations in a digital age?” he asks, and presumably in all seriousness. If only he had read David Meyer’s piece explaining where the black cab drivers are at right now. They have a genuine complaint. 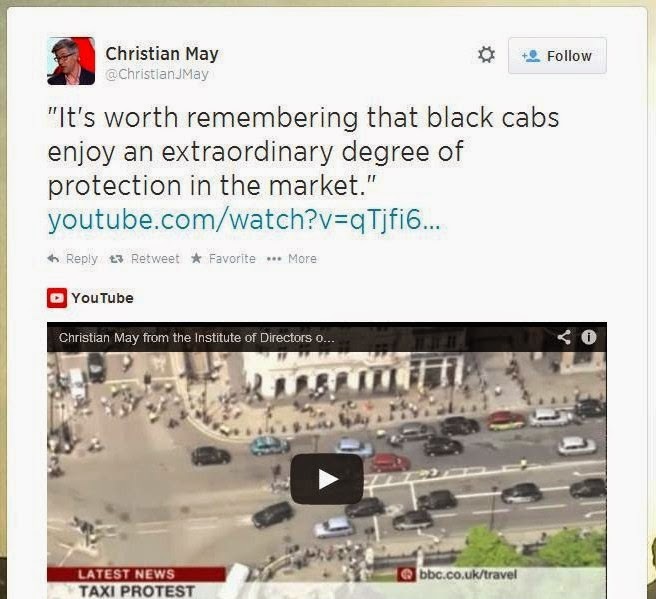 Instead, on goes Mr Soundbite: “It’s worth remembering that black cabs enjoy an extraordinary degree of protection in the market”. Repeats already, and no explanation that this “protection” doesn’t stop competition. Nor does May explain why it is A Very Good Thing to stand up against the little man – cabbies are sole traders, one-man bands – and in favour of the likes of Goldman Sachs.

Christian May may spout his soundbites. But he may still not get it.
Posted by Tim Fenton at 17:19

Every Uber driver I've had so far actually has been a taxi driver - they've just switched from minicabs to Uber because they make - and I quote - "way more" money while punters pay less. I've not had a bad experience yet, and for convenience and price I'll keep using it.

So former *Minicab* drivers, not *Taxi* drivers, then.

That comment proves u don't understand. In London a "taxi driver" needs to have passed "the knowledge of London". A minicab driver and an uber driver are the same thing. Both are unqualified men in cars who follow a satnav. A taxi driver has an enlarged hipocampi that he uses to navigate the complex road system of London. They also do untold amounts of charity work and give free rides to war veterans...and also take guide dogs and gays...