The obsessive pursuit of former BBC presenter (and Strictly participant) Susanna Reid by the obedient hackery of the legendarily foul mouthed Paul Dacre continues, as the Mail maintains its narrative on Ms Reid’s new berth, ITV breakfast offering Good Morning Britain. That narrative is, as before, that the new show is a flop, and it can only be a matter of time before it goes the way of predecessor Daybreak. 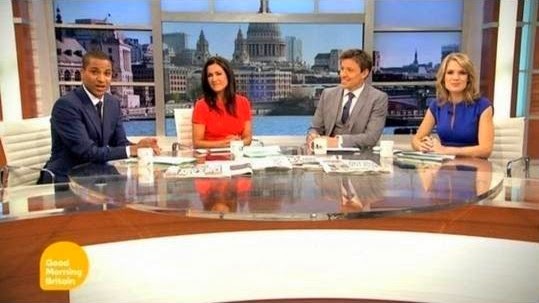 But here a problem enters: GMB’s viewing figures are, generally, not so bad. This is not a problem to the Dacre doggies: all they need do is wait for a Bank Holiday Monday – and, be honest, not so many will be up and about before 0830 hours, with those that are leaning towards the more established BBC show – to selectively quote those figures and give them the thumbs down.

And so it came to pass: May brought two Bank Holidays, the second extensively quoted by the Mail: “However, last Monday just 270,000 viewers watched the show, according to The Sun, and despite it being a Bank Holiday, 1.17 million people still tuned into the BBC rival - which had a 34.7 percent of the audience share, compared with Good Morning Britain's 9.5 percent”.

Yes, the Murdoch Sun had kicked this one off, but no paywall payment is needed as the Mail lifted the story (see how that works, Rupe?). Then all that was needed was a “source”, and the Super Soaraway Currant Bun got a “senior” one from ITV (don’t tell me, they have a concierge who is turned 65). This “senior source” duly gave Rupe’s downmarket troops exactly the news they wanted to hear.

“‘No-one is expecting to beat the BBC and no-one is expecting to get over a million viewers,’ the source told The Sun's Colin Robertson. ‘But we do want it to get above 15 percent - or it is toast’”. But, away from Bank Holiday Mondays, GMB is getting more than 15% of viewers. And if ITV find anyone so defeatist as to assert they can’t beat the Beeb at something, they won’t be speaking for ITV for long.

In any case, the Mail’s story doesn’t hold water: “Between its debut to [sic] May 28 Good Morning Britain attracted an average audience of 584,200, 15.2 percent of the audience share, compared with Daybreak's average of 673,800, or 16.6 percent, during the same period last year. In the months before it was axed Daybreak was attracting an average of around 600,000 viewers”.

So GMB is faring no worse than Daybreak, which had lost viewers since last year. And over at the Independent, they have bad news for the Mail: “There are ‘no plans to axe’ Good Morning Britain despite a recent ratings drop, ITV has confirmed ... according to an ITV spokesperson, the show is far from doomed yet”. And the Indy spoke to a real spokesman, not a mere “source”.

Which means the Mail is just recycling speculation. No change there, then.
Posted by Tim Fenton at 17:35

Numbers, numbers everywhere and not a drop of sense. I really dislike the way the media presents statistics - either mendaciously or through ignorance. Randomly swapping between percentages and raw figures, depending on what is more seemingly doom-laden. Provide context or don't bother.

And.... how many of those potential viewers are children? I can't imagine they'd give much thought to the ramblings of either Breakfast or GMB.