Bashing the NHS is one of the right-leaning press’ favourite pastimes. It is an equally popular topic with all those small state libertarians shilling eagerly for the rich and greedy, the kind of people who already pay to go private and don’t like the idea of their taxes contributing to a service which also admits the lower orders. The result is that many believe the NHS does poorly, compared to other countries.

Readers are told that the “free at point of use” model, with no charges for seeing the doctor or attending hospital to see a consultant, is unsustainable, and should be replaced with something like they use in a range of other countries, which often includes France, Switzerland, and the USA. Recent press coverage has been used to reinforce this negative view of the NHS. 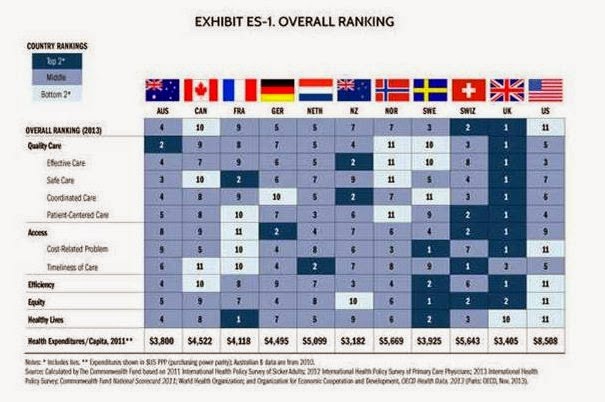 It gets worse. Toxic hip replacements caused the deaths of 40 patients: the NHS is therefore bad. The NHS has an “alarming” culture: it is therefore bad. As Sir Sean nearly said, I think we got the point. So just how bad is the NHS, relative to other countries’ health provision? For all of you right-wing Kool-Aid drinkers, the answer is going to come as something of a shock.

“NHS is the world's best healthcare system, report says”. Wait, what? That can’t be right – it’s in the deeply subversive Guardian. Some rotten lefty outfit must be behind it, right? Wrong: “The report has been produced by the Commonwealth Fund, a Washington-based foundation which is respected around the world for its analysis of the performance of different countries' health systems”. 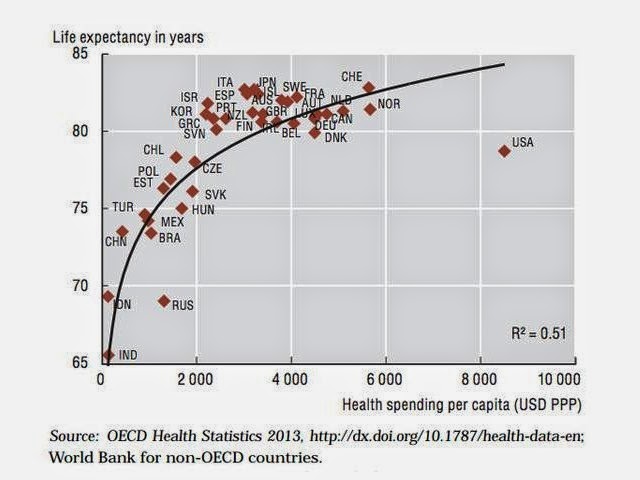 Life expectancy vs health spending - from OECD via Daily Kos

The NHS “spends the second-lowest amount on healthcare among the 11 – just £2,008 per head, less than half the £5,017 in the US”. Of the eleven countries, the USA came last. That one fact led the Daily Kos to conclude “We have a crappy healthcare system”. It’s a message that will either go unheeded or generate hostile feedback: the USA doesn’t like to be told it does anything less well than others.

But the results are there for all to see, including the OECD analysis of healthcare costs plotted against life expectancy. So when you read yet another NHS bashing article in the right-leaning press, ordered up by an editor and senior staff who all go private, or yet another proposal for a public sector that does not include the NHS, remember what those in the USA say about our system versus theirs.

The NHS – actually very good indeed. What you will not read in most papers.
Posted by Tim Fenton at 17:31

Don't you find it "strange" that the NHS score 1st in pretty much all categories but second to last in the only one that really matters : healthy lives ?
I'm not saying that the NHS does a crappy job (far from it), but when compared to the OECD graph it significantly underperforms against all those other European countries who scored bad to average (but good to 1st on healthy lives)

call me a sceptic, but I can't help to think that the report was "tailored" to certain healthcare model.
a bit like PISA test rewards rote learning ...

much better a public health system that actually works to raise everyone life expectancy, than give a great service only to the fews.

All I can say is that I have 3 American friends living in UK, 2 of whom now have Britsh citizenship. They all tell me we don't know how lucky we are to have the NHS.

I think we take it for granted and we must not let it be sold off to the highest bidder.

Replying to anonymous; i live in France, and have seen rather more of the health systems in both France and the UK than I would have chosen.
The biggest difference is expenditure. The French spend far more and the system is not just to cure the ill, but monitor and advise the well.
You can see your GP - usually the same day , and he recognises you!
My UK Gp told my wife that health monitoring was a waste of money, but my French GP is very keen,

like anon I noticed the glaring "healthy lives" number. But that's an area of policy where NHS isn't in control, much of it is down to local councils. And even if you have a good one, nothing they suggest is legally enforceable. You have the right to make yourself ill - and to then blame the NHS for not making you better.