There appear to have been more departures from the less than totally happy ship that is the Telegraph, with the recipients of marching orders in some cases professing themselves happy at the mutually agreeable way in which they have been given the chance to jump via letter of totally unforced resignation, rather than being pushed, which would look terribly bad on their CVs. 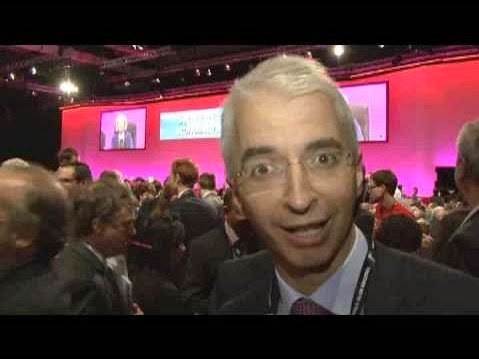 Least surprising of those being ejected was Benedict “famous last words” Brogan, who may be hoping that he can “re-rat” back over to the Mail, especially if, as is looking likely, the legendarily foul mouthed Paul Dacre is prevailed upon to shuffle off to do more of his anger management therapy on his Scottish estate, and Tony Gallagher is installed as editor in his place.

But not predicted was the exit of Damian Thompson, clueless pundit of no fixed hair appointment, who Tweeted “Announcement: I’ve left the Telegraph in an entirely amicable parting of the ways. That’s all for now, but watch this space, dudes” earlier today. Why so? An early episode of “Dude, where’s my editor?” perchance? But, as Clive James might have put it, I digress. 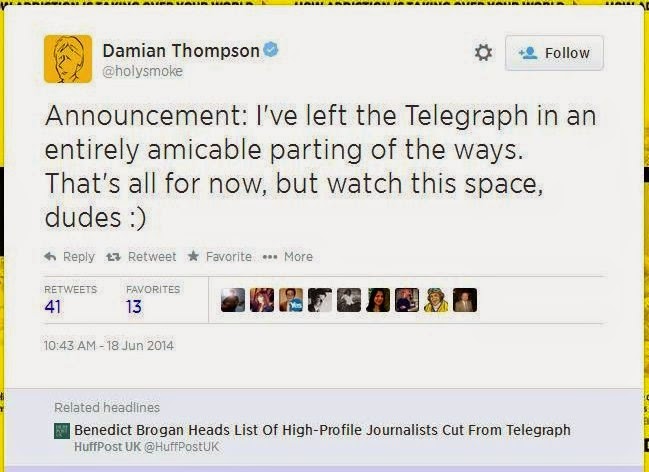 A funny thing happened on the way to the hairdresser

Dames had been not just one of the Tel’s punditerati, but also editor at the bear pit that is Telegraph blogs. And, whatever his successes as an editor, of late this has been looking tired and predictable. Where the deeply subversive Guardian can call upon a host of contributors for Comment Is Free, Tel blogs has become reliant on a few tedious fixtures seeking after clickbait.

Moreover, far too much of the comments section below each post is filled with ranting that varies only inasmuch as it veers from bigotry to Europhobia to climate change denial to anti-Semitism to Islamophobia to forthright abuse, before the moderators arrive – usually too late – and delete anything prejudicial, which means most of it. And chasing that clickbait is the sole cause of that problem.

Added to that, the real star as far as getting clicks was concerned, James “saviour of Western civilisation” Delingpole, has upped sticks and joined the batshit collective that is Breitbart London. Those that are left, like Dan Hodges whining about Mil The Younger, and the loathsome Toby Young telling everyone how Michael “Oiky” Gove should be running the country, are Tedious Maximus.

It’s interesting that the Mail tried something similar with Right Minds, only to scale back on that operation soon after its launch. Telegraph blogs is a free to view area on a website that is otherwise trying to make money, yet all it did was to become infamous for its comments sewer and writers who, mostly, nobody took seriously. How long before it follows Dames into another of those “amicable” partings?

The bear pit that is Telegraph blogs: for a time, perhaps, but not for all time.
Posted by Tim Fenton at 17:31

I hadn't heard of Breitbart London before, so I looked them up and was greeted with this: http://www.breitbart.com/Breitbart-London/2014/06/18/Bloodbath-at-the-Telegraph-how-the-house-journal-of-the-Tory-shires-lost-its-way

'Many of them come from disgruntled ex-Telegraph readers, furious at the studiedly centrist direction their paper has taken, yearning for more of the red-meat conservatism and/or libertarianism which these days they can find almost nowhere in the UK mainstream media but which is Breitbart's raison d'etre.'

'Telegraph blogs was the only place to be. At least it was if you thought that the media desperately needed a counter to the almost overwhelmingly left-wing online narrative'

ha ha! bang on, gareth. delingpole has disappeared up his own unwashed sphincter since departing for bret.. bright..whatever it's called. I didn't even know of its existence until tim pointed it out. does anyone know how many hits this joke of a site gets? I've looked at it a few times and it's beyond parody.

Glad you picked up on the Islamophobia on MyT and Torygraph blogges.

Seems like they're gearing up to do the whole Buzzfeed-style thing.