The so-called Trojan Horse plot in Birmingham – which wasn’t – concerned secular schools. In Islamic faith schools, which, like Christian ones, are allowed in the UK, segregation of pupils and wearing of headscarves by girls is permissible. And there is little that education regulator Ofsted can do to change this, but that is not stopping self-appointed know-all Louise Mensch from another pointless rant. 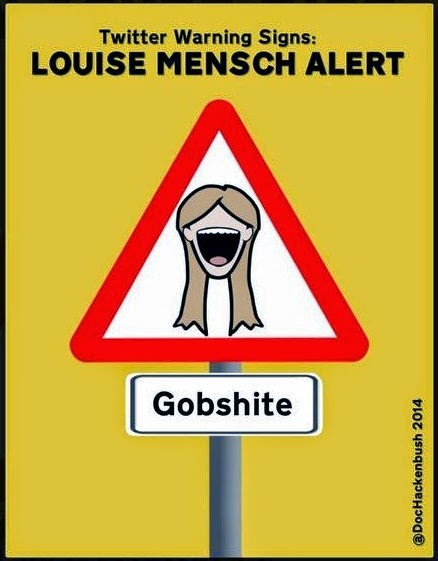 “Ofsted’s guidance on segregating girls and forcing them to wear headscarves is utterly illegal. The Government MUST say so” she wibbled earlier, following up with “I am sick to freaking death of this Government putting Islamist appeasers above the rights of women and girls, esp Muslim girls”. But faith schools can carry the trappings of, er, faith. What is her problem? What does she hope to achieve? 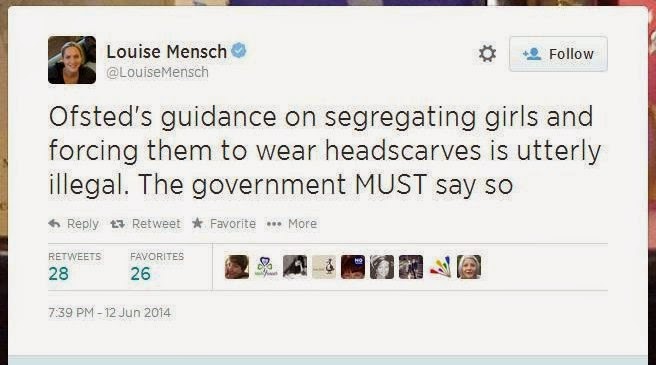 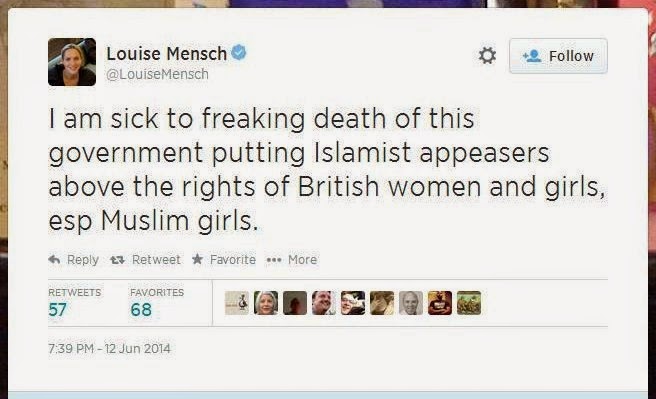 “The Govt has allowed Sharia tribunals to carry on and it will allow Wilshire to state girls can be segregated? Girls forced to veil? HELL NO”. A headscarf is not a veil, and nobody called Wilshire is involved. But do carry on. “Better do something about this. We are the party of Thatcher. I didn’t join the Tories so you could tell girls to sit apart and cover heads”. So go on, make a pointless gesture. 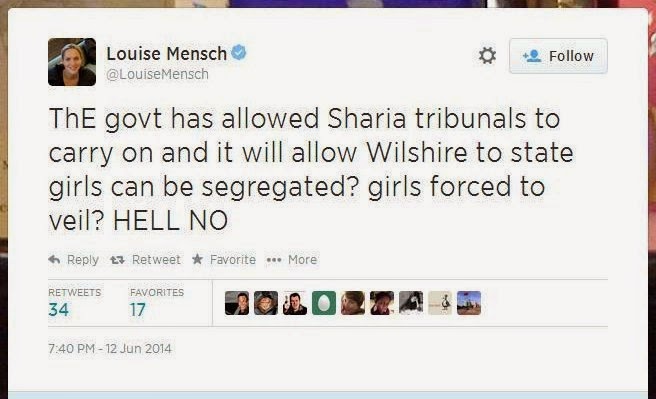 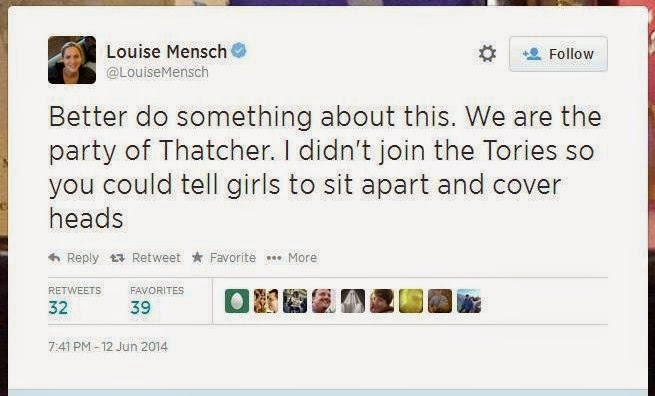 “And you, [Harriet Harman], if you do not say something today about this Ofsted guidance never call yourself a feminist EVER AGAIN”. That’s right, blame someone not in Government for Government actions. “Tweeters are asking me for the Ofsted guidance on segregating girls and forcing them to veil”. She still can’t tell a headscarf from a veil. And she’s about to make that three failures. 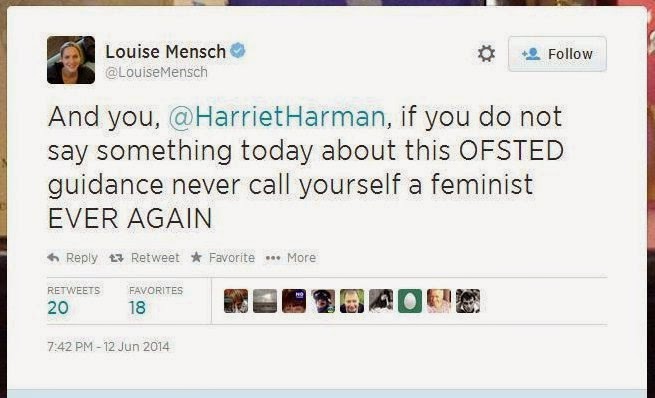 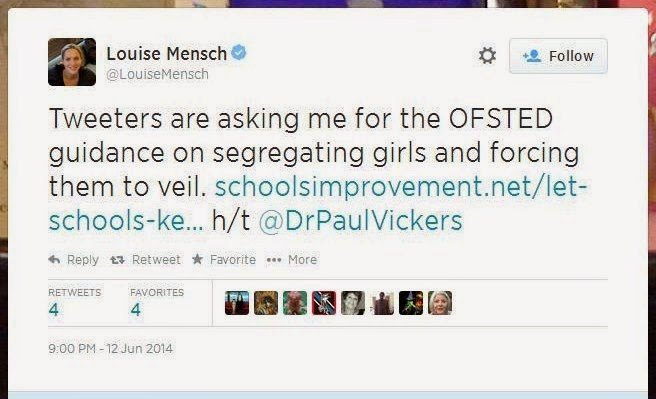 “Absolutely clear that Michael Wilshire must go. I don’t care how recently he was appointed. NOT OK to segregate girls, force veil them”. Plus a second invention of someone called Wilshire. And, in any case, it’s Ms Harman’s fault: “SERIOUSLY? Go through [Harriet Harman] feed, find a Tweet about music, NOTHING about segregation and forced veiling of girls”. And a fourth veil fail, too. 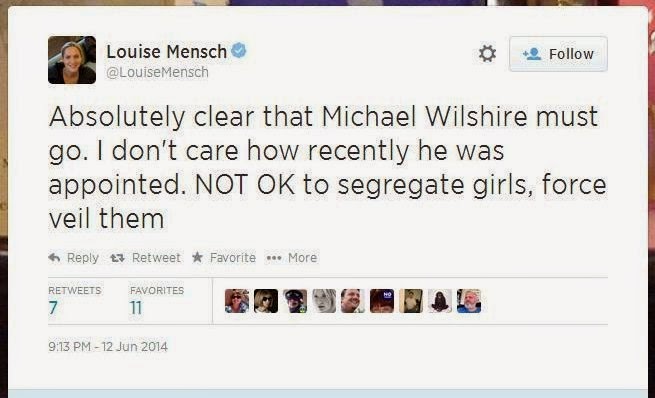 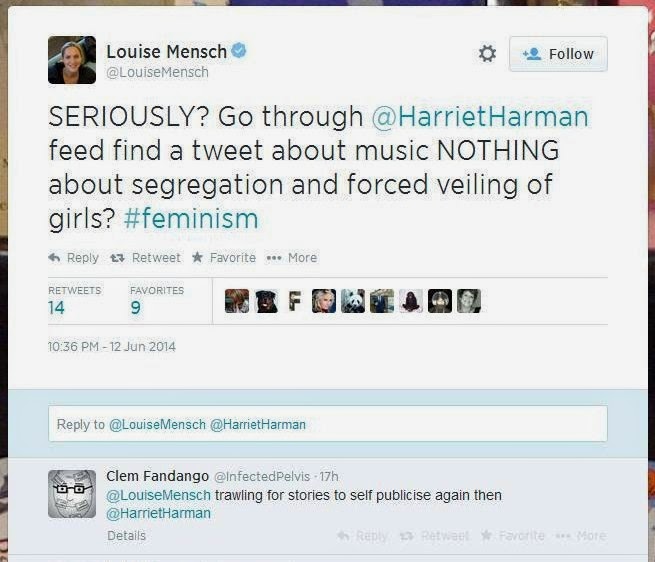 But it was definitely Ms Harman’s fault: “For God’s sake woman stand up and be counted, if you are a feminist, stand up for Muslim girls, for our girls [Harriet Harman]” she frothed, coming over all Hughie Green, following that with a truly bizarre false equivalence as she was challenged by Brian Moore over the minor inconvenience of Ms Harman not being in power. 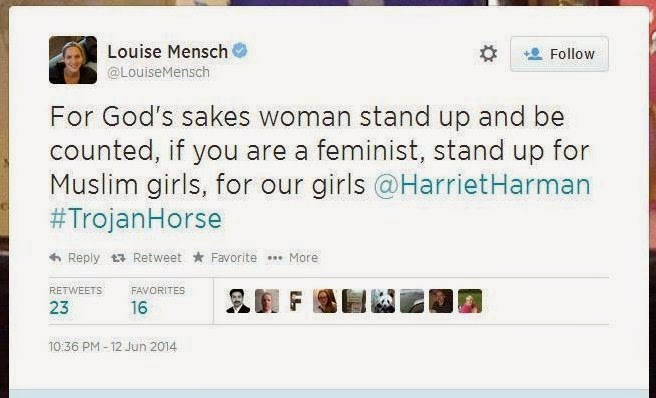 “For God’s sake this tri-party cowardice must stop, did Rosa Parks sacrifice so girls could sit back of class?” Yes, does nobody remember Magna Carta? Did she die in vain? Hold on a minute: what on earth has segregation in the Deep South got to do with a small number of faith schools, that have nothing to do with secular schools in Birmingham? Hello, Louise? Is anyone home this afternoon?

Even by the batshit standards of Louise Mensch, this is truly batshit. And wrong.
Posted by Tim Fenton at 17:32

The cunning of Odysseus seems to have evaded the Hector of the British from afar - maybe distance makes the voice appeasr hoarse. Has she shown her Achilles heel? She seems to have lost the magic of Circe with her one eyed non Cyclopaedic view of Britain.

Despite Bagshawes servitude, she has got a pretty face and and I can't escape the feeling that if she expressed her opinions on page 3 of her masters rag it would carry more weight.

A tit on show can have a lot of power.