Nadine Back In The Mirror

Well, that went well, or rather it didn’t: all the threats and bluster aimed at the Mirror and its staff by Mid Bedfordshire Tory MP (yes, it’s her again) Nadine Dorries have clearly had little effect, as the Daily version of the paper has once again gone after her over getting paid around £4,000 to appear on a “celebrity” version of ITV quiz show The Chase, which was intended to be for her chosen charity. 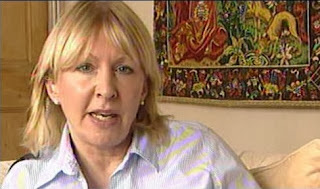 However, and this is a rather significant however, none of that fee went to the charity, although her winnings, around £1,000, may have (the Mail, which subsequently lifted the original story, claims that this sum was paid over). This may cause some eyebrows to be raised, as many viewers will have assumed that a charity appearance is exclusively that.

In other words, any appearance money would automatically go to charity, whether there were winnings involved or not. Ms Dorries has today been unrepentant: “Unlike Alan Johnson and Diane Abbott, I use outside earnings to subsidise [my] role as an MP and don’t claim personal expenses from [the] tax payer” she asserted on Twitter. And, as Jon Stewart may have said, two things here. 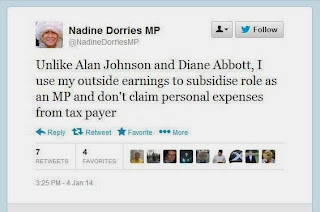 One, “personal expenses” does not extend to those working for her, including one family member, who are paid out of taxpayer funds. Those who followed the earlier Mirror stories may remember that one of her daughters is on the Dorries payroll, and lives rather a long way from Westminster. It was that story that brought the threat to nail reporter Ben Glaze’s undercarriage to the floor.

And there may no longer be any personal Dorries expense claims, but there certainly have been in the past; this has recently passed before the inspection of Unity at Ministry of Truth. The expense claims examined in detail at that blog were the result of an investigation by the Independent Parliamentary Standards Authority (IPSA), which this blog covered at the time.

Moreover, none of this explains away the unnecessary sniping at Johnson and Ms Abbott, merely because both of them represent the Labour Party (Ms Dorries has previous when it comes to slagging off Ms Abbott, which may not be unconnected to the latter’s stance on the pet Dorries issue of abortion). What she has done with the fee from The Chase simply does not look good.

That appears lost on Nadine Dorries. But then, the expense business was treated in a similar way: she was, in her own mind, doing nothing wrong. Well, if those passing comment at the Mirror and Mail websites are indicative of public opinion, that opinion is uniformly adverse. Perhaps this will be another example of initial resistance turning over time into grudging acceptance that she might have been wrong.

Come on Ms Dorries, give some of that fee away. Charity begins at home.

[UPDATE 5 Jannuary 1515 hours: Ben Glaze, the recipient of the threat of actual bodily harm from Nadine Dorries, has been in touch via Twitter to point out that there is another piece on the Tory MP in today's Sunday Mirror.

Glaze has reported that the fragrant Nadine has signed up with ASM Damage, a "talent agency" which includes on its books such luminaries as the Cheeky Girls. They have described her as "one of Westminster's most interesting characters".

The impression might be formed that Ms Dorries was preparing herself for a life outside politics, something which rather a lot of those eligible to vote in the Mid Bedfordshire constituency will wish had happened rather earlier]
Posted by Tim Fenton at 17:29

One of the advantages, for Dorries, of using a registered company for collecting extra-curricular appearance fees etc is that it gives her reaction time to deal with this sort of fall-out. Two months down the line she can, with apparent truthfulness, say all the money is going to charity—if there has been too much sniping.