Recently, a formerly independent school near Newcastle-upon-Tyne was blessed with the good fortune to have its £5 million debt paid off by the Government, as it became an academy and merged, against the opposition of the local council and many families, with a nearby primary school. And now it has lost its head teacher in controversial circumstances. 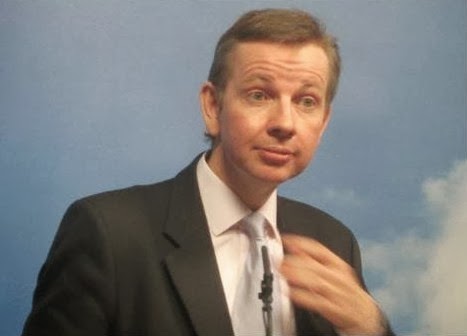 Yes "Oiky", what you're doing with our money

The King’s Priory School, the result of the merger of the King’s School and Priory primary, is in North Tyneside. Charging fees estimated at around £10,000 a year, the King’s School was in debt and suffering from declining pupil numbers. Other local secondary schools were more popular. So the merger and academy conversion were decided upon, and the debt was gone.

This apparently benign act by Michael “Oiky” Gove and his subordinates was cheered on by Sebastian Payne at the Spectator, who concluded triumphantly “The battle for The King’s School is over, and Labour has lost”  What Payne may not have done is to read what one of his commenters said about Emmanuel Schools Foundation (ESF): King’s Priory’s head teacher came from one of their schools.

ESF has been dogged by accusations of teaching creationism as fact. And it was not long before the heady mood of the opening celebration (attended and reported on by, you guessed it, Sebastian Payne of the Speccy) had given way to conflict: “teachers threatened strike action over their working conditions and there are said to have been frequent clashes with parents over [the] religious focus” it was reported.

Head David Dawes has now stepped down by “mutual agreement” – in the middle of the school year. Why this has happened is not difficult to see after examining the testimony of parents, such as “As a parent tears have been shed and there’s been such anxiety. There’s been no learning support staff for the entire term – that’s 80 children who were previously at King’s getting help with their reading and numeracy”.

Special needs assistance wasn’t the only complaint. Another parent said “[Dawes] wanted to make it highly religious. Christianity comes in lots of different formats and he was forgetting about the other children of faith and of those no denomination. It was creationalist [sic] and this wasn’t what I wanted for my child”. That matches the warning given in the comments on the first Spectator post.

Creationism being potentially taught as fact is one thing. An academy chain – once again – shedding head teachers mid-way through the school year is something else, and Woodard Academies, who run the King’s Priory School, have also lost the head of Littlehampton Academy in Sussex. And then there is the creative accounting that allowed King’s Priory to open debt free.


Thus another of the increasingly routine stories from the Gove education miracle.
Posted by Tim Fenton at 10:34

This was a very corrupt deal. A failing private school (in the face of competition from better private schools and the state sector) got bailed out and was given the management of a primary school simply because it is located about 50 yards away.