Just when it seemed every last unfortunate story about Michael “Oiky” Gove’s flagship Free Schools policy had been told, along came another tale of organisational shambles, overspending of taxpayers’ money, and brass neck to top all the others. I give you Parkfield Free School, in the south coast town of Bournemouth – but not in town for long. 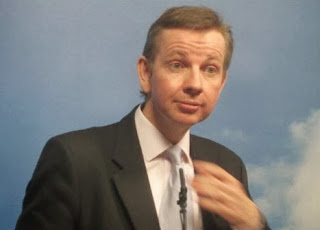 Parkfield was due to open for the 2012-3 school year. It did not. So then it was going to open for the 2013-4 school year. Premises were identified. These required some work doing to make them fit for purpose. The work ran over. So the building – an office block called Dorset House – could not be used. But the commitment to opening had been made. The organisers scouted round for an alternative.

And scouting is the right word: Parkfield had to open at Butcher’s Coppice, a scout camp. In the meantime, the bill for getting Dorset House up to scratch had tripled to around £1.1 million. Fortunately, “Oiky” and his pals willingly ponied up the dosh, an act that may cause eyebrows to be raised at local authorities around the country. So did everyone then live happily ever after?

Well, no they didn’t: despite the occasionally fawning copy awarded to Parkfield (ITV Meridian from October, with its “First look at Free School on seven floors”, takes the biscuit here), all was not well. Dorset House could only be used for two years at the most, and the school couldn’t find another suitable building in Bournemouth. But help was at hand – although not in the same town.

The training centre for the National Air Traffic Control Service (NATS) was vacant, and it had classrooms ready to move in to! But there was a teensy problem: it was at Bournemouth Airport, and this is a whole six miles out of town. Worse, it is not even in the same local authority area, being in Dorset. And, as a glance at the photos shows, the centre is adjacent to the airport’s apron.

So unless the classrooms have both double glazing and air conditioning, there is the potential for pupils to be subjected to the bracing smell of aviation fuel. And many parents are not happy about the enforced car journeys: there is little public transport provision. But the school’s spin has been almost heroic.

“The move out of the town centre will probably come as a shock to many families but I am sure that there will be many of you who will be extremely pleased and excited about the new site and the enormous opportunities it provides the school with”. Yeah, promising a school in the middle of Bournemouth and then upping sticks and settling miles away, in another local authority area, is something to get “pleased and excited” about. Nothing about the Gove revolution surprises after this.

How much more money will be sprayed up the wall before the plug gets pulled?
Posted by Tim Fenton at 10:45

One thing that seems to be overlooked in all this is that the school has quietly said that it will be changing its catchment area, too. Unlike many of the places Gove has opened his wallet, Bournemouth does have a severe shortage of school places. One local school is opening a fifth reception class next year - the largest such number outside of London. Parkfield was supposed to help ease that, but it's only going to make things worse, as Bournemouth Council were counting on it to take some of the numbers.

But of the biggest problems of the move is the transport infrastructure. There are two ways to get from Bournemouth to the airport. The main one is via the A338 Spur Road (the airport is just off a junction on this, the only route to the M27 and the rest of the UK). This is incredibly busy during the morning rush hour, with frequent jams. There is also the odd crash which causes long tailbacks. But this does not just affect the A338 - when an accident happens on it, vast swathes of Bournemouth itself comes to a standstill because there is no viable alternative. The other route to the airport is via the more rural country lane route. But to get to this, one has to drive from the A338 roundabout to the A347 along Castle Lane. Castle Lane is known not only for its traffic jams, but also its bad design - one lane splits to two, then back to one, then two, and so on, along much of its length. This causes more tailbacks and accidents.

Put quite simply - Bournemouth's road infrastructure is not designed to cope with anything other than normal traffic. I remember last year, an accident on the A338, and several others as a result of motorists looking for other ways, send the town to a standstill. Driving from Bournemouth to Ringwood (about twice the distance of the airport) took some people over 2 hours.