The ever-observant Moron Watch had an interesting question to pitch yesterday afternoon. “If trolls are being put on trial, why is @KTHopkins still walking free?” was clearly taxing at least one person, and with good reason: professional motormouth Katie Hopkins may have been temporarily banished from the ITV This Morning sofa, but she is clearly still out there ranting. 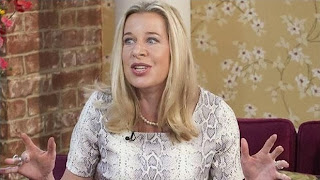 This is assisted not just by Twitter, but also a regular column in the Murdoch Sun, and recently an appearance on the BBC’s This Week, just to show how appallingly left-wing the Beeb has become. Here she could make Michael Portillo look like a namby-pamby socialist. But back to the question in hand: is Ms Hopkins really a troll, or is she imparting genuine knowledge to us all? 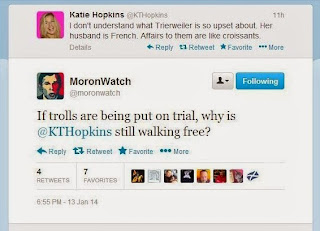 And the answer has to be that, whatever she is doing, there is precious little imparting of knowledge being done. Take the Tweet with which Moron Watch took issue: “I don’t understand what Trierweiler is so upset about. Her husband is French”. As any fule kno, Valerie Trierweiler and François Hollande are not married. Katie fails the elementary task of engaging brain before mouth. 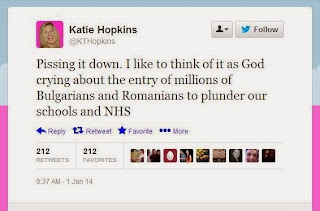 So it was with migration: “Pissing it down. I like to think of it as God crying about the entry of millions of Bulgarians and Romanians to plunder our schools and NHS”. The Romanian ambassador, who might be a teensy bit more knowledgeable than Katie, says around two dozen have arrived from his country in the first fortnight of the year. That would be more trolling, then. 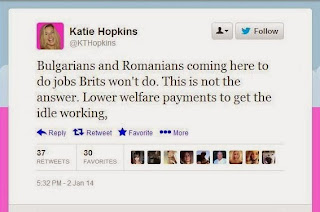 Still, if you don’t succeed, try, try again, eh? So Ms Hopkins tried a different tack with migration: “Bulgarians and Romanians coming here to do jobs Brits won’t do. This is not the answer. Lower welfare payments to get the idle working”. And, as Jon Stewart might have said, two things here. One, see previous paragraph. And two, let’s see Ms Motormouth living on Jobseeker’s allowance for a week (fat chance). 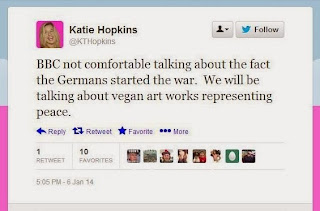 Never mind, Katie can still wade into the Great War debate: “BBC not comfortable about the fact the Germans started the war. We will be talking about vegan art works representing peace”. The BBC, not having an opinion, cannot be “not comfortable” about something that in any case is not a “fact”, even if a Twitter troll wants to ask everyone to “look over there” at her prejudice against vegans. 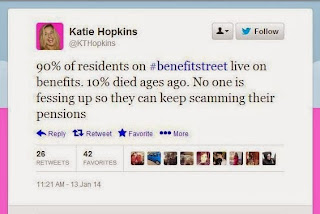 And in case anyone thought she wasn’t deliberately trolling, here came the pièce de résistance: “90% of residents on #benefitstreet [sic] live on benefits. 10% died ages ago. No one is fessing up so they can keep scamming their pensions”. That’s the definitive “look at me” troll in one: malicious, untrue, irrelevant, and only pitched in to the debate to get its author some attention.

Moron Watch was right: Katie Hopkins is so bad, it’s criminal. Take her down!
Posted by Tim Fenton at 10:53

It puzzles me that Katie Hopkins is always referred to as a 'business woman'. What does her business consist of? How many people does she employ? In what sense does she run a business in a way that I would recognise as such?

There is a 'Katie Hopkins Ltd' which is apparently £11,000 in the red, what is its business? Marketing Katie Hopkins as a speaker?

My son (aged 20) has recently found some of Ms Hopkins' quotes online and was incensed by them all. He could not believe how outrageous she is.

Her wikipedia page, more accurate than most of the media, describes her as "[a] former British reality television contestant, currently acting as a national newspaper columnist and social commentator"

"Not fessing up...."? Pots and kettles spring to mind. What about her not fessing up to a medical condition that would have barred her from joining the army because of the dangers? Instead she wasted tax payers money at Sandhurst until the truth came out and she was forced to leave. And I'm sure her Wiki page has been altered quite a bit recently with comments about Sandhurst and Uni going missing.