The thought that the regime of the legendarily foul mouthed Paul Dacre might not be forever at the Daily Mail appears to have had a briefly galvanising effect on the paper’s unfunny and tedious churnalist Richard Littlejohn, who has today rummaged through his back catalogue of remaindered and unwanted books to tell his readers that the country is once more “going to hell in a handcart”. 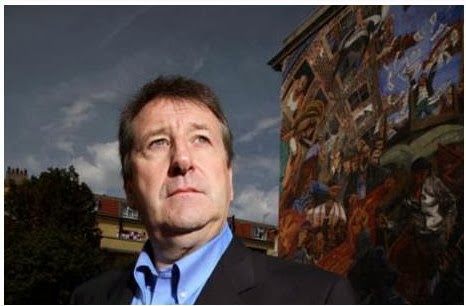 This may surprise those for whom this morning looks very much like yesterday morning, but Dicky Windbag is a man with a mission, and that mission is to scream his message so loud and so often that someone makes the mistake of believing it. He has the advantage that his targets are public servants, and he has the backing of the so-called Taxpayers’ Alliance (TPA) as well as the Mail’s own slanted copy.

Yes, for those of us wondering what the TPA has been up to of late, they have been going after councils over their issuing of blue badges, and their approach to drunkenness, instead of saying boo about all the millions their pals out there on the right are spraying up the wall on things like unwanted Free Schools, the continuing shambles that is Universal Credit, and Bozza’s vanity projects.

Littlejohn’s first target is Walsall council, because some of those blue badges have been given to people who are less mobile because they are obese. “Some of them belong in mental hospitals” he claims, from a knowledge base of diddly squat. “most of those categorised as ‘obese’ are not genuinely disabled ... They are just fat and greedy and won’t stop stuffing their faces” he drones on.

And they’re all going to do it: “You can bet ... where Walsall leads, other councils will follow in the name of ‘compassion’ and being ‘non-judgmental’. They’ll be handing out blue badges by the tens of thousands to anyone who can prove they have ‘mobility issues’”. Really? “All assessments are undertaken by an independent mobility assessor in line with Government legislation on 1 April 2012”. So not really.

What’s his other compelling reason for that descent into hell? York council is looking at alternatives to convicting those who persistently get themselves tanked up and cause a nuisance to others. “anyone arrested five times for being falling-down drunk and disorderly will not be thrown in the slammer, they will be sent on a course to reflect on their ‘behaviour and self-image issues’” says Dick. And he’s not happy.

“Don’t you just hate that word ‘issues’, a weasely catch-all expression to excuse anyone who is unable to control their own base impulses”. Yeah, right. And the reality? “This is about finding the most effective way of tackling the issue and saving money in the long run - those sent on courses will have to bear the cost themselves”. So it’s a practical and pragmatic response to a known problem.

Dick, you’re a dick. Stay in Vero Beach and leave the UK to the grownups.
Posted by Tim Fenton at 13:11

Are you suggesting that Littlecock lives in a gated community in Vero Beach, Florida, rather than on the mean streets of the UK. That can't be true, because if you try to put it in a comment on the DM site, it gets censored as untrue. And we know the DM's commitment to truth. And justice. And equality. And racial harmony.

I don't want the UK run by leftish twats such as yourself, thanks very much. The "grown ups" don't spend their time blogging about newspaper articles, the grown ups do something useful for the country and its people.

Once again, a columnist appearing to suggest that "belonging in a mental hospital" is somehow different from needing medical help and support.

Also, as far as the post by "Anonymous" above is concerned, I think Britain might be quite nice if run by "leftish twats" such as Tim Fenton. Certainly, there'd be more trains :)

And what pray does Littlejohn do for this country and its people?

Always presuming you regard him as a "grown up"?

A "leftish twat" that resides in this sceptred isle surely has as much right to express an opinion, or even run the country, than Littlejohn and Mensch for example, who have, for whatever reason, upped sticks and departed?

Or is free speech only for the "rightish twats"?

The "grown ups" don't spend their time blogging about newspaper articles, the grown ups do something useful for the country and its people

It is, of course, quite impossible to do both. I started blogging nearly ten years ago, and the usefulness of Richard Littlejohn is still a rather distant aspiration for me.