You know that the Christmas and New Year break is well and truly forgotten when the BBC’s hardy perennial Question Time returns to the screen, and Thursday evening saw the programme at Goldsmith’s College in south-east London. This provided yet more extra-Parliamentary work for Mid Bedfordshire Tory MP (yes, it’s her again) Nadine Dorries, and one interesting debutante. 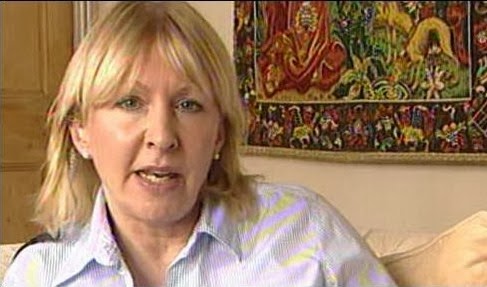 That was one Susie Boniface, aka Fleet Street Fox of the Daily Mirror, who has sinned twice over in the eyes of the fragrant Nadine, having found work at a paper that regularly gives Ms Dorries a hard time, and also having given her some stick not only on Twitter, but also in her column. As a result, the two did not speak before, during, or after the recording.

Now, as many Zelo Street regulars will know, there are some journalists whom I hold in high regard, and some who I consider to be an absolute shower (on Ms Boniface I don’t hold any particularly strong opinion). But were I to encounter one in the latter category, knowing they would be writing about it afterwards, I’d make the effort to extend the basic courtesies to them.

Not Nadine. And Ms Boniface did indeed write about it afterwards (a rattling good read it is too), telling that fellow panellists Norman Baker, Chuka Umunna, and even UKIP’s Paul Nuttall, were civil, pleasant and welcoming to her. So was the good and great Dimbleby Major himself. Ms Dorries was pig ignorant from start to finish. And then she started slagging off Ms Boniface for the sheer hell of it. 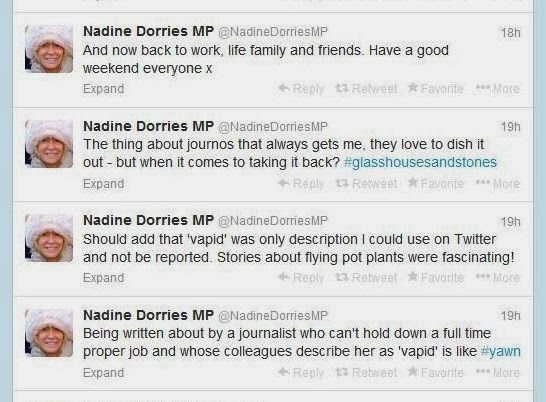 “Being written about by a journalist who can’t hold down a full time proper job and whose colleagues describe her as ‘vapid’ is like yawn ... the thing about journos that always gets me, they love to dish it out – but when it comes to taking it back?” she ranted. So MsBoniface is a freelance? Big deal. She shows in her article that she has no problem taking stick from others. 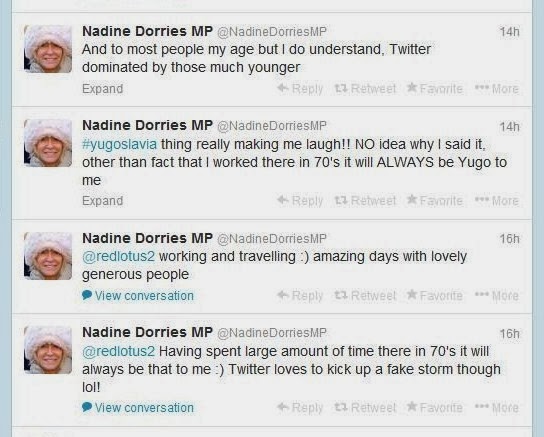 So when the fragrant Nadine slipped up during the recording, and answered a question on EU migration with “There has been no tidal wave but there might be tomorrow, there might be next year – we don’t know – and that is the problem. We could have a tidal wave from Yugoslavia”, there was ridicule, hilarity, and precious little sympathy. Because she, as usual, hadn’t done anything wrong.

“Twitter loves to kick up a fake storm ... I worked there in the 70s and it will always be [Yugoslavia] to me ... and to most people my age”. Not to this person her age it won’t. What’s her problem? Why not just admit the howler and that sometimes stuff happens? Why be so personally abusive before a word has even been written by the target? Anyone would think that Nadine Dorries has a problem.

They might also conclude that she is not a very nice person. No change there, then.
Posted by Tim Fenton at 11:24

Jethro Tull (stand up Ian Anderson!) had the best comment re Dorries and Gove. They're "Living in the past".

it wasn't so much her calling the country Yugoslavia, but the fact that only a very small proportion of the residents of the former country are now in the EU.

I was working in Italy when there was civil war in Yugoslavia - you could see the smoke rising over the ocean, very exciting.