Express Beast From The East Fraud

As the weather quietens down a little after the recent storms, the temperature inevitably falls – because that’s what happens in the middle of winter, folks, and that is where the UK is right now. This is not unusual. No-one need be alarmed. But for the irrepressible Nathan Rao over at the increasingly trashy Daily Express, this is an ideal opportunity to frighten the readers. 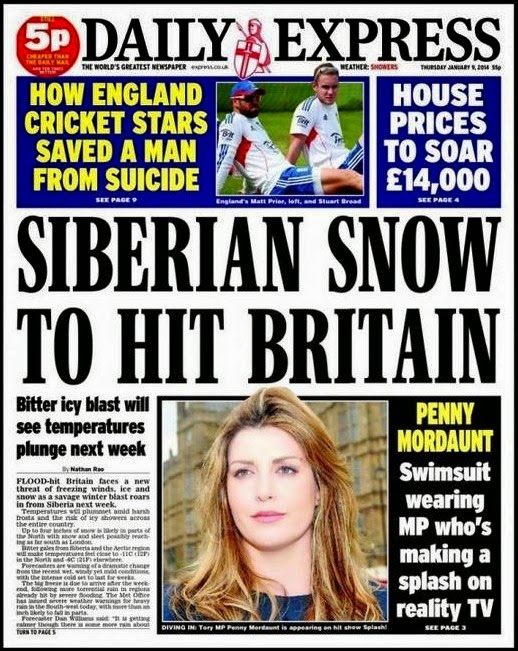 And so it came to pass, as today’s headline read “Siberian Snow To Hit Britain”, which would be an interesting sight, as the two are thousands of miles apart. Nevertheless, readers were also told that “Bitter icy blast will see temperatures plunge next week”. This sounds a racing certainty, rather than an outside possibility. So where is he getting his forecast this time?

Ah, but you know that already: “Jonathan Powell, forecaster for Vantage Weather Services, said freezing air from Siberia and North-eastern Europe is due to flood in after the weekend”. Anyone else? “James Madden, forecaster for Exacta Weather, said rain over the weekend is likely to turn to snow with the North braced for a ‘significant’ deluge”. And, as the man said, there’s more.

“He warned the extreme cold and snow threatens to hold out into next month with much of the country in for weeks of winter misery”. Now, I hate to rain (or even snow) on Nathan’s parade, but it is now well known that Vantage Weather Services and Exacta Weather are quacks, and have been shown to be so. So what do the real weather forecasters have to say?

Here’s the Met Office verdict for January 14 to 23: “Through the week it may become cold in the northeast, with strong easterly winds and wintry showers. Western and southwestern parts are probably going to be less cold and cloudier with further rain. Later in the month it is likely to become less cold and more changeable”. And the period from January 24 into February?

“Outbreaks of rain mainly affecting northwestern parts of the UK, spreading further southeast at times but tending to weaken. The best of the dry and brighter weather should remain in the southeast. Some periods of colder weather are likely, particularly in between weather systems, but overall temperatures may well remain near normal”. That was issued at 0400 hours today.

On top of that, the Atlantic Jet Stream forecast (see the Metcheck version HERE) shows no significant high level winds coming to the UK from points east for the next fortnight. So on the basis of that, it has to be concluded that Nathan Rao is deliberately attempting to frighten his readers with another largely fraudulent story. It’s a truly desperate way to sell newspapers. But it’s cheap.

And that means only one thing – it’s another Benchmark Of Excellence!
Posted by Tim Fenton at 12:49

They are pandering to their demographic who are predominantly the wrong side of 60. Stand in a Post Office or in the doctor's waiting room and the conversations revolve around the weather, immigrants, health problems that beset the aged and pensions. New Labour also used to figure in the list but not so much now.

Indeed. It's best to pass all Express 'stories' through what I call the 'Mrs Brady filter', by reading a headline aloud, preceding it with an 'Ooooh...', and imagining a similarly bewildered person going 'Yes...immigrants...'.

They're lucky the old Anti-Terrorism Act was changed. I seem to remember it covered any act intended to cause mass alarm amongst the public......


But they missed a chance here, gales from the east might blow some Bulgarians across!