The Coalition has finally, after some months’ prevarication, come down jolly firmly on the side of those lobbying for shale gas exploration, as Young Dave told anyone who was listening that “Shale is important for our country” and that anyone interested needed to “get on board”. There then followed a number of, er, incentives designed to cause local authorities to do just that. 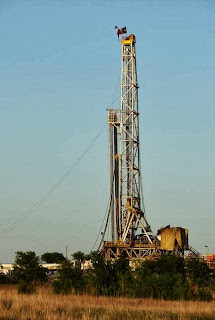 Not coming to Zelo Street any time soon, folks

As the Beeb observed, “English local authorities would receive all the business rates collected from shale gas schemes - rather than the usual 50%”. And “the shale gas industry has promised communities £100,000 for test drilling at potential sites and a further 1% of the revenues if deposits are discovered” as the Chronicle here in Crewe reported. Not that we’ll be seeing any of the action (see further down).

What of the usual environmental suspects? Greenpeace accused the Government of “bribing councils”, many of whom are seeing central Government grants cut year-on-year. Friends of the Earth put it slightly differently, calling the policy a “community sweetener”. And not every player in the energy sector is jumping on board the newly incentivised bandwagon – BP and Royal Dutch Shell, for instance.

As the Telegraph notes, Simon Henry, Shell CFO, told that his company had “much higher priorities, and more attractive opportunities” elsewhere and would not be proceeding merely “because the UK feels it’s a good thing”. BP’s spokesman said that its decision was “for good geological and commercial reasons ... We continue to monitor competitor results with interest, but so far we have no regrets”.

But what about all those stories of gas prices falling in the USA, to the benefit of consumers? This must be A Very Good Thing, yes? Er, no: the energy companies are not necessarily going to find it in their interests to make very little because of price falls and consequently low margins. The interests of themselves and their shareholders do not necessarily align with one country’s national interests.

And Lord Browne, former BP CEO now heading original UK fracking explorer Cuadrilla, has put the kibosh on claims of cheaper bills, having gone on record to say “unless it is a gigantic amount of gas, it is not going to have material impact on price”. So when George Osborne said “This a real chance to get cheaper energy for Britain … a major new energy source that can reduce energy bills”, it was crap.

Worse, the local authority covering most of the Chancellor’s constituency, Cheshire East, has already banned fracking. Maverick council leader Michael Jones, a Tory like Osborne, has said “Fracking may well be a useful technology for other areas and good luck to them if it is, however the people of Cheshire East have our assurance that there won’t be any in our borough”.

So that’s one big raspberry all round for the frackers. No surprise there, then.
Posted by Tim Fenton at 17:31

I seem to remember iDave saying local people would decide whether it would be allowed, I sort of assumed he meant all local people, ie some form of consulation or referendum. But it appears he meant 1 or 2 people who are local, in our case Kim-Il Jones, who happens to be local (just..) and the size of two people!

and as an update, 24 hours after giving his pledge Jones was forced to admit to the BBC he doesn't have the power to block it the way he promised.