What caused the persistent flooding of the Somerset Levels? For one resident of the county, there was only one answer: “The Environment Agency's failure to dredge clogged-up rivers is causing floods” told Christopher Booker in his Telegraph column on January 11. Getting this message across was an even higher priority than kicking those “rabid warmists at the Met Office”. 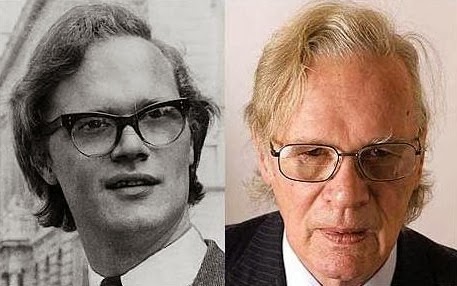 As confidently wrong as he ever was

And he had advice for Young Dave: “Instead of revealing that he has no idea what he is talking about, Mr Cameron might concentrate on the real causes of the genuine problem highlighted by the recent flooding ... a central part of this problem lies in the refusal of the ... Environment Agency ... to dredge the main rivers, which are so clogged up that they can no longer carry away the run-off from flooding”.

This was the central thrust of his argument, which was restated two weeks later: “Catastrophic Somerset floods are the result of the Environment Agency's policy against dredging its rivers”. Booker was then given a platform by the legendarily foul mouthed Paul Dacre to tell “It's the deluded greens who've left my Somerset neighbours 10ft under water”. As Sir Sean nearly said, I think we got the point.

The head of steam built up behind this assertion was believed by the two Lib Dem MPs from the area who quizzed Cameron at PMQs yesterday. The PM then declared dredging to be a jolly good solution, and committed to it. Fortunately, Booker’s nemesis George Monbiot of the deeply subversive Guardian has applied a little common sense to the problem, and effectively concluded Booker is wrong.

On the question of dredging, he tells “David Cameron pledges to pursue a policy in the Somerset Levels that will only lead to more dangerous rivers. But it keeps the farmers happy”. Dangerous? You betcha, says Sarah: “Removing river bank vegetation such as trees and shrubs decreases bank stability and increases erosion and siltation”. And the dredging has to be repeated after every flood.

It gets worse: “If the river channels are dredged and structures are not realigned, 'Pinch Points' at structures would occur. This would increase the risk of flooding at the structure ... Removing gravel from river beds by dredging leads to the loss of spawning grounds for fish, and can cause loss of some species. Removing river bank soils disturbs the habitat of river bank fauna such as otters and water voles”.

On top of all that, as Monboit points out, dredging a river “might raise its capacity from, say, 2% of the water moving through the catchment to 4%. You will have solved nothing while creating a host of new problems”. Many positive measures can be taken to ameliorate the effects of flooding. But dredging is not one of them: it may make people feel better. But it won’t stop floods returning.

Christopher Booker is a complete charlatan, a false prophet. No change there, then.
Posted by Tim Fenton at 17:24

"You betcha, says Sarah" ?? looks like a copy and paste error from the Sarah Vine piece. Not as funny as tick boxing though.

"You betcha" is a reference to a Sarah *Palin*-ism.

No one with experience of the levels expects that floods will be prevented entirely.
Increasing the capacity of the rivers to 4% would have cleared the floods by now 21|*4 = 84%).
There is nothing downstream which would benefit from holding the waterd back on the flood plain.
Most of the catchment area is flat and the planting of trees in the uplands does not apply. The new excuses by the agency weren't the ones they were giving two weeks ago, when they said that dredging wasn't a priority in their constrained budget. ei nothing about dangerous river banks. in any case we're only talking about resuming what was done for centuries before the EA took over responsibility. So any problems for wildlife happened a long time ago. Most of the The solutions advocated would reault in most of the levels being inundated again as they were before the middle ages. They are not a ntural landscape to begin with. You might as well tell the Dutch to plant more trees
Mr Monbiot has jumped on a bandwagon heading in the wrong direction in this case. The arguments are usually correct, but it's horses for courses.
Cameron has taken a populist line, Paterson has been wrong footed, and the agency has been instructed to come up with a line that suits Paterson, but too late, but too late to keep up with Cameron.