We are constantly being told that people need more conviction politicians, those who don’t slavishly toe the party line, who are prepared to make their own choices and trust their own judgments. But when politicians stand on their convictions - as with the Commons rebellion recently on having a final say on the so-called “Brexit Bill” - all they receive in return is a tsunami of abuse. So it has been with Andrew Adonis. 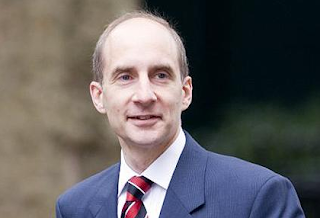 Adonis had been a member of Gordon Brown’s cabinet as Transport minister. His CV includes academy schools, railway electrification programmes, and the HS2 project (the last mentioned being subject to derision from across the political spectrum, usually by those who can’t bother to do their research, or who would rather others didn’t). And he has recently chaired the National Infrastructure Commission.

When he resigned recently from the NIC chair, he laid out his reasons for so doing. On some of them, this blog would disagree - the East Coast non-bailout being the obvious candidate. But on Brexit and its dangers to the UK economy he is spot on. And in any case, he is free to make those choices and speak to them. 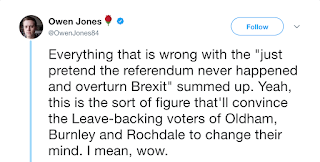 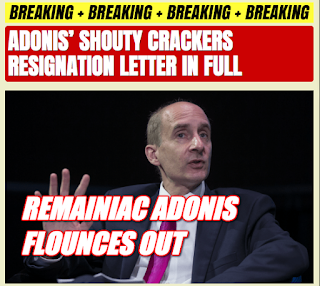 Not all approved of his freedom to speak freely: the Mail called Adonis’ resignation letter “an extraordinary rant at Theresa May” and told readers “Brexiteers told MailOnline Lord Adonis was 'condescending' and had refused to accept the result of the referendum … A Government source made clear Lord Adonis was going before he was pushed”. Political pygmies Michael Fabricant, Jacob Rees Mogg, Andrew Bridgen (always on speed dial) and Iain Duncan Cough passed suitably adverse comment. 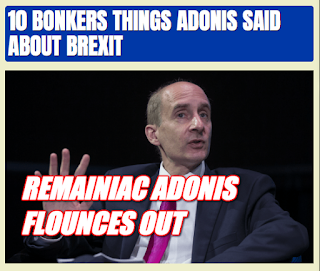 That many in and around politics have instead sought to denigrate Adonis’ choice, and his reasons for making it, shows exactly what they really think of conviction politicians. It shows an inability to come to terms with dissenting views and inconvenient thought, a real dislike of free speech, and a fear of those prepared to think clearly and then put their thoughts into words. The roll of shame is not a pretty sight. 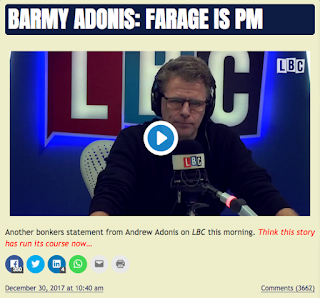 The assembled silliness included failed hack and freeloading Kipper Patrick “Lunchtime” O’Flynn sneering “So Andrew Adonis decided to resign while on a skiing holiday in Austria. Possibly the most Remainery thing ever”. At the opposite end of the political spectrum, Owen Jones also disapproved of Adonis visiting Austria over Christmas: “Everything that is wrong with the ‘just pretend the referendum never happened and overturn Brexit’ summed up. Yeah, this is the sort of figure that'll convince the Leave-backing voters of Oldham, Burnley and Rochdale to change their mind. I mean, wow”. 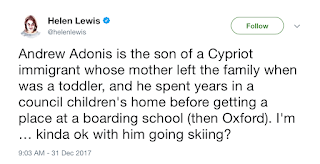 While Jones considers the imperative of Healey’s Dictum, the perpetually thirsty Paul Staines and his rabble at the Guido Fawkes blog have opted for mental health smears, one of their favourite weapons. So Adonis is called a “Remaniac”, and readers are told of “Adonis’ Shouty Crackers Resignation Letter In Full”, “10 Bonkers Things Adonis Said About Brexit”, plus the totally untrue “Barmy Adonis: Farage Is PM”.

It was left to others to put the counter argument, notably Helen Lewis from the Staggers who told “Andrew Adonis is the son of a Cypriot immigrant whose mother left the family when was a toddler, and he spent years in a council children's home before getting a place at a boarding school (then Oxford). I'm … kinda ok with him going skiing?”

TUC National Organiser Carl Roper added “Confession time. I went to a Liverpool Comprehensive school in the early 80s and guess what? We went skiing on a school trip. #classtraitors”, and Michael Skapinker of the FT stressed “I worked with @Andrew_Adonis for 7 years. Utterly principled, ferociously intelligent, with an up-from-nothing life story most Labour hacks would kill for but which he wears lightly. We’re lucky to have him”.

With his considerable abilities, Andrew Adonis had no need to subject himself to the bear pit that is mainstream UK politics. That he did so will most likely benefit the country overall. Plus he has demonstrated that he is a conviction politician. Yet that quality supposedly admired by our free and fair press, and their hangers-on, is swiftly denigrated to the point of sneering and gratuitous abuse as soon as it does not accord with their agenda.

We are constantly being told that it is others who hate and abuse freedom of speech. It is not. Our Press and Pundit establishment has demonstrated in its crude and bellicose response to Andrew Adonis’ principled stand that it is no more tolerant of dissent than the Soviet Politburo of the past, or the clerics of Tehran in the present.

Some people cannot be easily pigeonholed. Others, in the tradition of John Maynard Keynes, change their minds when the facts change. Their views may be inconvenient to some of us. Well, that’s just the way it is. So get over it.
Posted by Tim Fenton at 16:18

Thanks again for your hard work and insight during 2017. Best wishes for 2018.

Brexiters sure are scared of Remainers, aren't they?

Let me echo Bob & thank you for your work.

Wishing you a Happy New Year!

Bit rich that, Tim, you accusing others of "sneering".

Not that I mind, you understand. Usually the ones you sneer at thoroughly deserve it. They are, by and large, a gang of far right cunts who should be cutting sandwiches for the money launderers in Canary Wharf, Westminster ans Whitehall.

So do carry on. It'll have the East End pearly queens and kings shedding sequins. Which is also OK by me.

Strangely Adonis has been all over the place on everything but Brexit lately. Have been commending your post on the VTEC "bailout" to all and sundry. Somebody called you "right wing fake news"!