Once again, the adage that a little knowledge can be dangerous has been proved true in spades, and once again it is the rail industry that does the proving. After it was announced that the Virgin Trains East Coast (VTEC) franchise would end three years early, in 2020, the oh-so-knowing abuse began: the public sector would have done better, it should be nationalised without compensation, and it was all Richard Branson’s fault. 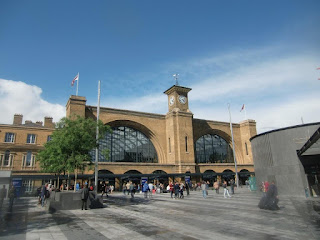 Andy McDonald, shadow transport secretary, told “I've written to the Transport Secretary Chris Grayling demanding that he comes clean about the bailout of Stagecoach/Virgin on the East Coast rail franchise and the cost to the public purse”. Andrew Adonis, another who thinks in stark monochrome on such matters, waded in with “Chris Grayling’s Stagecoach/Virgin bailout will come under intense scrutiny from State auditors. Rightly so - billions of taxpayers’ money & rail investment at stake!” The real amateurs were worse.

“Grayling has been accused of overseeing a ‘great train robbery’ amid claims that taxpayers will be left with a £2bn bill from a botched rail re-privatisation … Stop @Virgin_TrainsEC  getting a £2billion bailout from taxpayers because they've messed up  running our East Coast Mainline. Sign + share our petition with @We_OwnIt to bring it back into public ownership now!” And it got worse still. 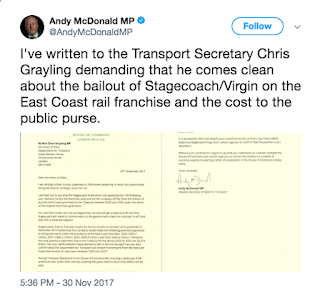 “Virgin raid the public purse yet a-bloody-gain. Branson is an arch-chiseller. So he wears jumpers, affects bohemian airs |& “informality"? So fucking what? He's still a rapacious racketeer. East Coast rail bailout will cost taxpayers hundreds of millions … Stagecoach (and Virgin) took over … Company to benefit from an effective £2 billion bailout while potentially being lavished with a new contract on preferential terms post 2020”.

Quite apart from VTEC being a 90% Stagecoach-owned venture (Virgin Group’s stake is just 10%), as Roger Ford of Modern Railways magazine, who has rather more than a little knowledge of the rail industry has pointed out, rather a lot of nonsense is being spouted about the situation, and his analysis should put the critics straight. 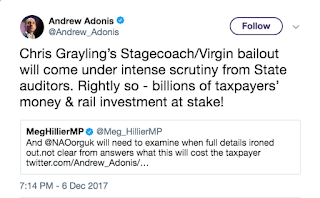 “Readers will know that the situation is not as simple as the Branson-Bashers, Bring back British Rail proponents and left wing politicians like Lord Adonis would like to believe … As Stagecoach pointed out when it broke the bad news to its shareholders, ‘the scope and timing’ of the delivery of the new rolling stock under the government’s Intercity Express Programme and Government-owned Network Rail’s ‘reprioritised’ infrastructure upgrade programme for the East Coast Main Line were ‘not consistent with what was assumed in our franchise bid and then contracted’”. Meaning what, exactly? 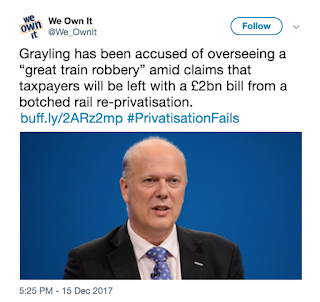 Meaning that “So even had things been going swimmingly, VTEC would have run into a brick wall in May 2019 when the upgraded [East Coast Main Line] on which to run the more frequent and faster trains, including an hourly 4 hour London-Edinburgh service, was not available.  Without the services to attract more traffic and generate more fares income to pay  the rising premiums, the franchise would have had to have been renegotiated from April 2019 anyway”. This meant bad news for the Branson bashers. 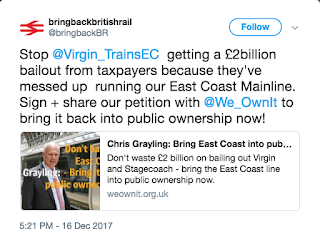 “Since DfT is responsible for both the IEP contract and nationalised Network Rail, Government was on the hook as much as, if not more than, Stagecoach … So talk of a government bail-out letting VTEC off paying growing  premiums in the last three years of the franchise is mere political cant”. And the claims of being “bailed out”?

“Far from ‘handing in the keys’, Stagecoach is playing a long game and staying in play at a cost of £84.1 million over the next two years (2017-18 and 2018-19), in addition to drawing down £57 million from the Parent Company support loan commitment in the franchise agreement”. Funny kind of “being bailed out” that is. 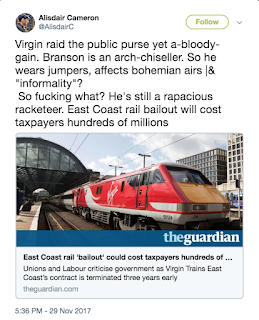 Moreover, there is no guarantee who will operate ICEC after 2020: it might not be VTEC, although, as Roger points out, “Even assuming that … VTEC 2.0 comes into effect on 1 April 2018, it is then going to take at least two, probably three, years to sort out/rescue the Intercity East Coast timetable, especially power supply and rolling stock issues”.

He also relates a recent discussion with Labour’s Andy McDonald, concluding ruefully “We had [a] good chat, but I could not interest him in the fact that the VTEC franchise was shot from May 2019 because of the non-availability of the infrastructure upgrades needed. As with Andrew Adonis, for politicians issues have to be black and white, or rather red and blue, and nuance only weakens the message to the faithful”. 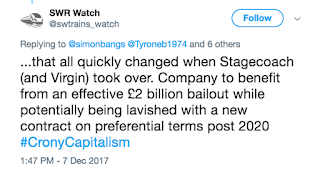 Quite. But the highly speculative and misleading suggestion that somehow Virgin and Stagecoach are going to be handed any fantasy sum of money up to £2 billion for doing something wrong is just so much guff. But politicians, campaigners, and far too many in the enthusiast fraternity are unable, or unwilling, to do the detail.

Once again, the righteous hot air bears all too little relation to both the reality, and the complexity, of the issue. It could serve all concerned to get knowledgeable before sounding off in future. Not that any of them are likely to do so.
Posted by Tim Fenton at 16:29

If virgin own just 10%. Why is their name plastered all over the rolling stock?
Answers on a postcard please.

Abusive comments from those who have not read the post will not be passed.

The Virgin Trains (who operate the West Coast) have always been 49% Stagecoach (the company is legally seperate from the East Coast mob). Branson may still pull some strings on the west coast but is little more than a spectator on the east coast, Brian Souter is the villain there. In the bid for the new WCML/HS2 hybrid franchise part of the Virgin share has been taken by SNCF - interesting that one of the most right wing free marketeers in britain (souter) and Britains best known entrepeneur have teamed up with the most anti-competitive state owned rail operators in Europe - funny how some people's principles disappear at the mention of profit opportunities..

The failure of the DfT/Railtrack to deliver previously contracted track specifications leading to a train operator being left stuck and liable to receive compensation is not new. In 2000 Virgin Trains (West Coast) had a deal to run 140mph trains, which they aquired as per the contract. Unfortunately the 140mph railway has not and never will be available for them and they received quite a lot of money for their inconvenience - from a Labour government.

I've got a bit of sympathy for Labour's overall position- privatisation doesn't always work well, and no-one has ever assessed the balance of benefits and disadvantages. However, statements like this don't help (the same goes for Corbyn's comments on crowding on the same route last year). I don't always like Roger Ford's approach (I'm in the industry, and he can be as guilty of leaping to conclusions and grinding axes as others), but he seems to be pretty insightful here. I'm assuming you get the Informed Sources e-preview as well!

The arguements will continue, nationalise!! privatise!!! We are politicians and there must be a political angle on everything!!!

And no-one asks whether Sir Humphrey of the DfT and the rest of his staff are worth paying in brass washers. No-one asks how the senior management at the train operators got their jobs, and was it based on dodgy handshakes. And definately no-one looks back over the years to see whether we've been through this before.

And eventually a minister will try a new political policy. And bugger all difference will be made.......

Are you suggesting the Virgin share is more than 10%?

Companies haved to borrow and the divideneds (profits to the unknowing) are servicng the debt. If nationalised, bonds are issued instead of shares and interest payments service the debt. It is cheaper to issue shares than bonds but state owned industries cannot do this. Also, to keep interest rates reasonable, the Treasury often blocked good invesmtment plans or underfunded that, BR never had enough trains. Private companies are run by industry experts and if they get it wrong enough they get sacked. Stae companies are run by civil servants and local goverment officers who are virtually unsackable if they screw up. Private companies try different things but state companies will be ultra-cautious and back covering is more important than attracting customers. Private companies are dependent on attracting customers. The left will dismiss all this without engaging their brain

In a contract, both parties have obligations. If the government doesn't deliver on its part, then the other party is unable to deliver on its part (VTEC premium payments). Where is the criticism of Network Rail? Not a signatory of the franchise agreement but a very key player and once again failing to deliver the benefits the country so desperately needs. Railways in private hands with less power for the unions please.

Brian Souter has little active involvement these days in Stagecoach and it is now Martin Griffiths pulling the strings.
Souter is till very much involved in transport but through his own Souter Holdings company with interests such as Polish express coach services and buses in New Zealand.