The last Royal Yacht, HMY Britannia, having seen more than 43 years’ service, was decommissioned at the end of 1997, with no replacement considered at the time, as this would have had to be resourced from a defence budget already under pressure - and subject to further cuts in succeeding years. Since then, campaigns to fund and build another Royal Yacht have come to nothing. 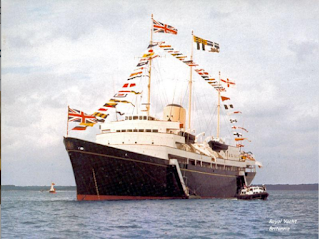 That thought did not occur to the remaining hacks and pundits at the increasingly desperate and downmarket Telegraph: ever ready to demonstrate their loyalty to the Crown, those at the paper have been campaigning for another Royal Yacht on and off since September last year, when they nicked the idea from the Sun’s alleged “Westminster Correspondent”, the odious flannelled fool Master Harry Cole.

Cole had invented a pack of lies about a new Royal Yacht; the Tel in its desperation took this up as a “campaign”. Now, a group of Tory MPs is equally desperate, and so the Tel’s Christopher “No” Hope has brought forth “Britannia to win the Lottery! Fifty Tory MPs back new lotto game to let public pay for new royal yacht”. This is crap, and going nowhere.

We can see this as the MP fronting the idea of a Boondoggle For The 21st Century is none other than Craig Mackinlay, now under investigation for, er, irregularities with his election expenses after the Tories called in supporters from all over the country to help him resist the challenge of former UKIP Oberscheissenführer Nigel “Thirsty” Farage in 2015. 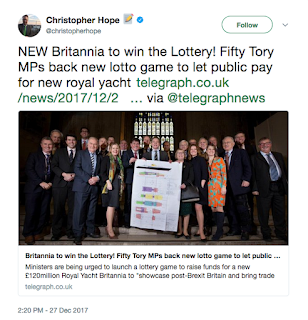 No matter, the Tel has gushed “Using funds from a new national lottery game to pay for a new Britannia would allow ordinary Britons ‘the pride of having a stake’ in helping to fund the new yacht which would ‘showcase the best of British business and project our humanitarian role across the globe’, the MPs said”. But it’s still crap. 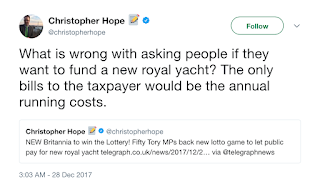 We also have a superb example of how the Press and Pundit Establishment is totally out of touch with the world outside their hermetically sealed bubble, with Hope expressing surprise at the backlash to his idiotic suggestion: “What is wrong with asking people if they want to fund a new royal yacht? The only bills to the taxpayer would be the annual running costs”. Yeah, right. Britannia had a crew of 271. That’s around £15 million by itself.

You can at least double that with maintenance, fuel and the rest. How many nurses could that money fund? How many food parcels for the needy? How much in housing repairs?

The Telegraph and all those Tory MPs are living in Cloud Cuckoo Land. No change there.
Posted by Tim Fenton at 10:00

It was obvious that the Queen was very attached to the ship and upset to see it go but she's 20 years older now and they are quite open about her not wanting to travel far. And it would be another 5 years or more before any new ship was ready.

So main candidate for use would be Charles. Has anyone asked him whether he wants it?

"Fifty Tory MPs have written to three of Theresa May's most senior Cabinet ministers".
BoJo? Davis? The disgraced former defence secretary Dr Liam Fox? The names of the three cnuts are behind the Telegraph firewall. And can stay there as far as I care.

Any ship would be a security nightmare for the Royal Navy already overstretched by budget cuts and excessive demands.
A Royal Yatch would need heavy protection especially with pirates around who would delight in seizing the silly boat and ransoming the crew and Royals.
They can hire a boat but with their own money.

Let's get rid of ALL the von Windsors and save ourselves a bloody fortune.

Take back all the property their predecessors stole since 1066.

In short, just fuck the useless Ruritanian meffs right off. It is almost 2018, after all.

Absolutely, Anon. We in the intra-M25 community are champing at the bit. Let's get this rolling.
What do you propose for item one on Monday morning?

Anything to help, Bertieee. After the von Windsors have gone, how about legislation for these:

1. An elected head of state.

2. Abolition of the unelected "House of Lords".

2. An elected second chamber of government.

These are three items, not one. There's plenty more, but can't have your head spinning too early can we?

Meanwhile, don't forget to knuckle your forehead as you pass Buckingham Palace, to kick a few homeless and to look the other way from Grenfell Tower. After all, it is what your kind of mentality does best. Especially on Mondays.

Actually, I'll go against the flow here. The House of Lords is an undemoratic anachronism. And they seems to display a lot more common sense than the bunch of power-hungry wank-buckets we end up with in the House of Commons.

Yes, they are split along party lines, usually, but they have no problem working together, independent of the formal parties. By a quirk of genetics, the "Hereditary Lords" ended up with a random mix of personalities. Yes, some barking mad ones but that better represents the population than the career politicians in the commons.

As well as them, the drip feeding of Life Peers add real life experience. FFS, Floella Benjamin is in there!

Plus - I'd rather have a beer with "The Lords" than "The Commons".

Thus, Slide Guy shows why this will never be a democratic country.

Turkeys DO vote for Christmas.