Some anti-Semitic tropes get called out as soon as they are deployed, but all too often, they are allowed to slide, and the issue of Britain’s departure from the European Union has provided some superb examples of the genre. It has also shown up some of the more, shall we say, eccentric elements of the Europhobic right for what they are. 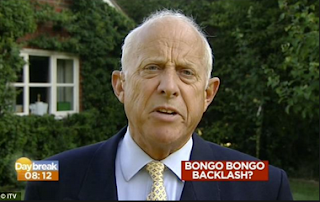 Godfrey Bloom: yes, he made that gaffe too

Take, for example, former UKIP MEP and purveyor of foot-in-mouth idiocy Godfrey Bloom, who was too poisonous even for the Kippers, having the party whip withdrawn in 2013 before being forced to leave the European Parliament the following year, to the great relief of many who wished it had happened rather earlier.

Bloom claims to be a “Professor”, but this, as with many of his utterances, should be taken with the largest available pinch of salt. He is, though, honorary President and chief economist of the Ludwig von Mises centre, named after one of those in the so-called Austrian School, without whose wisdom their home country managed rather well, but whose outdated views on Economics have been lapped up by the libertarian right. 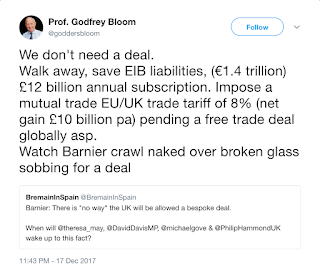 The von Mises centre tells “As a guest lecturer at Cambridge University in the 1990s, Bloom predicted the failure of the Euro”. Sadly, this, like so much else emanating from his North and South, has failed to materialise. But the anti-Semitism certainly has. 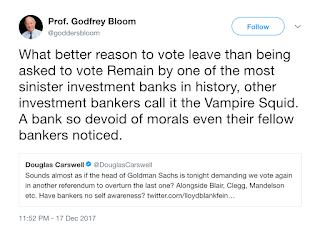 So it was that, after pausing to tell his adoring followers “We don't need a deal. Walk away, save EIB liabilities, (€1.4 trillion) £12 billion annual subscription. Impose a mutual trade EU/UK trade tariff of 8% (net gain £10 billion pa) pending a free trade deal globally asp. Watch Barnier crawl naked over broken glass sobbing for a deal”, something else that bears little relation to reality and isn’t going to happen, out came the smears. 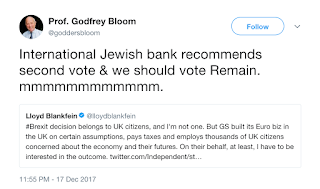 Noting that Douglas “Kamikaze” Carswell had been having a go at Goldman Sachs - not that this is code for “Jewish”, you understand, he mused “What better reason to vote leave than being asked to vote Remain by one of the most sinister investment banks in history, other investment bankers call it the Vampire Squid. A bank so devoid of morals even their fellow bankers noticed”. And what is “sinister” about Goldman Sachs?

We soon found out. “International Jewish bank recommends second vote & we should vote Remain”. Why not throw in George Soros and claim a full house? He’s certainly good on the conspiracy angle, too: “MSM, please stop putting Europhile civil servants on to tell us we can't walk away. They are the fifth column. They want us to stay, stop giving them a platform pretending they are 'honest brokers' they are lobbyists”. 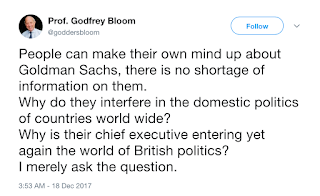 Still, on he wriggled, not getting himself off the hook: “People can make their own mind up about Goldman Sachs, there is no shortage of information on them. Why do they interfere in the domestic politics of countries world wide? Why is their chief executive entering yet again the world of British politics? I merely ask the question”. They don’t, and he isn’t.

Godfrey Bloom shows us where the real anti-Semitism lies. And it’s not on the left.
Posted by Tim Fenton at 12:31

Goldman Sachs are indeed part of the international bankers conspiracy that caused the 1928 Great Depression. (You know, like the Great Crash of 1929 and all the other crashes, scams and swindles such as Soros's - yet another who has never done a stroke of work in his life - billions made out of international currency manipulation.)

But it's got fuck all to do with "being Jewish".

It has everything to do with Goldman Sachs being lying, hypocritical, uncharged criminal profiteers with the conscience of a starved rat. In the USA, most of said rats belong to self styled "born-again" Christian factions. In Britain, it's just the usual collection of spivvy gobshites in Canary Wharf, Westminster and Whitehall. All of it supported by mainstream media liar clerks and "academic professor" bullshitters like the ludicrous Bloom.

Just watch them let rip after Brexit. You ain't seen nothin' yet. They'd kill your granny for ten cents on the dollar.