As Zelo Street regulars may recall, last year the increasingly downmarket and desperate Telegraph paraded before its readers a junior doctor who was in favour of the new contract being imposed on the profession by Jeremy Hunt (the former Culture Secretary), only for this blog to point out that Adam Dalby had never actually practised medicine. He was in his foundation year, and was yet to find work in the NHS or elsewhere. 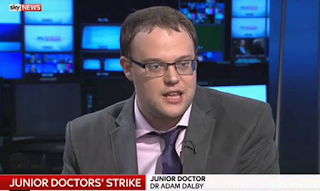 But he wasn't, was he, media people?

Undeterred by this revelation, Dalby then wangled a double-page spread for the Daily Mail, which by the most fortunate of coincidence told readers exactly what the legendarily foul mouthed Paul Dacre wanted them to hear: that the BMA was a hotbed of militancy, that the contract before junior doctors was wonderful, and that the only people who thought otherwise were Rotten Lefties (tm) in hock to Jeremy Corbyn.

It gets worse: Dalby also likes to Retweet the smears of the perpetually thirsty Paul Staines and his rabble at the Guido Fawkes blog, including the recent hit-jobs on Labour’s representative for Kensington, Emma Dent Coad. Somehow, the smearing of Ms Dent Coad happening at the same time as a report into the Grenfell Tower disaster evaded Dalby. He is also a prolific Tweeter of other Labour smearers. 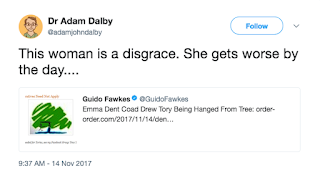 So it is not unusual to see attacks on the likes of John McDonnell and Diane Abbott turning up in his Twitter feed. What should also not be a surprise, then, is that Adam Dalby is not a mere Labour basher or right-leaning sympathiser, but a Tory activist to boot. Moreover, he is no mere ordinary Tory Party member: this not-really-very-experienced Junior Doctor has been unveiled as the new policy director for Activate.

This is the body which likes to style itself as the “Tory Momentum”, and whose Twitter bio talks of “An independent organisation creating a united platform for young conservatives and returning power to the grassroots”, although the Twitter feed, far from campaigning on grassroots issues, merely recycles CCHQ propaganda, Retweets Tory MPs (especially those on the right), and echoes the smears of The Great Guido.

Sadly, Activate has not enjoyed a happy genesis: it got off to a difficult start, after its WhatsApp group was rumbled: “A young Tory campaign group has apologised after members posted sick messages about ‘chavs’ in a Whatsapp group … Vile messages sent in an ‘Activate’ group say things like ‘gas them all’ in relation to the working class stereotype of ‘chavs’” told free sheet Metro. And now a non-doctor has joined them. 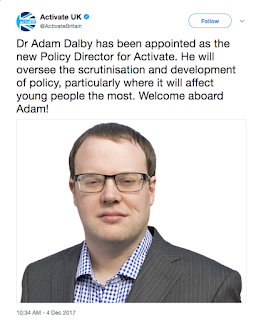 The organisation which not only had its Twitter feed hacked, but was ridiculed for, as the Guardian pointed out, “The group’s use of multiple hashtags and a meme that was last popular in the early 2000s led to widespread derision on the social network”. Now, it seems the Tories’ idea of being down with Da Kidz is to bring on board someone who claimed to be a Junior Doctor, but was then found not to be.

Anyone would think the Tories don’t understand those under, er, rather more than 21 years of age. Plus ça change, plus c’est la même chose.
Posted by Tim Fenton at 16:27

Only readers of a certain age will get the non-doctor reference, but bravo sir, for slipping it in.

Just got it - thanks, Pete

He looks like a slightly younger version of a, I think, tory commentator (whos name escapes me). A pugilant smug tory at that.

As an ex-doctor, I had to google non doctor, but when I was training, working in hospitals etc all doctors were tories. I had to put up with all sorts of right wing rants against miners etc. This gent would have been completely unremarkable.

I wonder if mainstream media will preface any "interview" with said tory with the qualification "tory activist".

I doubt it. They'll be too busy putting the boot in on the NHS.

Would you want your daughter to marry a "doctor" who put profit before patient care?

Gracious me, it is almost as if the Medical Act 1983 doesn't quite clearly state that;

'Any person who wilfully and falsely pretends to be or uses the name or title of physician, doctor of medicine, licentiate in medicine and surgery, bachelor of medicine, surgeon, general practitioner or apothecary, or any name, title, addition or description implying that he is registered under any provision of this Act, or that he is recognised by law as a physician or surgeon or licentiate in medicine and surgery or a practitioner in medicine or an apothecary, shall be liable on summary conviction to a fine not exceeding level 5 on the standard scale'