When the Daily Mail ran the front page splash “Questions over ANOTHER Yard contract … MET BOSS IN NEW ‘CASH FOR A FRIEND’ STORM” back in October 2008, the firm at the centre of the paper’s libellous claim was no longer run by the man they had targeted, businessman Andy Miller. Miller was a personal friend of then Met Commissioner Ian Blair; the Mail then concluded that the contract won by the company was therefore dodgy. 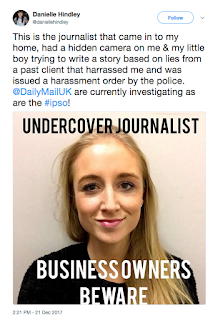 The obedient hackery of the legendarily foul mouthed Paul Dacre were wrong: Miller’s firm had won the contract fair and square. The subsequent libel action - Dacre declined Miller’s request to say sorry without going to court - took up several years and cost the paper around £3 million. But the Mail could stand that. Miller was sure that, had he still been in charge of the firm targeted, it would have been put out of business.

It may surprise those who believe the Mail titles to be pro-business, and especially in favour of all those small businesses up and down the country, to know that the inmates of the Northcliffe House bunker take such a callous attitude to the potential fate of those they choose to smear. Had that firm gone bust, several employees would have found themselves without a job. Yet the callousness endures today.

Zelo Street regulars will recall that, last week, the behaviour of Mail on Sunday hack Charlotte Wace passed before my inspection. She had used a hidden camera, in flagrant breach of the IPSO Editor’s Code, when visiting single mum Danielle Hindley, who is also the owner of a small business - a beautician’s in West Yorkshire. The resulting “story” has now been published. It is lame in the extreme. But it could be very bad for business.

Under the opening paragraph “Rogue beauticians are carrying out dangerous and illegal procedures which can leave women permanently disfigured, The Mail on Sunday can reveal”, Ms Wace eventually arrives at the complaint made by a former client of Ms Hindley. No evidence is ponied up to support the claim that a skin tightening procedure left her with “swollen eyes surrounded by a shocking array of burn marks”.

No medical practitioner has backed up the claim. The article carries no photograph in support of the inference of wrongdoing. And only grudgingly does Ms Wace concede that the procedure described is not illegal. But MoS readers are told “Ms Hindley, who has a conviction for a financial crime, said she had two days’ training earlier this year”.

Those who have unearthed the Mail titles’ business relationships with individuals who have rather more than the odd conviction - private investigators, purveyors of illegally gathered information, bent coppers and the like - may allow themselves a wry smile.

But the nastiest thing about Ms Wace’s article is that the power of the MoS’ megaphone - especially as the name and location of Ms Hindley’s business is spelt out in the article - is highly likely to have a severely adverse effect on trade. The way the Mail titles use the No-Smoke-Without-Fire nudge-nudgery is likely to prove harmful over the coming weeks and months. Even if IPSO find in her favour, any damage will by then have been done.

Danielle Hindley has done nothing wrong. The MoS has no evidence to suggest otherwise. Yet their guilt-by-association article could bust her business. And the Mail titles won’t give a damn if it does. That’s our free and fearless press for you.
Posted by Tim Fenton at 12:15

Plainly Danielle Hindley doesn't matter to the neonazis at the Daily Heil.

She's only from Yorkshire.

'Again I tell you, it is easier for a camel to go through the eye of a needle than for an inhabitant of the choking cesspit that is the land inside the M25 to enter the Heavenly Kingdom of Anonymous.

When the disciples heard this, they were greatly astonished and asked, “Who then can be saved?”

Anonymous looked at them and said:
'No fucker, save we who suffer from the Regional Cringe, for therein lies Purity and Salvation'.

Yes, but she's from WEST Yorkshire. Plainly a commie who deserves everything she gets from that nice fair minded democratic Mr. Dacre

Danielle Hindley has obviously been wronged by the MoS. They provided no evidence or back up from medical professionals regarding this client. So why mention her in this article in the first place. It's so wrong that they can print this crap without any regard for actual facts! By the sounds of her She's a hard working single mum who is open about everything in her life.