Monstering the disabled is one of those easy hits for our free and fearless press: it’s hard to forget the vicious glee with which the Mail, with unfunny and tedious churnalist Richard Littlejohn in the vanguard, maliciously lied about the Motability scheme in order to whip up hatred and snigger as some of those in greatest need had their cars taken away from them. And today the Murdoch Sun has joined the game. 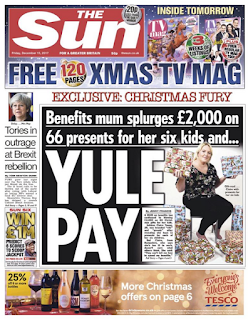 Indeed, such is the glee with which the inmates of the Baby Shard bunker have gone about their task that they have put today’s selected victim on the front page. “Exclusive … Christmas Fury … Benefits mum splurges £2,000 on presents for her six kids and … YULE PAY”. Laugh? I thought I’d never start. The article is even nastier.

“DING DOLE MERRILY ON HIGH Benefits mum-of-six Claire Young hits out at criticism and says her six kids shouldn’t miss out on Christmas gifts … Defiant dole mum, Claire Young, 29, has defended blowing £2,000 on Christmas gifts for her children”. Yeah, terrible innit, some poor woman puts aside £50 a week from the benefits her family receives, so that they can at least have a decent Christmas. I mean, that’s almost 40% of what the Sun’s editor typically blows on one of his gourmet evening meals out.

It’s only when readers drill down into the small print that they see it’s a disabled person who is being bullied here: “ex-barmaid Claire, who hasn’t worked since 2012 because she has a painful condition called fibromyalgia … Claire, whose fibromyalgia causes chronic fatigue”. Want that translated? She suffers from M E. And if you look in the list of benefits the Sun has helpfully provided, you’ll see her husband also has a disability.

Apart from Housing Benefit, which the family don’t see as it goes straight to their landlord, there are two tell-tale items: “£62.10 ‘Carers allowance for husband’ and £75.25 ‘PIP for Claire”. You don’t get PIP for nothing. She has to be suffering from some kind of disability to receive that. Still, the usual mean-spirited Tory MPs have willingly chipped in.

Despite Ms Young stressing “We go without over the summer holidays and I have one pair of shoes so I can save for Christmas for my children”, up pops Alec Shelbrooke to bluster that hard-working people “will be appalled by those apparently playing our social ­security system for a fool”. He didn’t bother to check his facts beforehand, either.

Also not bothering with such trivialities as facts were Andrew Rosindell, thundering “This is a flagrant abuse of the generosity of our benefits system … To spend so much on so many gifts is a disgusting extravagance” (being thrifty clearly is sinful in his world), and David Davies (not the Brexit secretary) talking of “people who are choosing not to work and still manage to live the high life”. That’s the “high life”? What’s he been supping?

Davies, one of the more revolting Tory back benchers, also ranted “This kind of taxpayer-funded extravagance shows that while we have made steps to encourage people into work, there is still a lot to do”. THEY’RE BOTH SODDING DISABLED. ER, HELLO?

Still, makes a cheap hit for the Murdoch goons before they all go off to spray their wads up the wall, eh? One day, some of them might even locate their consciences.
Posted by Tim Fenton at 15:40

Aha, would this be the same David Davies who votes against human rights and equality issues whilst investing a couple of grand of our money - claimed as expenses - in a family business. Nice chap.
Bit of a hypocrite, bigot and part time fascist but a credit to the Tory party nonetheless.
Should go far........preferably somewhere else.

What else to expect from gutless Murdoch scumbags?

They can and will get even worse. As did the Nazis.

No surprise that alec (The fat helmet from elmet) shelbrooke has waded in.

He's the fat turd that wants to force the unemployed into separate queues in the supermarket to use their govt. issued cards that can only be used to pay for food instead of having cash to spend how & where they choose.

Fat f***ing imbecile. Twunts like him don't get the abuse they deserve.

I used to be town librarian for Monmouth and encountered Davies on several occasions. In fact I've met and worked with several MPs over the years, from all mainstream parties. Davies was by far the worst. Stunningly ignorant and only interested in himself.

She saved up the money. I can't see a problem with that. What they want is for disabled and those on low incomes to live in hovels existing on nothing but bread and water, wearing rags. Poor people can't possibly be allowed nice things according to them. Makes me very angry.

Ranks with the Torygraph getting outraged at the "misuse" of direct payments for holidays etc. No longer applies,sadly but would hate to have such media cover our case,not least employer yet not expected to work would have caused some confusion.How dare the sick/disabled not have a slot in their head and be outside Sainsbury's on a Saturday morning or literal cap in hand.We can't feel superior in particular if not looking suitably wretched and cheered by our pat on the head.Of course,far better in the good old sensible days when institutionalised,day centre or nought and lives of isolation.Even if in work they are relatively unproductive according to the Chancellor,despite all evidence to the contrary.Fascistic utterations are not always accompanied by a moustache and Swastika.