Damian Green - One Hand On The Keyboard

The leadership of the increasingly beleaguered Tory Party remains as it has been since the General Election earlier this year: Theresa May is still in 10 Downing Street, Spreadsheet Phil is next door, with Amber Rudd at the Home Office, and London’s formerly very occasional Mayor Alexander Boris de Pfeffel Johnson identified by the initials FO. And there behind the scenes is deputy PM Damian Green. 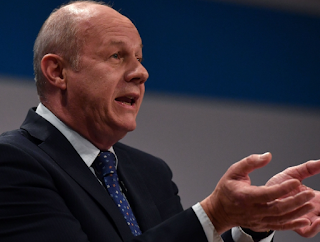 As the BBC has reported, “A former Scotland Yard detective has told BBC News he was "shocked" by the amount of pornography viewed on a computer seized from the Commons office of senior Tory MP Damian Green … Neil Lewis examined the device during a 2008 inquiry into government leaks and has not spoken publicly before … He said ‘thousands’ of thumbnail images of legal pornography were on it”. And there was more.

“Mr Lewis, who retired from the Metropolitan Police in 2014, said although ‘you can't put fingers on a keyboard’, a number of factors meant that he was sure it was Mr Green, the MP for Ashford, Kent, who was accessing the pornographic material … His analysis of the way the computer had been used left the former detective constable in ‘no doubt whatsoever’ … ‘The computer was in Mr Green's office, on his desk, logged in, his account, his name’”. And the retired cop’s conclusion?

“‘In between browsing pornography, he was sending emails from his account, his personal account, reading documents... it was ridiculous to suggest anybody else could have done it’ … Similar material had also been accessed on Mr Green's laptop, he claimed”. And, as Jon Stewart might have observed, two things here.

One, it has to be stressed that today’s revelations are, I am informed, totally unrelated to press investigations that have been going on for several days now. That means it is going to get worse - much worse - for Green, and for Theresa May’s Government, very soon. And two, it has to be restated that having those images on a workplace computer, and viewing them in work time, would be an instant dismissal offence in many workplaces up and down the country.

Yet Damian Green clings on, and, worse for the Tories, there are many in the party who are willing to go on record with their support for him. They need not bother: as I have already said, Green is finished. But now we have the added frisson felt by many who will have been exchanging emails with him at the time at the realisation that he was probably accompanying his attention to business with a quick Bell And Crank.

And so the old-tech combination of dirty book and hanky was consigned to the dustbin of history. By this much has the information revolution advanced our politics.
Posted by Tim Fenton at 12:21

the little pictures that take you to other things when clicked on.

I suppose one defence could be that he'd just made a lot of visits to Mail Online and hadn't cleared his temporary files.......

Yes Green is finished and won't be missed and I await the day all the Tories are booted but I'm alarmed people just take for granted an ex-cop is telling the truth. And is there no confidentiality regarding government Minister's PCs even if they are Tories?.
What other confidential material has this copper viewed and who feels no compunction in revealing what could be highly confidential material?.
I want the Tories gone asap but simply just accepting unproved allegations is not good enough.
Never ever and I don't care which party you support. You either respect notions of natural justice and the Presumption of Innocence or you aren't too keen on democracy and the rule of law.

This is not a "left" issue it's a matter of whether people blindly accept partisan claims because it suits them. We get enough of it from the Tory media and anyone who simply accepts claims made by police must have been asleep for the last 70 years and ignored so many travesties of justice perpetuated by lying Met officers and so many regional forces who have perverted the course of justice.

And now David Davis has threatened to go if he is 'unfairly' sacked.

Why do I feel this is David Davis feeling the Brexit flames getting close to his neck and he needs to be out of it PDQ?

Okay, I'll be the first with this:

I must say the image of Green having sex in any form boggles the imagination. In the Missionary, the boring old bastard would probably rock himself to sleep while droning on about "tory family values".

Sam.
"but I'm alarmed people just take for granted an ex-cop is telling the truth."
Me too, but what's in it for him if he isn't? A lot of convictions could be unsafe if the testimony of someone who forensicated computers was suspect.