The old adage telling that something looking too good to be true might well be too good to be true was thrown out the window yesterday by many in the EU-hating media as they latched onto a pronouncement from a German politician that confirmed their worst fears - and most outlandish scare stories - about the European Club. Sadly, it did not take long for the whole charade to unravel, and leave them covered in rather more than confusion. 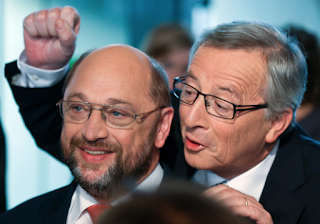 Martin Schulz, leader of Germany’s centre-left SPD, called at his party’s conference yesterday for a “United States Of Europe”. Having indicated his desire for a federal Europe, he declared “Such a constitutional treaty has to be written by a convention that includes civil society and the people. This constitutional treaty will then have to be put to the member states and those that don’t approve it will automatically have to leave the EU”. 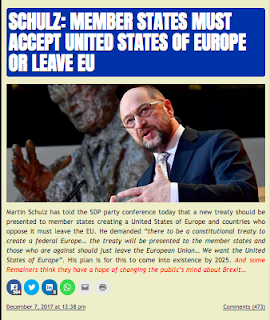 That Schulz is in no position to make such demands stick, that he’s shifted his position more than once on this issue, and that it isn’t going to happen - every member state has a veto, remember - was not allowed to enter as the easily persuaded among the Europhobic fringe went off the end of the pier in no style at all.

The perpetually thirsty Paul Staines and his rabble at the Guido Fawkes blog sneered “And some Remainers think they have a hope of changing the public’s mind about Brexit”. The Great Guido also called Schulz’ party “the SDP”, so the usual accuracy, then. 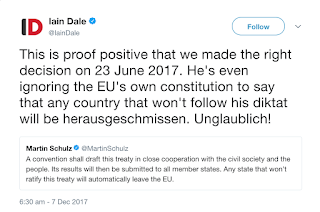 The punditry that followed fared no better. Patrick Christys of the Arron Banks propaganda site Westmonster sniggered “Here you go Remoaners, here's the true face of your European Union. A full United States of Europe by 2025 and if member states don't agree, they're automatically booted out. Now tell me you'd win a second referendum”.

His colleague Michael Heaver snorted “This is huge … Many will follow UK out of EU” No they won’t. Nile “Chauncey” Gardiner, the idiot who claimed JFK made his “Ich bin ein Berliner” speech at the Brandenburg Gate, chipped in with “Britain voted to leave the EU to escape a United States of Europe”, while Iain Dale went totally OTT with “This is proof positive that we made the right decision on 23 June 2017”. Wrong, wrong, wrong.

Nigel “Thirsty” Farage had to characterise it as “Us” and “Them” as he claimed “If this is the route they are taking, it could be a very small European Union. #ThankGodWeAreLeaving”. And foolish Kate Hoey declared “How right the UK public were to vote to Leave”, citing the Fawkes blog as an authoritative source. Bad move.

How bad? Gergely Polner had a simple and inconvenient observation to contribute: “That's against the EU Treaties”. So it’s not happening. Jon Worth went further: “Note to hacks / politicians / Brits getting annoyed / frustrated / surprised by Schulz: 1) He is not going to be the Chancellor 2) What he’s saying about the EU doesn’t even have wide support in his party 3) He’s always hectoring and negative … Think of that before commenting!” 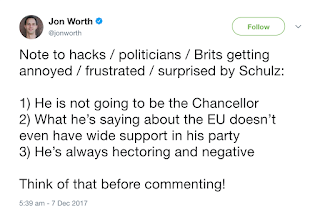 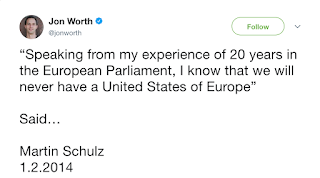 Sadly, far too many had not thought first, and Worth had to then remind them “‘Speaking from my experience of 20 years in the European Parliament, I know that we will never have a United States of Europe’ Said … Martin Schulz 1.2.2014”.

It was too good to be true. It was, in reality, Fake News. No surprise there, then.
Posted by Tim Fenton at 12:23

Would that be Kate Fox Hunting Blairite Hoey?

Not really fake news,just the usual direct relationship between strength of indignation and absence of any knowledge, the same thing which has characterised so much of the Brexit 'debate' in this country. It almost qualifies as a distinguishing characteristic of the English.( Ok, forget the almost).

Gardner appeared in front of the US Foreign affairs committee sprouting his German Cars bullshit.

The tweet links to a 2 hr video, and the American Gregory Meeks was more up to date and hinted a few times that he is talking absolute shit.

What was this then?

Pundits really are that stupid.

And of course was it not Winston Churchill, you know the darling of Tory and ukip eurosceptics who talked of creating a United States of Europe? I rather think it was.