While the Murdoch goons at the Super Soaraway Currant Bun have said very little directly about Pizza Hut Delivery’s apology for their joint promotion with the paper, their apologists in and around the media have been incandescent with rage. The act of regret has been slammed as an attack on free speech, political correctness gone mad, the rise of “lefty fascists”, whatever one of those is, and of course bullying of the weak. 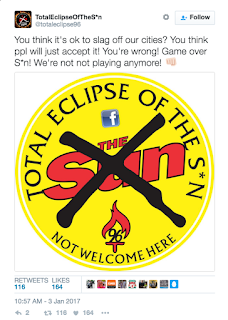 The abuse aimed at those with the audacity to register their concern about the Sun’s regular use of hate speech has been as a veritable tsunami, typified by Ian Collins, another of those “opinionated” LBC hosts: “Why is a pizza company apologising to a group of hardline left-wingers about a newspaper promotion? If you don’t like a paper, don’t buy it. End of. This isn’t North Korea. People have choices. Stop appeasing fascists masquerading as the good guys”. Hardline. Left-wingers. Fascists. 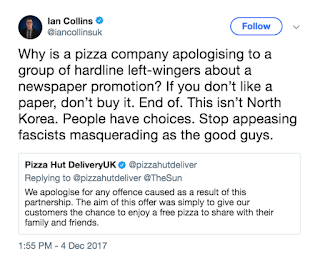 Dan, Dan The Oratory Man was also aghast: “There is nothing wrong with advertising in the nation’s most popular newspaper, @pizzahut. Get off your damn knees … It's a few hundred professionally outraged agitators from Stop Funding Hate, for Heaven's sake”. 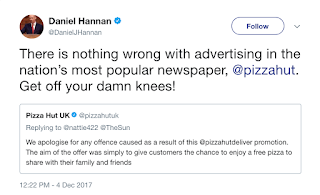 Mahyar Tousi, a Tory candidate (name ring a bell? He’s an old pal of Mark Clarke and André Walker), was equally firm in his response: “When free market and a free society offend politically correct Left wing snowflakes, Pizza Hut should NOT apologise”.

Kevin Schofield, of Politics Home but formerly of the Sun, asked “Pizza Hut apologise for advertising in the country’s biggest selling newspaper because some people were offended? Really?”. And the Society of Editors “has spoken of its concerns for press freedom and democracy”. Yeah, right. The freedom to peddle hatred and bully MPs. 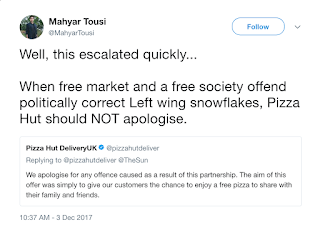 But, as Jon Stewart might have said, two things here. One, as Stop Funding Hate has pointed out, “No amount of name-calling will change this basic fact: People who are affected by media hate, or concerned about media hate, have a right to ask the companies they shop with not to fund newspapers that demonise and discriminate”. Quite. 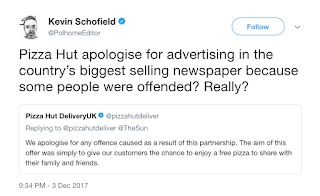 And two, not every Pizza Hut Delivery franchise is impressed by the Sun promotion, especially not on Merseyside, where the paper has been persona non grata ever since then editor Kelvin McFilth made his fateful decision to maliciously and baselessly smear the Hillsborough stadium disaster victims and their families.

The Liverpool Echo has reported that “A number of franchises across the region said they would never have honoured newspaper offer” and gone on to tell “Pizza Huts across Merseyside are running their own ‘You’ll Never Walk Alone offer’ to apologise for a S*n coupon meal deal … Branches in Tuebrook, Knotty Ash, Moreton, Liscard and St Helens have all launched a 50% promotion as a way of repaying those who were offended or insulted by the S*n offer”. Both banks of the Mersey, then. 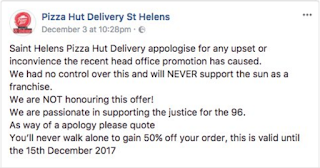 That shows what Stop Funding Hate means by the right of those affected by media hate. It’s got stuff all to do with eroding press freedom or democracy. Or fascism. Or Rotten Lefties (tm). Or snowflakes. Or political correctness. Or professional outrage.

It’s simply a matter of personal choice. Like suggesting people Don’t Buy The Sun.
Posted by Tim Fenton at 12:28

Last time I looked, “lefty fascists” was an oxymoron.

As someone who was at Hillsborough I tweeted Mahyar Tousi to explain the pain caused by The S**-His reaction was 'Newspapers lie. Get used to it'.

Last time I looked, The Scum was owned, run by and employed only far right racist cockney gobshites inside the M25 ghetto.

All of that is of course an outrageous generalisation......So, Scum employees - how does it feel? If you have any human feelings that is......

I expect they feel that you regularly demonstrate that you're as simple-minded as they are, Anonymous 14.13, and they're grateful for the company and the solace you give them (though I can't speak for jellied-eel scoffing pearly king Rupert Murdoch).

Perhaps the news has yet to penetrate to Burlington.

But good luck with your late morning stroll and your "pals" at News Corp.

A Tory says this:

What a maroon. No, Tousi, you ignorant peasant. It is you Tories who claim to like the free market so much, yet have temper tantrums whenever it doesn't go your way- seeing as the freedom of Pizza Hut to listen to customers and decide not to help along the right-wing Daily Mail is a central part of that free market.

You're the one offended, Tousi, not us.