With remarkably coincident timing, as the Met’s press chief Dick Fedorcio prepares for an extended grilling before the Leveson Inquiry, comes a further tranche of arrests in connection with Operation Weeting, which is dealing with the fallout from Phonehackgate and the behaviour of those in and around the now defunct Screws. And the six nicked include Rebekah Brooks and husband Charlie. 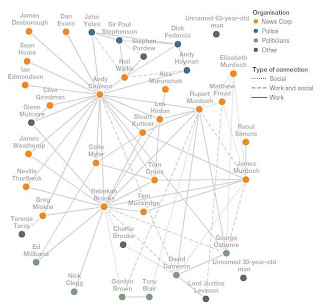 The arrests – all carried out between 0500 and 0700 today – were made after consultation with the Crown Prosecution Service (CPS), which suggests that someone is about to be formally charged with one or more offences. The line from the Met is that all six have been brought in under suspicion of perverting the course of justice. None of the arrests was made with prior notice.

All of this, though, won’t take any heat off Fedorcio, whose closeness to Neil “Wolfman” Wallis resulted in an investigation where he was put on home leave last year. The Independent Police Complaints Commission (IPCC) has passed a file on its deliberations to Scotland Yard, with the clear inference that some kind of disciplinary action is imminent.

So Fedorcio’s appearance before Leveson – where the possibility of action against him may allow him to bodyswerve some of the more uncomfortable questions – should be seen as something separate from the arrests. The focus should, instead, be on why the Met considered it necessary to nick the six involved without notice, and to look for charges to follow in short order.

And who else has been nicked? Andy Coulson, given the ages and addresses of the remaining four, does not appear to be one of them. Nor do any of the senior current or former News International (NI) figures such as Wallis, Neville Thurlbeck, Stuart Kuttner, Greg Miskiw, or indeed Clive Goodman or Glenn Mulcaire. These look like serving reporters, editorial staff, or perhaps administrators.

So who may be next? Well, looking at the graphic that has helpfully been compiled by the BBC (see above), a look at the web of players in and around the Murdoch empire offers up all manner of possibilities, not least that one or more politicians could get sucked in. Of these, the favourites have to be Young Dave and the Rt Hon Gideon George Oliver Osborne, heir to the Seventeenth Baronet.

Anyone believing that Cameron could not possibly find himself embroiled in this newly forming mire need look no further than his involvement in the Damian Green arrest and the subsequent attack on Bob Quick – which I examined the other day – as well as his long friendship with Rebekah and Charlie Brooks. And that is before his dalliance with the Murdoch clan is considered.

There will be yet more on this story later in the week. Stay tuned, folks.

[UPDATE 1430 hours: one of those arrested is Mark Hanna, NI head of security, with one of the remaining three simply referred to as a "non-editorial employee", which suggests I was right to include admin staff in my list of "possibles". The Brooks house, and a number of other residences, are being searched.

This looks increasingly like a move against evidence tampering and removal - such as the deletion of emails and other computer records - and the inclusion of Charlie Brooks in the list of those detained may not be unconnected to the "laptop in the bin bag" incident from last July.

Brooks was clearly very keen to have the device, found by a cleaner in the basement car park of his London apartment, returned to him, but had to wait until the Met had figured out who put it where it was found, and unlocked it to check out the contents of the hard drive.

What has to come next is for someone to be charged: Rebekah Brooks and her husband will expect the Met to put up or shut up after this morning's raid. Sadly for them, the decision, when it comes, may not be to their liking. Again, more soon]

Sorry, I can't read these posts without thinking of all the trolls on Liberal Conspiracy shouting 'Non-Story! Nothing to see here!'.

Do they still do that, I wonder?

I think you should add Alex Salmond to your list of politiciains. He's been cosying up to Rupe big time - most of it AFTER the phone hacking came to light.

The trolls are now probably trying to work out how to destroy their e-mail archives.