I’ve said previously (summary HERE) that the so-called Taxpayers’ Alliance (TPA) does not engage with the Government bodies it so joyously and routinely demonises, but rather snipes at them from a distance, relying on Freedom of Information (FoI) fishing expeditions, and otherwise making false claims and assumptions from little more than job adverts. And now they have been caught out. 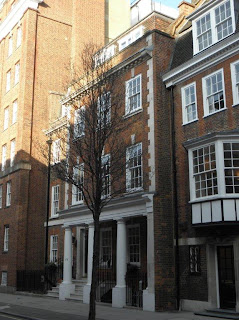 A lack of research from the second floor

On Wednesday, the TPA’s “grassroots coordinator” (the archetypal non-job) Andrew Allison took aim at Labour controlled Camden Council (those who believe the “non partisan” label take note) for promoting what he called a “non job”. The customary TPA circular logic is matched to the false assumption that there is already waste, and by this method, Allison concludes that there is indeed waste.

There is also a little sleight of hand: he claims that the Council now has more employees earning over certain thresholds, but this uses the same trick as the TPA’s so-called “Town Hall Rich List”, where anyone taking redundancy has their pay-off added to any salary and expenses to make it look as if that salary was far higher. The thought that this is a one-off expense is not allowed to enter. 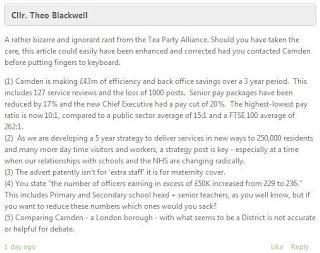 The smug Andrew Allison did not, however, have long to enjoy the fruits of his lack of labours: Theo Blackwell, Camden’s cabinet member for finance, weighed in and upbraided him for not having bothered to get in touch with Camden, then pointed out that the Council is actually making £43 million of savings over the next three years, along with the abolition of a thousand posts.

Moreover, the job advert that Allison picked on was not, as he asserted, “extra staff”, but cover for maternity leave. And it has to be pointed out to him that someone looking after what is intended to be a five year strategy is crucial if services are to be maintained and – hopefully – even improved. The councillor’s response underscores what I have said about the TPA’s approach. 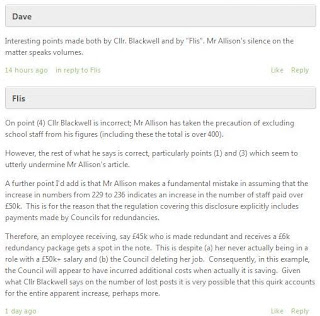 Another commenter notes the point about using redundancy pay-offs to make salaries look higher, and suggests that this could account for the apparent increase in the numbers of Camden staff being paid over £50k, and that this number, given the reduction in posts being undertaken, may actually be falling. The impression is given that the TPA has again been selecting numbers to suit its agenda.

As a third commenter puts it, “Mr Allison’s silence on the matter speaks volumes”. It certainly does.