Last night, Labour lost the Bradford West by-election, which, it is generally agreed, they should have held, although the party’s majorities in recent years have not been particularly high (less than 4,000 in the high water mark year of 1997), nor consistent (the Labour vote share fell in 1997, but rose in 2010). And the significant factor in the loss was the larger than life presence of George Galloway.

The former Labour MP, expelled from the party in 2003 over the Iraq war, fought a campaign that homed in on the Asian vote, and with the electoral wards of City, Manningham and Toller making up much of the constituency – along with Labour not seeing the man from Respect coming, with his stoking of resentment against recent wars in Iraq and Afghanistan – he prevailed.

That this was a unique set of circumstances and a worrying potential outbreak of sectarian politics, though, did not deflect one increasingly bitter and desperate critic of Labour from, by his own admission, jumping up and down: step forward Dan Hodges, whose expert knowledge of limited companies extended to believing that Ken Livingstone’s wife was a freelance worker. 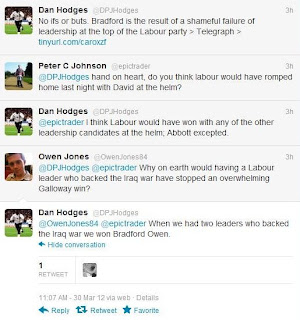 Hodges, who is becoming not so much a Blairite as a Blairite caricature, can be seen at his silliest when saying “It’s not just one by-election”. Wrong Dan, Bradford West is indeed just one by-election. He doubles down by also telling “When we had two leaders who backed the Iraq war we won Bradford”, not noticing that under one of those leaders Labour lost one seat in the city in 2010.

And Dan cranks up the hyperbole in his new role as supposed Labour presence at the bear pit that is Maily Telegraph blogland: “This morning the Labour Party is no longer fighting to win the next election. It’s fighting to stay in existence ... [this] is the most catastrophic result for the Labour party since Roy Jenkins and the SDP’s challenge in Warrington in 1981”. Jenkins lost that by-election, though. 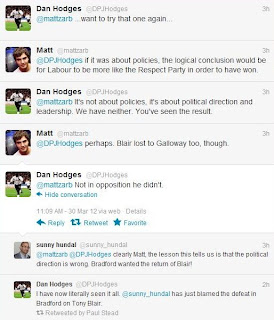 And opinion polls at that time briefly predicted a Tory wipe-out at the next election. Instead, they scored a majority of over 140. What the heck, though, Hodges is away and running: so desperate is he that he (characteristically) asserts that Sunny Hundal has said something he hasn’t, in order to take the heat off. And his comments fail to grasp the reality of what happened in Bradford.

Galloway secured the services of Naweed Hussain, who had been the campaign manager for retiring MP Marsha Singh, so his campaign had a head start, with probably the best local knowledge of all the participants. Labour made the mistake of not tackling him early on, and stopping the Respect bandwagon in its tracks.

Hodges isn’t for analysis, but for pulling the mardiest possible strop as Labour chose a leader he doesn’t like. Say goodbye, Dan. You’re out of time and credibility.