Dan Hodges was until recently at the New Statesman magazine. He is much quoted on the subject of politics. He is equally opinionated on what he sees as the double standards of many of those he finds there. And he is staggeringly ignorant of how a significant part of the labour market operates, something that came to light when he dropped a clanger very publicly on Twitter yesterday. 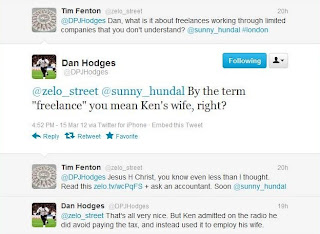 Hodges has reacted to the supposed revelations about the limited company run by London Mayoral challenger Ken Livingstone by finding him guilty on the basis that he is, well, guilty, because he’s a hypocrite and a lot of other equally ignorant (or, in the case of purveyor of dodgy journalism Andrew Gillligan, wilfully ignorant) people say so. The whole argument goes in a circle.

Nor is this an isolated occurrence: Nick Cohen attempts in a Comment Is Free piece to compare Livingstone to Al Capone, but sadly also shows his ignorance by asserting “Livingstone could avoid the higher rate of Income Tax ... and instead pay corporation tax”. Wrong. The two are not equivalent. If Livingstone’s income goes over the threshold, he pays a higher rate of income tax. Full stop. 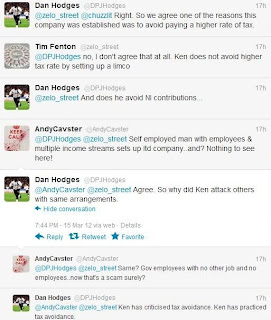 Hodges made his own inadvertent admission by assuming that “freelance” was a reference to Livingstone’s wife. It was not, and is not, as anyone working in that way could have told him – or Cohen – had they bothered to find out. Hodges also asserts that Livingstone said he had avoided tax to employ his wife – he didn’t – then assumes that his limited company enabled him to avoid higher tax rates (it doesn’t).

Moreover, it is automatically assumed, in another circular argument, that Livingstone’s condemnation of tax avoidance applies to those with the same arrangements as him. But anyone looking for past comments by the former Mayor which find adversely on the use of limited companies will find that there aren’t any: the only recent such remarks were directed at the owners of the Telegraph.

And, as any fule kno, David and Frederick Barclay, aka The Fabulous Bingo Brothers, reside on the Channel Island of Brecqhou, and thereby pay no tax in the UK. Theirs is tax avoidance by exile, something of an order of magnitude greater than the opportunity to avoid some National Insurance contributions, which in any case is countered by having to employ and pay an accountant.

This, together with Gilligan misrepresenting the retained profit figures for Livingstone’s company – adding three years together when the amounts are not cumulative – shows a woeful ignorance of how tens of thousands of freelances and small businesses work. Using a limited company isn’t a way out of paying taxes, but something that HMRC has in the past encouraged.

Hodges, Cohen and the rest ought to take a more intelligent position on this issue.

Indeed HMRC encourage you to become a limited company if you have a number of different employers or sources of income during a tax year (who aren't deducting tax and NI at source). It means that you have to do better book-keeping, and maybe use an accountant. The advantage for HMRC is that it reduces the risk that you "forget" to include some of your sources of income during the year.

It would be an abuse of this system if you in fact only have one main employer (who should be deducting tax and NI at source) but do it simply to reduce your tax and NI payments. This appears to be the case for a number of senior civil servants who were employed this way. If Livingstone is mainly living from various radio appearances and newspaper columns, it would seem to be a fairly normal arrangement.

Would it not be the case that several of the people criticising Livingstone also have very similar arrangements?

In the media unless you are a staffer, you would be either freelance or using a company. I'd guess the gormless duo at Last Orders.com have some interesting arrangements, Gilligan writes for more than one company, Cohen doesn't exist solely on his Cif and Observer stipend (who I know usually get freelancers to pay tax and NI).

I can't imagine Johnson having any other arrangement with the Telegraph than that of being paid by invoice.

What price a leak?

From memory, Gilligan is a staffer at the Tel. Staines owns Global + General Nominees, and it's registered offshore, in Nevis, so that would be a very interesting one to look at.

"Would it not be the case that several of the people criticising Livingstone also have very similar arrangements?"

That's not actually the point.

As far as I'm concerned, the only issue with limited companies arises when the device is used by those holding a publicly funded office, and who therefore should be salaried.
Efficient tax arrangements for the genuinely self-employed are a matter between them and HMRC.