As the prospect of a strike by tanker drivers, and the potential for forecourts to run dry over the Easter break, is brought into some sort of proportion – no thanks to idiot politicians like Francis Maude, now facing the significant task of removing boot from mouth over his “jerry cans” advice – the cheaper end of the Fourth Estate has been caught facing both ways over the affair. 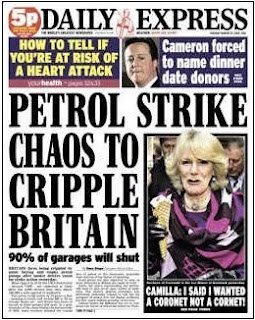 This is typified by the Daily Express, which today is attempting to calm a panic that it was partly responsible for stoking in the first place. The typically shameless process began on Tuesday, as the front page lead screamed “Petrol Strike Chaos To Cripple Britain”, despite there being no more than a ballot result from the disgruntled drivers, whose concerns were, no doubt by coincidence, not told. 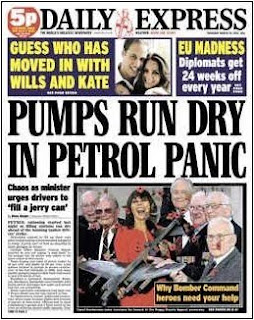 After the Government weighed in without first engaging brain – after all, there had still been no confirmation of a strike, and seven days’ notice would be needed beforehand – the paper was at it again: “Pumps Run Dry In Petrol Panic” came the Thursday splash. There was only one result going to come out of this kind of hackery, and that was yet more panic buying.

And so it turned out: because of inept Government urging to “top up” tanks, and yet more inept advice to store fuel in “jerry cans” (resulting yesterday in a woman suffering 40% burns after attempting to decant petrol from one can to another in her kitchen – there’s a good reason petrol stations are open plan and they ban smoking), the pumps did indeed run dry. 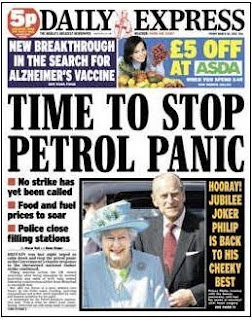 But nothing stands between the Express and its headlines, so today has come “Time To Stop Petrol Panic”. And it is finally admitted in the sub-head that no strike has yet been called. Problem is, immediately underneath that is “Food and fuel prices to soar”, which will have precisely the opposite effect intended by the main headline. It’s as if nobody at the paper is capable of prior thought.

Words can have consequences, Express people, even when your title is shifting no more than 650,000 copies against the two million plus of the Daily Mail or Sun. It would be good to see a little thought deployed and responsibility shown before some of those cheap and nasty headlines were composed – the panic means some poor soul is now in the burns unit at Wakefield’s Pinderfields Hospital.

The Tory buffoon Francis Maude may well pay for that with his job in Government. But the Express will keep on peddling cheap and nasty frighteners, and Dirty Des will keep trousering his wedge. And we know what that means: another Benchmark Of Excellence.