Fabrice Muamba – Not In The Eye

The near-death experience of Fabrice Muamba is by now well known: at the age of just 23, and with no previous history of serious illness, the Bolton Wanderers player collapsed on the pitch at White Hart Lane during a cup-tie with Spurs after suffering a cardiac arrest, to the clear distress of players and fans alike. He is now making a gradual and encouraging recovery.

Following the incident, there has been an initial outpouring of sympathy, and then – as seems obligatory nowadays – has come the questioning of why people do this, failing to see that the celebrity culture, especially concerning footballers and other sports stars, has been relentlessly promoted by the kinds of papers whose pundits are now in why-oh-why mode about it (pace Littlejohn). 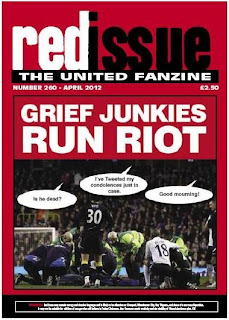 And so in turn there has been yet more controversy about whether some of the do-we-have-to-do-this-every-time-a-sports-star-or-sleb-is-in-the-news copy is appropriate in the circumstances. Wading into that controversy in typically unsubtle style has come Manchester United fanzine Red Issue, which prides itself in word bubble covers, in the style of Private Eye.

However, rather a lot of those passing outraged adverse comment on that cover do not seem to have read the words in very large point size saying “Grief Junkies Run Riot”. The point being made is that there is an awful lot of grief poured out over figures that are in the public eye: a Red Issue spokesman pointed out that the cover was directed “at the circus surrounding [the incident]”.

The thought also entered that the amount of grief poured out over slebs and sports stars is of an order far larger than that over those being trashed by the Syrian army, or even the steady escalation of the death toll among those fighting in Afghanistan. And those who assemble Red Issue will probably know that the Eye was there some time ago, after the death of Diana, Princess of Wales. 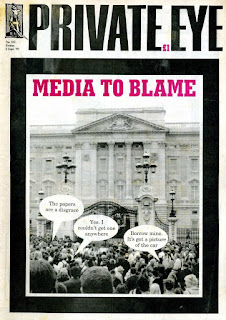 Many outraged subscribers cancelled those subs following the publication of Eye 932, with its “Media To Blame” headline. Again, the point of the cover – that the media had been insatiably pursuing the Princess for years, only to forget their culpability in the death and blame someone else while all the time milking the subsequent outpouring of grief – was lost in the horrified reaction.

The media is still largely to blame: while the pundits look on from the platform of sites like Mail Online, readers are force fed an unending diet of slebs and sports stars, the clear inference being that these are Very Important People, and indeed that they are more important than everyone else.

That’s not to diminish what happened to Fabrice Muamba, who is happily making a steady recovery. It’s just to show that we sometimes get things out of proportion.