Lock Up Your Gays

While the debate rages about the definition of marriage – the only moderately batshit Peter Mullen has invoked Nietzsche in sniffily dismissing the idea of same-sex unions in his Telegraph bully pulpit today – there is a debate going on in the background over what various religions say about homosexuality itself. This is a particular favourite of (yes, it’s her again) Tory MP Nadine Dorries.

Our Nadine’s bête noir on this one is Islam. She has decided that Islam decrees that gays should be executed. But opinion, and practice, varies widely: some scholars interpret the teachings of the Qur’an as allowing capital punishment, and some countries make homosexuality punishable by the death penalty. More secular states such as Turkey and Jordan do not punish. 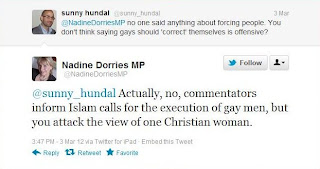 The verses of the Qur’an on which subsequent judgements of Islamic scholars rest also do not specify punishment, though they talk of “Turn[ing] them out of their town”, and “confin[ing] them to the houses until death takes them away or Allah opens some way for them ... as for the two who are guilty of indecency from among you, give them both a punishment; then if they repent and amend, turn aside from them; surely Allah is oft-returning, the Merciful”.

This suggests that any prescribing of the death penalty is the result of interpretation of the Qur’an by successive scholars over the centuries. Indeed, there is no unanimous view, although homosexuality is considered a sin (or even a grievous sin). Even in Saudi Arabia, home of Wahabi Islam, although the death penalty is available, it is rarely used in this case. 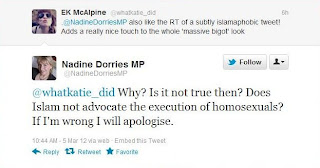 So what does the Judeo-Christian tradition say on the subject? Remarkably, when homosexuality is discussed in Leviticus – common to both the Torah and the Bible – the language sounds not unlike that of the Qur’an. Verse 18:22 “You must not lie with a man as with a woman: that is an abomination”. Verse 18:29 “for anyone who does any of those abominable things will be cut off from his people”.

This last is also open to interpretation: it could signify genital mutilation (not sure where the MP for Mid Bedfordshire stands on that one), being cast out or – in modern society more likely – imprisonment, or of course capital punishment, which, after all, causes one to be cut off permanently and very finally.

But the Bible – and let’s not excuse Leviticus by saying “it’s only the Old Testament so it doesn’t count” – does set down a sanction against homosexuality. So perhaps after she’s finished the finger pointing at Islam, Nadine Dorries would like to choose which of my three interpretations she prefers, or maybe nominate her own.

One thing is clear, though: being “cut off from his people” doesn’t equate to approval of civil partnerships, let alone marriage. Over to you, Nadine.

"These days, morality itself is merely what we find pleasant or agreeable. It is Benthamism: the notion that the only good is the maximisation of pleasure. As Nietzsche rightly said of it, “Pig philosophy.”"

Oooh, I can think of another belief system Neitzsche didn't like much.

Tim, you aren't obsessing a little over Ms Dorries are you? How about a month with no mention of her?

As far as I can tell, this is the first time I've mentioned her this year - on the blog, at least.

If I've got that wrong, by all means come back at me!

You're right Tim, you haven't mentioned her at all apart from:

And in this blog. Apologies for misrepresenting you.

Very droll. So I was wrong to say "mention". This is the first post that focuses mainly on her.

Dozens of subjects are raised as asides here. Perhaps that means there is some kind of even more massive obsession at work. Or maybe not.

It's slightly more likely that I've confused you with Dick Mandrake.