Anyone who wants to know is well aware that Richard Desmond’s newspapers are run on a shoestring by comparison to those owned by News International or Associated Newspapers. But the cheapness of the Express has hit a very obvious new low this past week, with all but one lead stories spun from press releases or sheer speculation. 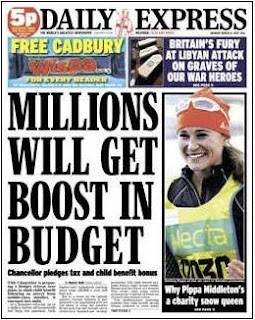 Nothing to report, but with added Pippa

Monday brought “Millions Will Get Boost In Budget”. Really? No, not really: Macer Hall’s piece is pure speculation about the upcoming Budget, with a number of “sources” saying things that match the storyline. 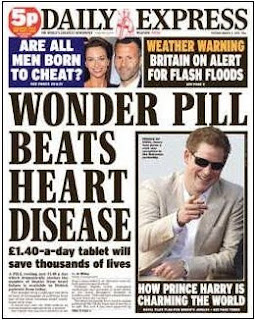 Phil Space, but with added Harry

Tuesday had the Express on more familiar Phil Space ground, with “Wonder Pill Beats Heart Disease”. It already does: the drug is currently used to treat angina, and may be used to treat heart failure. But trial data has yet to be examined. Hardly worth a front page splash, was it? 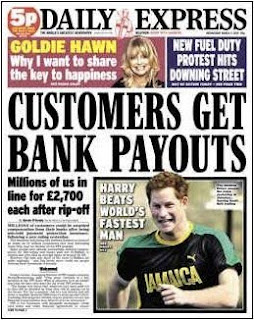 What of Wednesday’s “Customers Get Bank Payouts”, then? After all, the article headline reads “Millions Set For £2,700 Each In Bank Payouts After Rip-Off”. Nope: note the use of “could” in the first paragraph. It’s another recycled piece about Payment Protection Insurance. 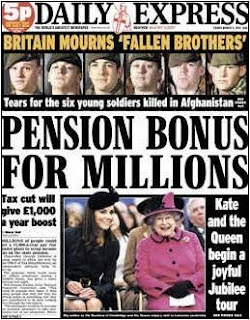 Things didn’t improve on Friday, as the headline roared “Pensions Boost For Millions”. More budget speculation by Macer Hall: folks “could get” more, but then again, they might not. 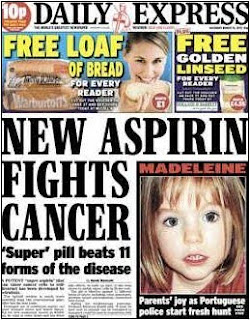 Saturday brought another appearance by Phil Space, with “New Aspirin Fights Cancer”. It does? Sadly, no it doesn’t: “much more research is needed to show whether it’s safe and effective for use in humans”. 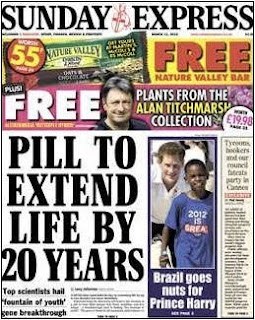 And yet more Harry for Phil Space

And why stop when you’re in the groove? Today has another health revelation from Phil Space, with “Pill To Extend Life By 20 Years”. This is just shameless recycling of a GlaxoSmithKline press release. Note also that “Scientists hope the discovery will lead to the creation of a pill ...”.

Six front page splashes, next to no original content, zero investigative journalism, just a few phone calls and emails to get quotes, and a whole lot of inflation to make very little story go a long, long way. It may be the Express way, but there seems little point in paying money for it.

But it does make a profit for Dirty Des, so while that holds true, it can be called yet another Benchmark Of Excellence.