The increasingly cheap and nasty Express had not managed an EU horror story front page splash for some days, but all has been rectified by Martyn Brown’s piece leading today’s paper. “Now EU Bans Plastic Bags” screams the headline, and regular Express watchers will not be surprised to know that the EU is not banning plastic bags any time soon, and that no fury was sparked last night. 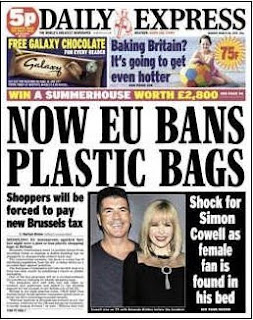 No ban, no tax, no facts, no problem

Granted, there is – as so often – a factual nugget buried somewhere underneath this pile of freshly steaming bovine by-product, but a ban is not in sight. The European Commission has been consulting – the exercise began in May last year – on measures to reduce the amount of plastic waste. Some countries have already acted unilaterally: no free plastic bags on your shopping trips to France.

And this will feed in to a Green Paper, which will, in true EU fashion, lead to yet more discussion before decisions are made. And those decisions will not be made by the dreaded and hated “Eurocrats”, but by agreement between democratically elected representatives of all 27 member states. Even if this goes through by Qualified Majority Voting (QMV) it is very rare for the UK to be in the minority.

This, of course, does not deter the Express, which gets the usual talking head (UKIP MEP Paul Nuttall (maybe Nigel Farage was down the pub)) to engage full why-oh-why mode. The article is rounded off with the magnificently deployed red herring that plastic bags are only 1% of household waste, which ignores the fact that much of the rest can be recycled, while those bags, as the paper concedes, cannot.

And this particular Express crusade has a problem: the editorial line at the rather more influential Daily Mail is all in favour of getting rid of one-trip plastic bags. So when the latter paper lifted the Express news, the story was not only relegated far down the list of priorities, but spun to remind readers that the Mail has been campaigning for the ban for years.

The Maily Telegraph was non-committal, reminding its own readers that there is already a charge for bags in Wales. Business in Cardiff has not come to a standstill. Shoppers in Wrexham are not besieging trains and buses bound for Chester to register their displeasure. Surveys show that some kind of action on the proliferation of plastic bags is popular with the public.

But none of this matters to the Express, where the myth of People In Brussels Talking Foreign Coming To Get Decent Hard Working Ordinary Brits For The Benefit Of Themselves Personally Now must be propagated whenever possible. What’s more, it makes a cheap front page scare story.

And we know what that means when you’re sending another 75 unfortunate hacks down the road to keep your profit margins up. Another Benchmark Of Excellence.

[UPDATE 1700 hours: the claim made by the Express in its front page headline has been examined by the folks at FullFact, who have noted that the EU Green Paper has not yet been published and no decision has been made.

The idea that "Meddling EU bureaucrats" are planning a ban on plastic bags is described as "presumptuous" and the conclusion is reached that, as there has been no decision, the headline "could have given casual readers a misleading impression". Most restrained, those people at FullFact]

You know I thought this sounded awfully familiar and indeed they've already complained about this one:

and here (both at the excellent Tabloid Watch)

I like the way they point out Italy and Ireland have the charge because Italy and Ireland's economies are in trouble, there's this sort of almost suggestion that there must be some sort of link; Charge for bags, kill economy ...

The need of the Express to manufacture outrage about something, anything, must be a strain for their staff at times.