Guido Fawked – Not In The Navvy

The current propensity of the perpetually thirsty Paul Staines and his tame gofer, the flannelled fool Henry Cole, to devote the Guido Fawkes blog to kicking Labour London Mayoral challenger Ken Livingstone knows no bounds. Today, the less than dynamic duo has latched onto an interview Ken did with the London Irish Post, which they call out for being patronising. 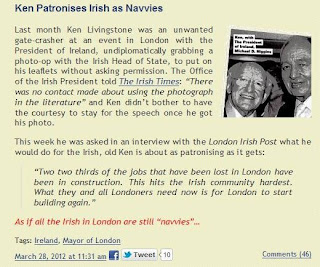 Sadly, the Great Guido and his equally clueless sidekick have not done their homework: not only are workers from the Republic of Ireland represented in the construction industry in proportion to the country’s population, but there are also many more from the Irish Diaspora bolstering their numbers. Livingstone is correct to say that a downturn in construction hits the larger community hard.

Had Staines or Cole ever worked in the civil engineering sector – and here I plead some years’ knowledge – they would know that not just construction sites, but entire businesses, close over Christmas and New Year, often for a fortnight, because many of their workers use that time of year to return to their extended families, and that this involves long and time consuming journeys.

Those journeys now include destinations around eastern and southern Europe, but still include Scotland – and Ireland. And the Fawkes blog has committed another display of ignorance when it tells “Ken Patronises Irish As Navvies”. Workers in the construction sector are not “navvies”, and neither have they been thus called in living memory – well, not within the industry, anyway.

And the idea of the “Irish Navvy”, the nineteenth century figure that is supposed to have proliferated across England as the railways were built, has recently been shown to be a myth. The overwhelming majority of navvies in England were English, and reoccurring reference to the Irish has more to do with latent prejudice – still prevalent into the 1960s – than reality.

So if anyone is patronising the Irish, it’s Staines and Cole for labelling them as having been navvies, when they largely weren’t. One might have thought that Irish citizen Paul Staines would be better clued up on this subject, as well as explaining why the Fawkes blog has not linked to the London Irish Post article. Maybe that’s because it’s called “May the force be with you Ken”.

And the paper has found adversely on the behaviour of Boris Johnson, with the headline “Boris, your attitude stinks”. That was a response to Bozza’s gaffe over the annual St Patrick’s Day Gala Dinner, which the current occasional Mayor called “a dinner for Sinn Fein”. Calls for Boris to apologise went unheeded, and were not echoed by Irish citizen Paul Staines.

Not that he’s a hypocrite, of course. Another fine mess, once again.