Being For The Benefit Of Mr Mosley

The city of Chester had been a solidly Conservative seat – going all the way back to 1910 – when in 1992 Peter Morrison, who had been a stalwart supporter of Margaret Thatcher to the very end, decided to call it a day. His successor, Gyles Brandreth, proved less popular with the voters than the viewers and listeners, and squeaked home by a mere 1100 votes.

Brandreth marked his time as MP with occasional gaffes, such as his forthright declaration of support for the city’s football club, only to commit to making a presentation before kick-off one match day and then getting lost en route to the ground. He lost in 1997 by over 10,000 votes, but in 2010 the Tories regained Chester through the efforts of Stephen Mosley.

So what kinds of causes are espoused by the new MP? Well, he was against the idea of the Alternative Vote (AV), but betrayed a rather tenuous grasp of the subject when he described AV as “a convoluted system that gives some people multiple votes”. It isn’t the only instance of Mosley exhibiting confusion as to his priorities and the limits of his power. 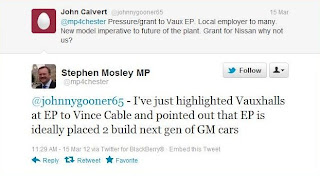 Here he is giving reassurance that he is on the case of the Vauxhall factory at Ellesmere Port, and going as far as to stress that he has been in personal contact with Business Secretary Vince Cable. One might not only feel sympathy for Vince over this piece of shameless opportunism, but also point out that Ellie Port is in the constituency not of Mosley, but Labour’s Andrew Miller. 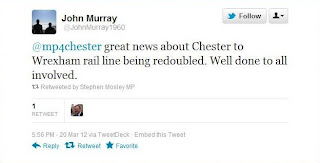 The latter somehow fails to merit a mention, and this is not an isolated occurrence: here, Mosley Retweets the good news that the rail line between Chester and Wrexham is to be returned to double track after another of those ill-judged BR economy measures of the past. But he had nothing to do with the project, which has been approved by the Welsh Assembly Government. 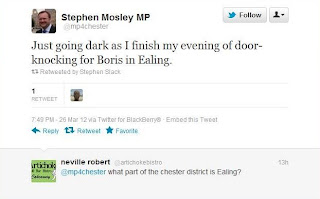 Nor are Mosley’s efforts all being focused on his constituency: yesterday evening he proudly Tweeted that it was “Just going dark as I finish my evening of door-knocking for Boris in Ealing”. Not unreasonably, one of his voters put the question in reply “what part of the Chester district is Ealing?” but reply came there none. But he does show support for local causes. 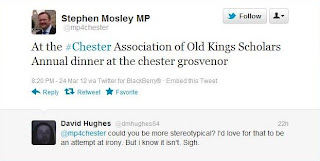 But then, shameless is as shameless does. Voters take note.