Guido Fawked – Bang Out Of Order-Order

After his attempt to gatecrash a Cafod meeting some months ago ended up with his being made the object of ridicule on Liberal Conspiracy, one could have been excused for thinking that the perpetually thirsty Paul Staines, who styles himself Guido Fawkes, might choose his next such stunt with more care. But, as ever with Staines, that thought would have been misplaced.

Because this morning, accompanied by his tame gofer, the flannelled fool Henry Cole – Staines’ technical expertise apparently not up to carrying a camera and working it, following the lead of Gerald Ford – and a further volunteer in a chicken suit, the Great Guido attempted to gatecrash a Ken Livingstone photo-op and interview, to the clear distaste of proper media folk who wish he had desisted.

After the event, the Fawkes blog posted a video of the encounter, but for reasons best known only to the Laurel and Hardy of the blogosphere, the sound has been overdubbed with allegedly hilarious chicken sounds. None of the three managed to get anywhere near a slightly bemused looking Livingstone, who as a result did not complete an interview for LBC.


Moreover, another video posted by the uniformly sound Adam Bienkov showing the aftermath of the stunt does not make good viewing for Staines: the Great Guido is caught on camera repeatedly shouting “you f***ing c***”, and failing to reach the giddy heights of Derek and Clive, while an ITV camerawoman complains that this convocation of idiocy “nearly broke my neck”.

A swift re-definition of reality

So far, so self-defeating, but yet more fascinating was the torrent of jaw-dropping bluff and dishonesty as Staines and Cole fired up their spin machine and attempted to refashion events in their favour. Anyone of dissident opinion was immediately smeared as a “liar”, those minding Livingstone were re-styled “leather-jacketed heavies”, and the chicken suit was a mere “19 year old”.

Someone else was lying, says clown with pants alight

I can’t speak for those at the event, but the thought entered that if the “19 year old” had been (for instance) a rugby player – Cole’s preferred ball game – then he would have had no problem looking after himself. In any case, whoever was inside the suit was, on the basis of the video on the Fawkes blog, not exactly shying away from trouble with his aggressive and pushy approach. 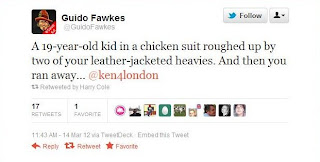 One more proof of Olbermann's dictum

And the camerawoman who Staines and Cole claim not to have knocked over was kneeling down when they arrived, and was indeed knocked to the ground. The less than dynamic duo claims to have footage backing their view, but has been strangely reticent in making it available. And, until and unless they do, the only conclusion that can be reached is that it is they whose pants are well and truly alight. 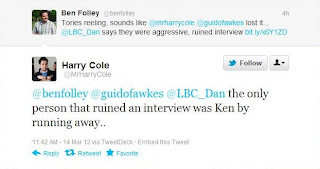 Ken not running anywhere, except for Mayor

Plus they didn’t even make the pro-Boris Standard. Another fine mess.

[UPDATE 15 March 1200 hours: despite Staines and Cole claiming that they had footage in their possession backing up their creative retelling of events, all that has been posted by this less than dynamic duo is their original short and heavily overdubbed clip. The conclusion has to be, therefore, that their pants are still well alight.

Moreover, their stunt has still not made any media ripples, appearing neither on TV, nor with the Boris-supporting Standard. There was not so much as a mention from their pal and purveyor of equally dodgy copy Andrew Gilligan in his latest whingefest at Telegraph Blogs (this doyen of principled right-wingery preferring to suggest he supports a mansion tax).

But Staines is still swearing away, no doubt in the belief that he is the champion of some new comedy genre. He isn't: you can listen to the real article, as Derek and Clive discuss "this bloke came up to me", right HERE (warning: very strong language from the start)]

Confused to why they did this? Are they Campaigners now? Thought they were bloggers. After watching the video it seems they are nothing more than an odious pair of bullies.