While a number of temporarily motivated tribalists continue to peddle the idea that Labour’s mayoral challenger Ken Livingstone’s tax arrangements are some kind of devious plot to defraud the taxman – and sucker some on the centre-left who should know better, as I noted yesterday – there has been a curiously worded intervention from occasional London Mayor Alexander Boris de Pfeffel Johnson. 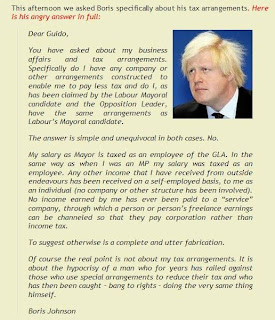 And yet more curiously, Bozza has chosen the Guido Fawkes blog, home to the perpetually thirsty Paul Staines and his tame gofer, the flannelled fool Henry Cole, to transmit his message to the wider world. This has induced a state of ecstasy in the less than dynamic duo such that they have paid even less attention than usual to the wording of Bozza’s rebuttal. That might prove to be unwise.

Let’s take the Boris reply as not only genuine, but also his own words. This is his main point: “Specifically do I have any company or other arrangements constructed to enable me to pay less tax and do I ... have the same arrangements as Labour’s Mayoral candidate ... The answer is simple and unequivocal in both cases. No”.

There are two points arising from that: first, “company or other arrangements constructed to enable me to pay less tax”. Limited companies are not constructed to enable less tax to be paid, so that doesn’t address the question of whether Bozza uses (or used) one. As to whether he has the same arrangements as Livingstone, Bozza is correct to say he does not, because he cannot. If Ken used the word “same”, he was wrong, but had he said “similar”, he could have been right.

Bozza goes on “My salary as Mayor is taxed as an employee of the GLA (this is why he could not have the “same” arrangement as Livingstone, who at present has no permanent full time employment) ... Any other income that I have received ... has been received on a self-employed basis ... (no company or other structure has been involved)”. So he claims not to be using a limited company at present.

But what’s this? “No income earned by me has ever been paid to a ‘service’ company”. Nobody suggested it had (“service” companies are used by freelance workers in full time contracts considered “caught” by IR35, the idea being that it’s better value for money than having your own limited company, doing your own books and hiring your own accountant). He’s answering a question that hasn’t been asked.

Bozza also makes the false corporation tax versus income tax comparison, which suggests someone else does his books. What he does not do is rule out having in the past been paid through a limited company, and nor does he satisfactorily explain how his “chicken feed” from the Maily Telegraph – or any other income – is managed. It’s an awful lot of dosh to deal with on a self-employed basis.

Bozza’s denial is good politics. But it is not totally convincing.