If only there were still such folks as sub-editors at the Express, none of this post would be possible: the mathematics failure at the end would have been rectified, the elementary spelling howler in the first item would have been amended, and the spurious words and title mangling of the other examples would have been excised. But in the cheap and nasty world of Dirty Des, it all gets through. 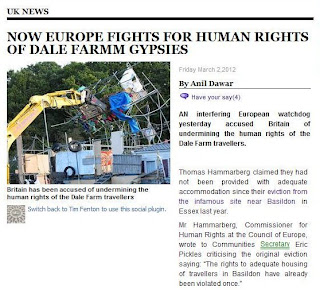 We kick off with a moderately bad one from Anil Dawar, who was clearly so eager to lay into the hated EU over something to do with Gypsies – which means people who are Very Bad Indeed – that the headline came out as “Now Europe Fights For Human Rights Of Dale Farmm Gypsies”. My spoiling chocker highlights that one – surely the Express has one of those? Whatever. Next! 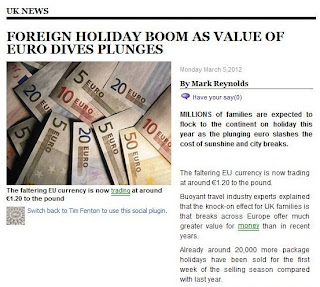 The following Monday it was the turn of Mark Reynolds, and again there was an EU angle as the despised single currency came in for a broadside of ridicule from Des’ finest. “Foreign Holiday Boom As Value Of Euro Dives Plunges” roared the headline. Yes, the Euro, so bad that they slagged it off twice. And that “plunge” is rather less than five per cent. 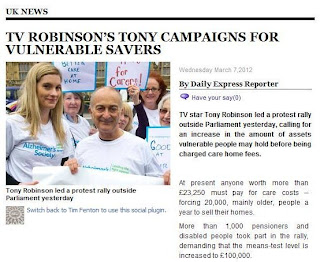 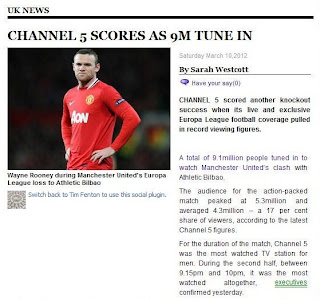 But at least hack Sarah Westcott appeared to get the headline of her Channel 5 promotion piece on Europa League football coverage right today – or did she? “Channel 5 Scores As 9M Tune In” was the triumphant announcement. But what’s this in the text? “The audience ... peaked at 5.3 million and averaged 4.3 million”. So that’s an overstatement by only 3.7 million, then.

And on top of that, it’s a blatant piece of cross-promotion for another part of the Desmond empire, with no mention that Channel 5 and the Express are under the same ownership. But it rounds off this series of howlers nicely, demonstrating what happens when you run a supposedly half decent newspaper in such a cheap and nasty manner.

Meanwhile, Des continues to celebrate his continuing profits and chalks up yet another Benchmark Of Excellence.

Interesting post, undermined somewhat by your apparent ignorance of the fact that newspaper reporters rarely - if ever - write headlines.