How Low Can Des Go?

It was not so long ago that Richard “Dirty” Desmond was boasting of the profitability of his newspaper empire. Thanks to staff cuts which had seen most of the sub-editors sent down the road, and resorting to cobbling much of the Star and Express copy together from press releases, second hand news from other titles, and trawling online sources, costs had been brought down dramatically. Presses rolling for how much longer?

But recent events in the Sunday paper market, with Rupe’s downmarket troops bringing out the Super Soaraway Sunday Steamer, have changed all that. Des’ finest have got into a price war with the Murdoch press – never a good move – and some pundits were dropped recently from the Daily Star Sunday. Now comes talk of taking the axe to costs once again. 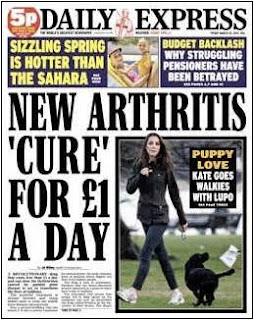 The inevitable thought then enters: just how much more can be cut? To demonstrate just how cheap and nasty the Desmond titles have already become, one need look no further than today’s Daily Express and Daily Star, and their bargain basement front page splashes. The Express has – to no surprise – gone with yet another Miracle Cure, which reveals a key weakness.

And that is the target demographic for the paper, which is older folk: it’s an audience that is likely to shrink as more people entering that age range bring their habit of reading something other than the Express, with many more getting the habit of obtaining their news from online sources. They are unlikely to be impressed with a lead story recycled from a press release. 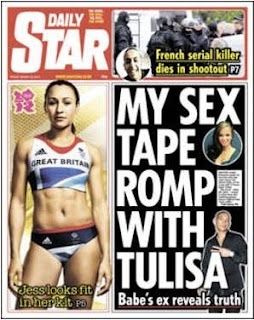 Things are little better at the Star, where the lead “My Sex Tape Romp With Tulisa”, suggesting that her ex has spoken to the paper, reveals nothing of the sort. It consists of recycled material already in the public domain, a trawl of someone’s Twitter feed, and two quotes from “sources” which give every impression of having been made up in the newsroom.

The rest of the two front covers – mainly Kate walking her dog and Jessica Ennis modelling the Team GB Olympic strip – is all over every other tabloid. There’s no stand-out reason why anyone should choose either title over, say, the Daily Mail, Mirror or Sun. The Desmond press is already at rock bottom when it comes to the standard of its copy. Any lower and they might as well shut up shop.

One other route could be taken, and that is to turn both titles into seven day operations, much as the Mirror and Sun are now run. But the amount this would save is questionable, as the Guardian report points out. Or, of course, Des could sell up, but might find his titles, after all the cuts, not as valuable as he wished.

A once great newspaper washed up with nowhere to go? That’ll be another Benchmark Of Excellence.

[UPDATE 1900 hours: the Guardian's Mark Sweeney has Tweeted that Northern and Shell, Desmond's company that controls the Express papers and his magazines, is to cut around 15% of its editorial staff, or around 75 posts. So those papers really will be getting cheaper and nastier]