Rupert Murdoch made his name running newspapers. He still clearly retains great affection for titles like the Sun, which he took over back in 1969, but his more upmarket Times and Sunday Times are losing serious amounts of money, he had no compunction in closing down the Screws in the wake of Phonehackgate, and some 70% of News Corp’s money now comes from other sources. 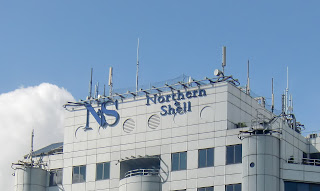 Why this is important is that the question is now being asked: what if Rupe pulled the plug and span off his UK newspapers? Had the thought been aired before the July 2009 revelations by Nick Davies in the Guardian, the idea would have been laughed off as the idlest and least informed of speculation. Not any more, especially as News Corp shares would almost certainly gain in value as a result.

So who is talking about selling off the Times and Sun titles? Well, Rupe’s headquarters troops in New York are, that’s who: once again, rival news provider Bloomberg has the story, citing Chief Operating Officer (COO) Chase Carey having talks about two options. These are merely to separate the newspaper unit from the rest of News Corp – or outright sale.

Talk of newspaper selloffs also made the news at Deadline Hollywood, as they pointed out that the departure of Murdoch Junior from News International could be a sign that the troubled UK titles could be offloaded. It would make sense, with the hacking saga now being joined by accusations of bribing the Police and computers being routinely accessed by illegal means.

But who might buy? The Sun, now a seven day operation, is at present profitable and will be so for some years, despite gradual falls in circulation and cost pressures on journalism, and so there should be competition to get hold of the title. But the Times and Sunday Times would be a challenge, with few Russian oligarchs in the wings, and only the readership to play for.

It’s entirely possible that the Times and ST could be bought just for the name, and subsumed into another upmarket title, maybe the Telegraph, though the Guardian could not be excluded – it would depend on the price. At the front of the queue for the Sun would be Richard “Dirty” Desmond, who has offered to buy before, and that will fill the hacks with dread.

Desmond is widely considered the worst proprietor in modern times, Robert Maxwell included. But if Rupe is willing to close the Screws, he will have no trouble offloading the red top on to Dirty Des, whose existing stable of Express and Daily Star titles has the cheapest and nastiest hackery on the national market, bar none. And it would park the criminality outside the building. Just a thought, Sun people.