That corner of the Fourth Estate owned by Richard “Dirty” Desmond continues to confirm that it is run on a shoestring: front page splashes are routinely recycled from press releases, pure conjecture, or inflated from the smallest nugget of information into something eye-catching enough to get the punters to select that title as they browse around the news stand. 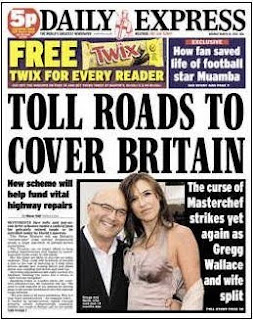 Yesterday was no different at the Express, as readers were offered the frightener “Toll Roads To Cover Britain”, for which there was no evidence whatever: as I pointed out, Young Dave’s punt on getting outside interests to invest in the country’s road network prompted more questions than it answered. Things have not improved overnight, though, and nor has the cheapness and desperation. 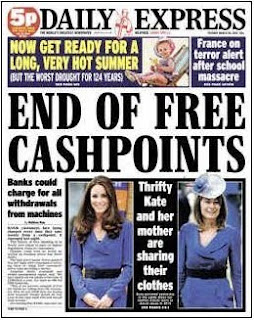 “End Of Free Cashpoints” screams today’s front page (along with Kate and Mum photo filler and another of those notoriously inaccurate weather predictions). So one might think that banks were going to charge for cash withdrawals – or were at least talking about it. But the sight of Nathan Rao’s name on the by-line (taking a break from the weather stories?) shows that the thought would be misplaced.

As usual with the Express, this news “emerged last night”, although apparently this time fury did not erupt. Readers are then told that there may also be charges for setting up direct debits and standing orders. It looks serious at first, until you notice that the story has been cobbled together by taking banks’ profit figures (down over the past year) and adding in a few talking heads.

There are two “experts” – one from her own firm, the other unattributed – a few quotes from someone at KPMG who has wisely qualified and hedged his words, and someone from Move Your Money to pass adverse comment on the perceived antics of rotten and greedy bankers. But one source of information is thus far missing: anyone actually representing the banking industry.

Only at the very end is a speaker from the British Bankers’ Association allowed to get a word in, and Lesley McLeod kicks the Express guff into touch by stating “None of our members have indicated that they intend to end free banking”. So there is no “End Of Free Cashpoints” in sight. This story is just another confirmation that the Express no longer does serious or even credible investigative journalism.

Still, the headline fits nicely on the page alongside the Kate’n’Mum fash pic, and no doubt a few unsuspecting punters picked the Express off the shelf and paid good money for it as a result, so that means it’s yet another Benchmark Of Excellence.