Whitney And The Star

For her fans, the recent death of singer Whitney Houston was a sad and difficult moment, the passing at such an early age of someone so well-known and popular, but for the cheaper and nastier end of the Fourth Estate, it was an opportunity for moving a few more papers at very little cost. And papers don’t come much cheaper and nastier than the Daily Star. 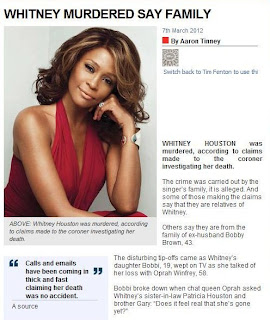 So it should surprise no-one to see today’s story, under the by-line of Aaron Tinney, declaring “Whitney Murdered Say Family”. It looks unequivocal and conclusive, but then, so do many other headlines on Dirty Des’ papers, only to turn out to be anything but. And watchers of the Desmond press will be equally unsurprised to discover that this is not even yesterday’s news, but last week’s.

Moreover, the idea that the assertion that Ms Houston’s death was other than accidental has come from anonymous tip-offs: the Star is assuming that one or more of these were from family members, or going on rumour or hearsay. No-one in the singer’s extended family has gone on the record to make an allegation of that nature, so all the Star has is the word of a few cranks.

Only at the end of the Star piece do readers get the key name, that of former lawyer Nancy Grace, now host on CNN’s sister channel HLN (she has the 8pm Eastern weekday slot). Recently, she and the rest of the HLN evening line-up boosted their ratings (they usually trail in fourth in the cable news stakes) by covering the Casey Anthony murder trial, and pontificating at length on it.

Needless to say, the verdict, when it came, did not accord with Ms Grace’s wishes, and she was visibly annoyed at the inability of the jurors to act in accordance with her superior insights. The thought that she got it wrong was not allowed to enter. And she was equally upfront last Thursday when guest hosting ABC daytime show The View, when the subject turned to Whitney Houston.

Some of the exchanges on that show might be of interest to Daily Star watchers. View regulars Barbara Walters and Joy Behar suggested that Ms Grace’s speculation that Ms Houston was pushed underwater was for ratings (as with the Casey Anthony trial). When the guest host said she was going over the purposes of an autopsy, Ms Behar shot back “but this isn’t an autopsy, this is a television show!”.

And later, when pressed by Barbara Walters, Ms Grace conceded “I don’t think she was pushed underwater”. But this detail has not made the Star: instead, Ms Grace’s quotes have been selected to fit the story, a few forums and chatrooms have been visited to dredge up more material, with the reheated mess duly served as news.

Last Thursday’s rumour and a few anonymous comments whipped up to create a low cost shocker? That’ll be another Benchmark of Excellence.