Ever since the days of the Soviet Union, and its two major newspapers Pravda (“Truth”) and Isvestia (“News”), any media source claiming to bring “the truth” to its readers has had a problem, especially if it is known to be playing to its own agenda. Papers like the Mail are shameless enough to know that they can con enough readers to make it worthwhile. Others are merely desperate.

And in the latter category are the perpetually thirsty Paul Staines and his tame gofer, the flannelled fool Henry Cole, at the Guido Fawkes blog. So keen are they to bang the drum for London’s occasional Mayor Alexander Boris de Pfeffel Johnson that churning over a blatant piece of planted PR does not present a problem. Nor does actually engaging brain first. 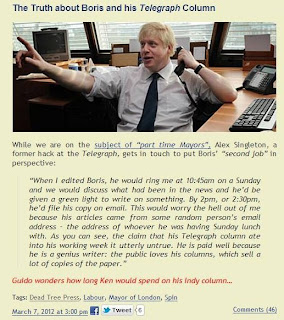 The less than dynamic duo have been contacted by former Telegraph man Alex Singleton, whose political leanings can be ascertained by observing his former status as Research Director of the Adam Smith Institute (ASI), the well known museum of economic thought which has fraudulently appropriated the name of the founder of economics, and his closeness to the so-called Taxpayers’ Alliance (TPA).

So, given Singleton’s background and his present berth as a PR spinner, it is blindingly obvious that there will be more spin on the ball than a Shane Warne flipper. But Staines and Cole have been caught playing down the wrong line, and Singleton has got this one through their non-existent defence, with his tale of wonder writer Bozza cobbling his column together over Sunday lunch.

Folks are expected to believe that Bozza rattled up his copy in less than three hours, which also includes time for that lunch, together with any travelling time and the customary socialising with whichever family friend was being visited. No doubt he dictated his column while laying the table or keeping the children amused when at home, or developed a technique for typing while washing up.

While this would explain the clear and persistent lack of research – he’s not known as the upmarket Littlejohn for nothing – the idea that Bozza is so adjacent to superhuman status that he can generate copy over Sunday lunch is jaw-droppingly ridiculous. Moreover, it raises serious questions over the credibility of whoever decided this was worth £250k a year, however wonderful the outcome.

And it doesn’t explain how Bozza still manages to be less than clued up on far too many of the issues put to him at Mayor’s Question Time (MQT), where the impression is all too frequently given that he is blustering and winging it through the sessions. Is he distracted by other demands on his time? Sadly, the Fawkes blog will not be investigating any other Bozza income streams any time soon.

Not that they’re blinkered tribalists, of course. Another fine mess, once again.

[UPDATE March 8: even though the flannelled fool Cole never looks in on Zelo Street, and would never obsessively follow someone else's blog and Twitter feed, especially as he is so fond of accusing others of doing that to him, he has miraculously not only read what I posted, but has found time to comment. Twice.

Sadly, the abuse is of little originality: Cole repeats his "stalker" smear, but with an upgrade to the more refined "cyber stalker". He also describes me as a "pikey", which merely confirms what an unpleasant and desperate individual he is.

Cole does, though, redeem himself a little by later favouring me with the characterisation "our friend in the North", although if he believes this will stop me finding adversely upon his clueless tribalism and gullible spin recycling, he has another think coming.

What I first posted here stands without amendment: the Fawkes blog has taken PR spin and churned it without any engagement of brain taking place. That is a problem not for me, but the clueless buffoon who did the churning. Another fine mess]

Love the implication that Boris is unable to operate his own email account and has to access and use the private email accounts of which ever friend he happens to be spending sunday lunch with.

Of course he does.

Cole and Staines are such obedient and pliant mouthpieces, along with being suppliers of seedy, gossip to their tabloid paymasters.

All so utterly transparent.