Back in April 2004, Richard “Dirty” Desmond was in a meeting with bosses from the Telegraph. Being discussed was the potential bid for the Tel from German firm Axel Springer. Des became abusive. He swore profusely. His tirade would not have been out of place at a Daily Mail editorial conference. He then proceeded to accuse all Germans of being Nazis, and goose-stepped around the room.

When Telegraph CEO Jeremy Deedes passed adverse comment, Des offered him the chance to step outside. The Telegraph executives soon tired of this display and walked out, before ensuring the news reached the Guardian. But, it seems, the ability to mention Germany in the most unfortunate circumstances has not left the room, as a glance at today’s stories on the Express website confirms.

All media outlets have been following events in the French city of Toulouse, where a gunman riding a scooter had previously killed a number of soldiers before shooting four people dead outside a Jewish school on Monday. The attacks at the school were particularly brutal and brought the whole French law enforcement machine into play. Early this morning the suspect was cornered. 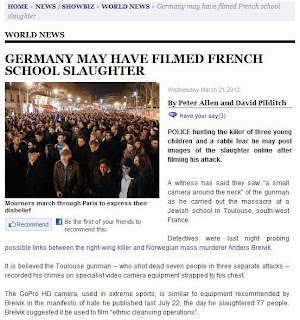 The Express, though, is as ever a step behind with its news, and is still reporting on the aftermath of Monday’s events. It was believed that the gunman had a small video camera slung around his neck, leading to speculation that he could have filmed the attacks with the possibility of posting them online later. And then came the Express transformation of “Gunman” into another G-word.

“Germany May Have Filmed French School Slaughter” announced the headline this morning, at the top of the piece carrying the joint by-line of Peter Allen and David Pilditch. Yes, it’s those chippy-bombing Germans again! The spirit of Dirty Des has well and truly seeped into the conscious of his dwindling band of hacks and other hangers-on. Thus yet another Benchmark Of Excellence!

[UPDATE 1050 hours: the Express has now amended its title to read "Gunman" instead of "Germany". Sadly for this belated attempt to cover their tracks, I took a screenshot, as did MacGuffin at the excellent Tabloid Watch blog. Must try harder, Express people]
Posted by Tim Fenton at 10:10

The URL is still 'Germany' http://www.express.co.uk/posts/view/309425/Germany-may-have-filmed-French-school-slaughter