Another day in the ever-developing bullying scandal that is enveloping the Tory Party, and another “exclusive” for the Sun’s alleged “Westminster Correspondent” Harry Cole, who has produced an email exchange which he grandly proclaims shows that those at the top of the party were aware of Mark Clarke’s tendency to improper behaviour. But all is not as it seems; readers have been sold only the edited version. 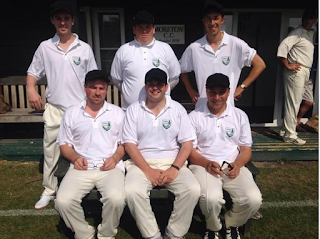 Harry Cole (front centre) and Mark Clarke (front right) a month after their falling out. Or maybe not

While readers are told “A CONSERVATIVE Party chief warned Tatler Tory Mark Clarke he should smile at people and get ‘someone else to shoot them’ after he was accused of bullying … Activist Josh Hitchens complained about Clarke to party bosses just two months before he was made boss of RoadTrip … But his email was immediately forwarded to then-Chief of Staff Paul Abbott”, that is not quite the whole story.

Abbott was chief of staff only to Grant “Spiv” Shapps. He hardly qualifies as a “Party chief”. But there was another revelation: Abbott allegedly “leaked the complaint to Clarke, warning: ‘FYI. Maybe do this on the phone in future?’ He added: ‘Might be safer press-wise for you to go around smiling at people, and getting someone else to shoot them.’ … Mr Abbott told Clarke to use ally Andre Walker to do his dirty work as ‘Andre would be excellent at shooting people’”. 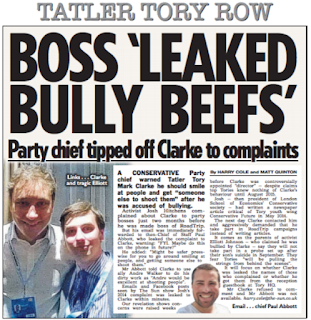 That is what Sun readers are being told, but an examination of the email shows there is plenty that they are not. For starters, the message from Hitchens to Oliver Wells talks about another email, which it seems originated from Clarke. Why is this only talked about, yet not shown? And the two emails shown are not contiguous.

Did Wells forward Hitchens’ email direct to Paul Abbott? If so, then why not include it? And if not, what are we not being shown? This thread has been heavily edited, yet not only is there no explanation why that should be, we know that none will be forthcoming. And it gets worse: once again, Cole appears to be getting his information from someone very close to the centre of the scandal - Mark Clarke himself. 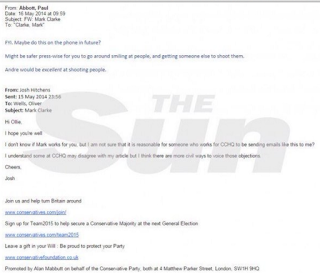 Who else could have supplied the emails to the Sun? It makes little sense for Abbott, or André Walker, both of whom come out of this story looking very bad indeed, to be the source. The only other possible explanation is that the Tories have supplied it to the Sun, which, given the media storm surrounding the party’s machinations, beggars belief. This looks like Clarke trying to drag his former pals down with him.

The article also throws in the most ridiculous red herrings, such as “[the Tories’ inquiry] will focus on whether Clarke was leaked the names of those who complained or whether he got them from the reception guestbook at Tory HQ”. Since when did reception guestbooks get used for recording complaints? And why is the Sun’s management not asking Cole why he is apparently using their paper to spin for his old pal?

Harry Cole is again being seriously economical with the actualité. That’s not good enough.
Posted by Tim Fenton at 11:05

Christ, Tim. You must've had your tongue firmly in your cheek with that one.

Sun's management? Know what's going on? Since when did that start? They know nothing, see nothing, hear nothing except for the declining sales chart. (Im)Plausible deniability old chap!

As we learned at Leveson et al, neither the Murdoch family or their management have any idea what goes on in their business.

Never mind. When they eventually lose print they can turn to online for survival. Oh. No. They. Can't.

Didn't you know? I thought you knew! said...

Those emails could have ended up at Sun HQ by hacking.
I'm willing to wager it has been going on for years.
Journalists don't have to reveal sources. This gives them licence to do what they like.
Bring in the reigns and watch it stop.

Cole has been heard boasting at parties about how he's best pals with the Chancellor and others. How he can do as he likes. He threatens his victims but arranges much worse to happen to them. Lawyers and others are currently investigating his mephedrone mate and Worshipful Suet Pudding.