Yesterday evening, in the reassuringly upmarket surroundings of 200 Aldgate, the Contrarian Prize was awarded to Rochdale’s nominally Labour MP Simon Danczuk, who was accompanied for the occasion by his former sidekick Matt Baker, whom he generously described as his “Co-conspirator” in producing the book Smile For The Camera. No mention was made of John Walker, who originally gave Danczuk the idea. 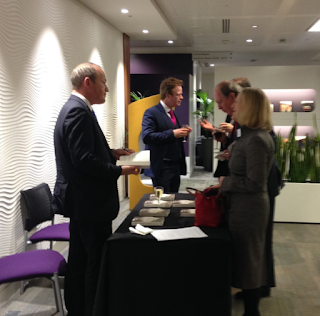 Simon Danczuk and Matt Baker attempt to flog a few more books. This was more important to the MP than the Commons debate on Syria

Danczuk made a number of highly creative assertions during his speech, during which he claimed that his three predecessors as Rochdale MP “ignored” child abuse, something he himself did until Paul Waugh, and Walker, brought his attention to it. He also made accusations against the late Tom Driberg, which some may find interesting.

Driberg was openly gay - Private Eye magazine, for whom he provided the crossword over many years under the pseudonym Tiresias, occasionally called him “Tom Gayberg” - but there were no claims, certainly not in his lifetime, that he had abused children. One has to hope that Danczuk and Baker can back up their allegation. 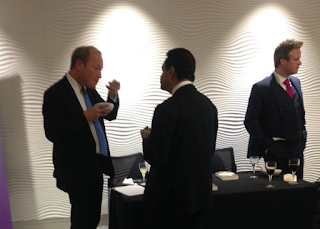 But it was Danczuk’s attitude to the debate on air strikes against ISIS in Syria which will shock his supporters and detractors alike. After suggesting that he was experiencing a “media backlash” for taking a strong stand on child abuse - rather than being called out for dodgy claims and lack of loyalty to his party leadership - came the food and drink.

The canapés, it was agreed by all present, were rather good. Danczuk indulged himself as if he had not had a square meal for some time. He and Baker also displayed considerable signs of thirst when the wine began to flow: I am told that Baker became noticeably unsteady on his feet, while Danczuk “was glugging it back like a student at a free bar”. 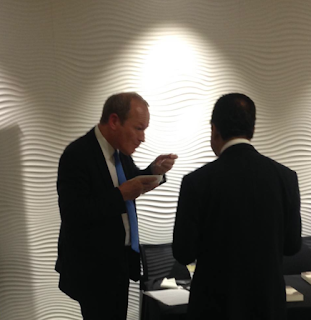 And another canapé bites the dust

Have a think about that. Simon Danczuk, who was asked by his local constituency party to vote against air strikes on Syria, and who decided very publicly that he would take no notice of them, nor of all those voters in Rochdale who have declared their opposition to the idea, could not be bothered to even attend the debate in Parliament.

Instead, he was using the Contrarian Prize presentation to burnish his ego, fill his face, and get himself tight. Stuff the voters. Stuff the local Labour Party members who opposed bombing Syria. He would just turn up, cast his vote as he had already decided, and stagger back to his nearby flat. Behold the true face of “Rochdale’s MP”.
Posted by Tim Fenton at 10:37


So Danczuk did finally turn up to vote, though I don't think he had been in attendance in the HoC during the day and no, certainly was not there while he was delivering his talk in the evening. Had the vote been scheduled for the same time as his self-promoting talk, who knows what he would have done? Not that listening to any debate mattered to Simon Danczuk, who had stated he would vote YES regardless. Well, can't have him on the same side as his leader Corbyn, can we? Danczuk had 'listened' to experts (who?) he claimed and also claimed he had consulted the electorate by knocking on doors in his constituency, though oddly for him, he didn't post any photos of doing that (in his cloth cap, the one he saves for local campaigning, him being a man of the northern working class and all that.) If anyone was doorstepped by Danczuk, and asked if they wanted him to vote in favour of bombing, can they come forward now? And tell us if normally they vote Tory anyhow?

Loved that "...highly creative assertions..." bit. When I was at school it was called "lying."

Mind you, it slotted perfectly with Benn's disgusting diatribe, which was equally "highly creative." His parents knew a thing or two about peace, social justice and decency. A tragedy it never rubbed off on their son. No wonder the hissing lizard Hammond was virtually onanistic.

It's all par for the course now. Last night an RAF bonehead claimed that 400 bombing raids had not suffered a single civilian casualty. How he knew that is unclear. But anyone who believes it is living in cloud cuckoo land.

Danksuck? Just grist to the neocon mill. Every time I see a photograph of the fellow I feel an urgent need to take a power shower. I hope the local party members have made note of his activities and jettison him as soon as they can....always assuming people like Benn don't come to his "rescue." What a pair of tenth rate arseheads.

Lost in the feverish condemnation of all things Corbyn is that he has actually been a very democratic leader. Instead he is condemned for this by an increasingly hyperventilating fascist media and many in Labour. The real Benn speech about bombing when innocents will be surely be killed is the one given by Tony Benn
https://www.youtube.com/watch?v=HfXmpJRZPYI