The Super Soaraway Currant Bun has made a miraculous discovery today: the hated BBC does work for an external body, and then gets paid for it. Hold the front page! Who knew about that one, then? But Rupe’s downmarket troops are also adept in the application of spin, and so it came to pass that readers were “exclusively” told “BBC’s secret £2m funding exposed within obscure EU scheme”. 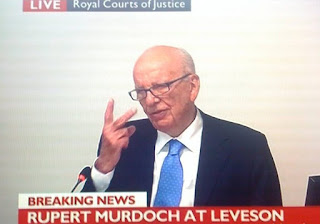 Yes, this funding was so obscure that the information about it was fully transparent and readily available, unlike, oh I dunno, the amounts of wedge being bunged to a number of enterprising characters in exchange for their expertise in hacking and tapping phones, obtaining stuff off the Police National Computer, getting hold of NHS records, going through folks’ dustbins, and having them followed.

But the Sun is deadly serious: “Broadcaster received £71,000 per month over a 30-month period”. Well under £1 million a year, when, as the paper admits, “The broadcaster already receives almost £5billion from UK public funds and commercial activities each year” (already dwarfed by Sky’s £7.6billion for 2014, which the Sun doesn’t mention, and by sheer coincidence, Creepy Uncle Rupe has a 39% stake in it).

So the Sun is whining about an amount of less than one-fiftieth of one per cent of the BBC’s income. But on it drones: “The BBC has kept hidden from the public the fact that it asked the EU for the cash … The windfall is not mentioned in its annual report, on its website, press releases or on any other BBC info outlet”. And, as Jon Stewart might have said, two things here. One, “the cash” was payment for work.

That, in other words, is the same as the Sun would do: bill a third party for work done. And two, as this is payment for completed work, there is no “windfall”. And the spin is all too predictable: “Now MPs fear the BBC’s relationship with the EU could lead to bias in the In/Out referendum debate”. How many MPs? One. Try again.

“The Sun on Sunday can also reveal the BBC will air a one-hour documentary on British Euroscepticism ‘in the couple of weeks before the referendum’, presented by left-wing journalist Jacques Peretti”. Peretti is so left-wing that a documentary he made for BBC2 recently garnered a positive write-up in the Daily Mail.

What the Sun is not telling its readers is that its ultimate boss - Rupert Murdoch - met with George Osborne twice in June, just before the BBC was hit with a licence fee settlement that amounted to a significant cut. On top of that, between the General Election and that settlement, Osborne also met with senior Murdoch executives on four occasions. Then the licence fee deal was mysteriously leaked to the Murdoch Sunday Times.

No, the Sun doesn’t want to go there. Instead, it wants its readers to “look over there” at some work the Beeb is doing for an external organisation, because it’s the EU. Then it can spin it as some kind of rotten conspiracy, while making sure nobody looks too closely at how Murdoch is bending his newly compliant pals in the Tory Party to his will.

And he’s the one making the serious money. What you will not read in the Sun.
Posted by Tim Fenton at 14:47

What I would like to know is when we can here about the blackmailing tactics used from media company to other media companies.

I was doing some crimbo shopping recently, I was trying to avoid the canvassers that were clogging up the precinct with their christmas begging bowl heart string pulling which served to take advantage of peoples good festive cheer.

I was collared twice and one was for charity donations which I replied "it's christmas, money is a bit....well, you know.

Tge second was "Can I interest you in our services for ......
I cut him off, I said, " If its SKY , you've got no chance. I wont go near them because of Murdoch".
It turned out to be Talk-Talk- Something else Murdoch and his mates do a lot without thinking.

I'm on benefits, why would I subscribe to an arrogant ba****d service who in their other sources (rags) refer to us as lazy scroungers?

Same with any other shysters that come knocking my door and asking if I want to subscribe to their newspaper delivery service.

Get lost. You shite on the very people you expect to keep you afloat.
You create hystetiain some circumstances to give yourselves more writing material.
Your interest is in helping yourselves.

Why don't you take a shovel and bury yourselves once and for all because if you dont, plenty of others will.

Murdoch of course has never produced anything or worked a day in his life. All he's ever done is leech off other people. The same goes for everyone who "works" for him. All of them are conmen and conwomen, spivs who contribute absolutely nothing to civilised life.

If it wasn't for sports Sky would be bankrupt tomorrow. Which is why Murdoch gushes hysterical amounts of (borrowed) money at them.

Similarly, if he and his boot lickers didn't vomit far right propaganda they wouldn't be funded by Wall Street. And they might have to find some socially useful work, though I doubt they have either the nous or ability to even empty bins.

In short, like all the other Hearsts and Northcliffes before him (and those to follow), he's a cancer on society. The sooner he joins Leon Brittan, Geoffrey Howe and Thatcher the better. The world will have a better chance of improvement without him and them and their type in it.

But you might as well get ready for the replacements because at the present rate they'll be even worse. The long slow slide to fascism will continue until enough people organise and call a halt to it. It isn't as if there are no precedents.

A few days ago the Times ran an article bemoaning the fact that all the main terrestrial channels will be broadcasting quite a few repeats over the Christmas period. I suppose lack of space prevented the paper mentioning all the repeats on the various Sky channels. Funny that!

Whilst we should remember that Murdoch and other media are part of the 1% whos business brings in to the economy we are reminded and can see the damage they inflict to do it. Hint taken.

It's like having to pay for policemen to cart us away.

If we had a choice most would probably rather not.

We can't control where all money comes from or where it goes but dirty money is of concern.

It's like the old "We are just reporting the news". Yes and some of them go further than that.

Concerns of bias in some circles is constantly being pointed out.

Opinion writers take to twitter and give them their due some will debate their writings but this can have an affect on those who disagree pointing their anger at the organisation they work for. As it would.

I often wonder of lawyers and those in the legal professions and question whether their professional opinion matches their personal opinion?

Perfectly reasonable to think about it.

The thing about Sky is that it's selling exclusivity. If it didn't exist, you'd still be getting top flight sport and Game of Thrones - just on the terrestrial channels instead. What you're buying - originally with the basic Sky package, these days with Sky Atlantic and so on - is the exclusivity, the chance to watch these things before your next door neighbour does. To be in the clubhouse, the other side of the rope, beyond the door marked private. It doesn't matter if the walls are bare and the service rubbish - you're inside and that git from next door isn't.

Back in 2010 as part of his People's Manifesto tour, Mark Thomas proposed making Sky subscriptions for the unemployed illegal - after all, it was a substantial amount of benefit going on what was undoubtedly an extravagance of a luxury. Who could possibly argue against the logic of that! It would also have the added benefit of forcing the Sun to campaign for the right of unemployed people to sit on their arses all day watching telly.

I think many viewing figures are dropping. Why?
People are choosing to view the world in reality rather than the TV. That said, there is a backlash against Murdoch and many are ditching his and others offerings.
The Leveson inquiry brought to light just 'some' of what went on.
There is much, much more.

The Fresh Prints of Delaire said...

I really wish you would stop attacking my paymaster.

You are really fuc**** up my chances of being left anything in his will.

How is a person supposed to survive?

Viewing figures are dropping because TV channels are multiplying, as are methods of viewing such as iPlayer, box sets and other online services that are hard to monitor usage figures for; while the actual viewing audience (and the time it has available) remains roughly the same, but with its attention stretched increasingly thinner. This also means that money is spread further, meaning a general decline in the amount of quality programming, and an increasing reliance on repeats and cheap tat. Those production outfits that can afford to invest (BBC, HBO, Sky...) begin to stand out like skyscrapers dotting a barren and featureless plain, attract more money, and so it continues. Eventually you'll have a two-speed broadcast system with a few mass-producers and millions of minnows, effectively broadcasting from a shed somewhere, returning the playing field to what it originally was. But this time around you'll be paying more.

There should be more choice but not charging for a load of programs at once.
Pay per view. There are many possibilities for TV future. The smart TV is a sign of it.