The Murdoch Sun is well-known for being economical with the actualité. But rarely has one of its stories unravelled as rapidly as “6 days to terror: Damning report as Sun investigator smuggles himself from Turkey to Paris … EXCLUSIVE: Our man travels 2,000 miles across Europe without passport”, which features the journey of Emile Ghessen from Turkey to Paris - just like those alleged terrorists.

Readers were told “A SUN investigator has managed to smuggle himself 2,000 miles from Turkey to Paris in just six days without showing his passport … In a damning exposure of Europe’s lax borders, Emile Ghessen, 34, paid smugglers to get to Greece by boat before travelling up the continent … It is a similar journey to Paris IS suicide bombers Ahmad al Mohammad and M al Mahmod”. Er, no it isn’t.

Ghessen tells of crossing into Croatia “I take my chances and go to the regular station to buy a one-way ticket to Croatian city Zagreb … I expect to be hauled off by police but am left alone to board. The train stops about a mile into the journey and border officers come on to check passports … But I hide in the toilets, leaving the door unlocked so it looks unoccupied … After a tense wait I hear the cops leave the train and we move off”.

And how did he get out of Croatia? “I TAKE a series of trains up to Paris, dodging the guards on the way … I begin with one to Munich through Slovenia and Austria where there are no passport checks”. Except the one out of Croatia wasn’t a train, was it, Sun people? And he didn’t get through Croatia without a passport. Ghessen got through Croatia so easily because he did have a passport. A British one. And it was checked. 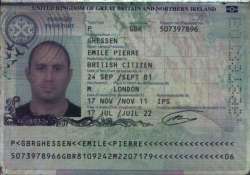 Here is what the Sun calls "without passport"

We know this as the Croatian Interior Ministry not only checked his passport, but took a scan of it. They reported “Croatian border police registered Emile Pierre Ghessen on 23 November at 2.10 pm at the Tovarnik railway border crossing where he entered the Republic of Croatia, and on 24 November at 5.20 pm at the Zagreb Airport border crossing, where he exited the Republic of Croatia”.

That explains why the Sun article does not identify the border crossing: Ghessen is already dissembling. Moreover, he exited the country not on a train, but an aircraft. Small wonder he got from Zagreb to Paris in one day, despite changing trains so many times. And I don’t buy this “Fifteen minutes before arriving into Paris, I step off at a quiet station to avoid checks in the busy city centre” claim either.

He had to turn up in the “busy city centre” to be photographed outside the Bataclan theatre - and how many overnight trains stop off at a “quiet station” just out of town? The Croatian Interior Ministry evidence alone is enough to show that the Sun has published a pack of lies, and the IPSO code has been shot through. But don’t expect the “toughest press regulator in the Western world” to do any more than wipe the Sun’s arse over it.

The Sun won’t even get a fine for that one. And that’s not good enough.

[UPDATE1 7 December 1125 hours: the Sun has now taken down the online version of its story, as the chorus of condemnation reaches a crescendo.

While the Croatian Interior Minister observed "I am glad when the police quickly finds liars like these, so-called professional journalists, and catch them lying about hiding in a toilet where they belong, together with the newspapers which employ them", the questions kept on coming.

Why is it left to a foreign Government to call out the Sun for its abysmal "journalism"?

Was the article written to satisfy an agenda, or did the Sun give Emile Ghessen a free hand, exercising no editorial interference?

Where are editor Tony Gallagher, managing editor Stig Abell, PR man Dylan Sharpe, and CEO Rebekah Brooks, when the title needs someone to defend it?

And on top of that, why were the obvious howlers in the story about the journey from Zagreb to Munich - which it now appears Ghessen made not by train, but by plane - not picked up on?

For instance, all trains crossing from Austria into Germany at locations such as Salzburg are being stopped, and passports checked. There is no way Ghessen could have evaded the check.

His passport was checked at Zagreb Airport at 1720 hours on 24 November. There was a flight to Paris departing at 1755 hours, and one an hour later to Munich. Which one of those was he on? Remember, his name will be on the passenger list for one of them.

The Sun appears to have not bothered to check this story against known facts. It would benefit all at the paper, were they to come clean and explain themselves. But they won't.

That's because Gallagher, Abell, Sharpe and Ms Brooks are a bunch of cowards. No change there, then]

[UPDATE2 7 December 1610 hours: it has now been advised by a Zelo Street regular that Emile Ghessen could not possibly have travelled from Zagreb to Munich by train on the day he claimed.

There is only one Zagreb to Munich connection, and it involves changing trains at Villach (there were through coaches until September this year).

The timetable is also clearly annotated with a warning message for those connecting in Salzburg, where Ghessen would have crossed from Austria into Germany, which translates more or less as "Because of passport controls before boarding in Salzburg all passengers are requested to be at the train in good time before departure (at least 15 minutes)".

And on the day Ghessen claimed to travel, there was overhead line damage between Dorfgastein and Schwarzach-St Veit, which meant rail replacement buses were in operation over that stretch - and the extended journey time means Ghessen would have missed his connection in Salzburg.

Had he actually travelled by train, you would think he might have noticed all of that. It is now clear that he didn't - and flew from Zagreb, either all the way to Paris CDG, or Munich.

Either way, the Sun did not bother to fact check its story and published an ever bigger pack of lies than first thought. Hello Tony Gallagher, Stig Abell, Dylan Sharpe and Rebekah Brooks]
Posted by Tim Fenton at 14:10

The Sun - full of more bullshit than the fields around Hereford.

The Scum can only get away with its daily lies because IPSO will do nothing or next to nothing or issue the usual standard format bullshit.

Anyone want to make book on how long it will be before we get yet another Murdoch-induced scandal?

I wonder if he claimed all journies on expenses? Perhaps a copy of his claim form would help dispel any discrepancies? it's not as though he is paying public servants for information which in the past seems to have been paid out in cash with no real questions asked.

Talk of arse wiping.
I watched an episode of Royals Family the other night called the Golden egg cup. Piers Morgan gets a special mention when Jim pays a visit to the Karzi.
Ha, I won't spoil it. Try and watch it.
I laughed so hard.

Not so fast, lefty scum! It's a well-known fact in Murdochland that the Croatian Interior Ministry is claiming they checked his passport because Croatia is a notorious hub of Corbynistas and terrorist synthesisers inspired by the works of the evil 80s tribute band Daesh Mode.
Check your facts!

Brilliant quote from the Croatian Interior Minister Ranko Ostojić:
"I am glad when the police quickly finds liars like these, so-called professional journalists, and catch them lying about hiding in a toilet where they belong, together with the newspapers which employ them."

I see how this will go, IPSO will of course only take a complaint about accuracy if the person featured in the story complains about it.... Let me guess if the journalist will complain

I don't think that's right. IPSO are rubbish, but they do in fact take complaints from unaffected parties (I know, because I've done it).

Another small spanner in the works is the fact that all direct trains east-Austria-Munich have been suspended since late September. Everything is stopped at Salzburg with strict passport checks before boarding other trains to Munich. It's causing mayhem for thousands of cross border commuters - and the roads outside are the same.

But even before this crisis kicked off, the alledged journey from Zagreb was a bit suspicious. He says he began with a train to Munich (not to somewhere else and changed for Munich). There were only 2 direct trains. One was an overnight sleeper, not mentioned, and the other was very early and continued to Stuttgart for the Paris connection, again no mention of Stuttgart. However, DB were, and still are, running more direct services Zagreb-Munich which are easy to find on the internet but you need to look carefully at the notes - BECAUSE THEY ARE BUSES!!! The journey times of those would fit. And they are checked at the border. Whoops!


Instead of IPSO can I suggest another tack. What about Trading Standards? Phrases like "merchantable quality" and "fit for purpose" spring to mind.


And going way off piste - if anyone has booked a ski holiday in Austria, west of Zell am See, with a flight to Salzburg expect the transfer to take longer because the short cut across Germany now has long queues for passport checks.

passing through Zagreb Airport departure security at 17:20 would be just right for AF1561 to Paris at 17:55

"Sun investigator" "Our man". Not any more.

A spokesman for the Sun said: “The Sun is currently investigating concerns that have been raised about this story.

“The journalist concerned is not a member of the Sun’s staff but a freelance documentary maker, whose work has been used by national broadcasters, newspapers and websites.”

And I don’t buy this “Fifteen minutes before arriving into Paris, I step off at a quiet station to avoid checks in the busy city centre” claim either....He had to turn up in the “busy city centre” to be photographed outside the Bataclan theatre - and how many overnight trains stop off at a “quiet station” just out of town?

I think most, possibly all, the remaining French overnight trains terminate at Bercy rather than going all the way into Gare de Lyon, Gare de l'Est, or wherever. Also, TGVs that route past Paris usually stop somewhere in the grande couronne, both to serve the suburbs and for interconnection. So that's not impossible.

I don't think you can get a sleeper from Munich now, as they usually withdraw them once a TGV service is set up. Having had a look at the German railways' web site I couldn't find an overnight train, rather than a connection that left me somewhere in the small hours, and I didn't see any options that stopped anywhere after Metz either. (Actually when I took an overnight train on that route in 2002 it didn't stop anywhere in France after Strasbourg either).

It's such a fine line between Setting the Agenda and Tomorrow's Fish Wrapper, isn't it?

Christmas time?
Ask SKY BET if they will take a wager.
Could be fun.